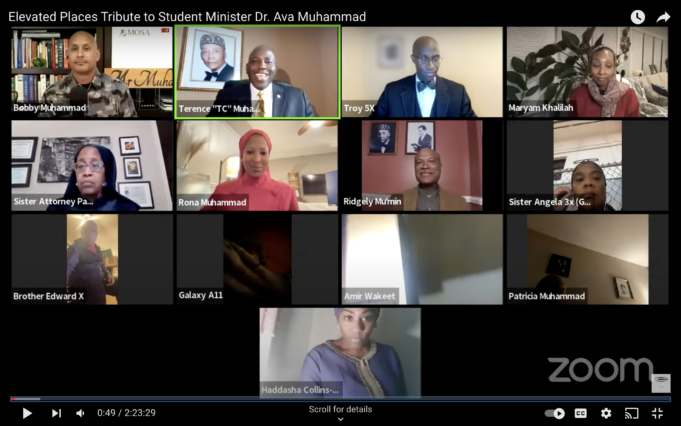 Sister Ava Muhammad is known for her work in elevating the discourse on Islam, particularly in the Black community.  Her weekly Thursday night show provided a platform for critical thought and analysis on various topics, from theology to politics to business to much, much more.

The Elevated Places team expressed their gratitude for Sister Ava’s contributions to the show, taken from the seventh surah or chapter of the Holy Qur’an, “Al-A’raf” or “The Elevated Places.” The team shared their personal experiences of working with her.  They also underscored the importance of her work in promoting understanding and cooperation between Muslims and the Black community.

The program was a fitting tribute to an essential voice in the Muslim community. Student Minister Dr. Ava Muhammad, National Spokesperson for the Honorable Minister Louis Farrakhan and the Nation of Islam departed this life August 25, 2002. However, her legacy and impact continues to be felt by those who labored with her in the cause of freedom, justice and equality.

Sister Ava was an incredible woman who dedicated her life to the upliftment of the Black community.  Her work on her radio show focused on problem-solving rather than repeating the multiple problems confronting Black people.  This demonstrated her commitment to her community.  Her love for her audience was evident and will be greatly missed.  The tribute to her by her staff showed how much she meant to those who knew her and how much her work has impacted the world.

During the September 29 tribute program, her staff said, “Thank you, Sister Ava, for everything.”

“Sister Ava’s light will never go out,” said Sister Rona Muhammad, the show’s executive producer and co-host of the tribute.  The long-running show has impacted the lives of its participants in positive ways, helping them to become better people. The format of the show, a round table discussion, allows for various guests with different backgrounds and perspectives to be heard.

Sister Rona noted that the Elevated Places program significantly impacted Saviours’ Day as the program for years kicked off the weekend Nation of Islam convention in front of a live studio audience.

Brother Reuben Muhammad from Australia served as the Elevated Places international correspondent and was a special guest during the virtual tribute.  He remarked on the global nature of the Nation of Islam, noting that he first became acquainted with Sister Ava through a cassette tape of Rock & Roll Hall of Fame rap group Public Enemy.

Brother Rueben added that the spirit of Sister Ava lives on and that the Elevated Places program truly helped create a global community.

Brother Darius Muhammad, the husband of Sister Ava, thanked the friends, family, and believers who have shown him such overwhelming support over the past month. The couple was married for 33 years. Their daughter Sister Cherelle shared with viewers that she looked forward to continued progress.

“It feels good to see all the love that my mom had. My mother used to always speak to me about continual progress. Continual progress means overcoming and gradually getting better with time,” said Sister Cherelle.

Technical assistant Brother Troy 5X and Sister Deanna Muhammad noted that Minister Ava was the female version of the Honorable Minister Louis Farrakhan. Her aide Sister Donna Muhammad encouraged listeners to continue to support Minister Ava by purchasing her books, and her audio and video messages at ministerava.com. She also noted that more books by Minister Ava were in the pipeline.

Social media has become a powerful tool for communicating and sharing information.  For Sister Aneesa Muhammad, managing Sister Ava’s social media platforms is part of her job as an educator and outreach coordinator. “My task is to make Sister Ava’s great commission known via social media,” she said. “The work does not stop.”

Sister Aneesa Muhammad talked about Sister Ava’s mighty work of education and enlightenment.  As part of her outreach efforts, Sister Aneesa noted she uses social media to connect with people who might be interested in learning more about Minister Ava and her great work. She also uses social media to share Minister Ava’s books and resources with the broader community.

Terence Muhammad served as Sister Ava’s co-host on Elevated Places for many years and shared heartfelt comments about his experience working with her. Throughout the special broadcast the staff spoke on how the Elevated Places team was part of a family.  Most of all, they talked about Sister Ava as a jewel and a calm, beautiful spirit. They all want to continue her work and are grateful for the experience.

Student Minister Abdul Haleem Muhammad, Southwest Regional Minister of the Nation of Islam and close friends of Sister Ava and Bro. Darius,  shared remarks. A fellow student in the ministry of Minister Farrakhan, he spoke about how Sister Ava was the standard in defense of and articulation for the Minister. Sister Ava was a pure vessel who always strived to do what was right,” he told the audience.

The Zoom portion of the broadcast ended with a beautiful video tribute to Sister Ava’s life.  The video featured clips of her speaking, footage of her smiling and laughing with friends and loved ones.  It was a beautiful reminder of how much Student Minister Dr. Ava Muhammad impacted the lives of those around her.—Michael Z. Muhammad, Contributing Writer