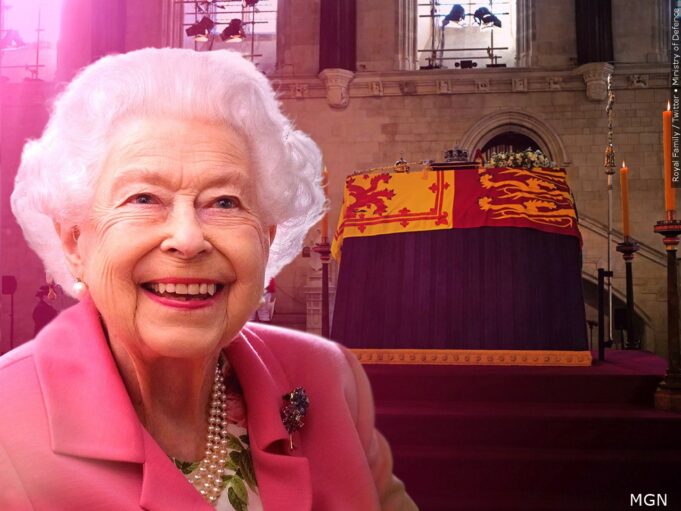 While the United Kingdom has crowned a new King after the death of long-time monarch Queen Elizabeth II who died after 70 years on the throne, thoughts and opinions varied about the late 96-year-old, her successor son, King Charles III, and the once great British Empire she reigned over.

History is best qualified to reward all research and answer all questions. Observers, scholars, and historians are busy evaluating Queen Elizabeth II since her death. Despite some comments of approval, such “sentimental expressions” are woefully misplaced considering the extensive sordid history of the empire she inherited and ruled, which came at the expense of the darker nations of the Earth. It cannot be overlooked that Great Britain has drenched the planet with the people’s blood of Africa, the Caribbean, and other remote places.

“There are mixed reactions in Jamaica,” said Roselea Hamilton, founding director of the Institute of Law and Economics in Kingston, and coordinator with the Advocates Network, a pro-reparations group.

“There are people connected to the Queen and feel a sense of loss, and that’s mainly the older generation. But I would say that the majority, the younger people who grew up during the independence era and beyond, there is not a similar connection,” she explained.

Jamaica is one of several countries that make up the Commonwealth grouping of former British colonies.

Ms. Hamilton told The Final Call, there is a strong push for reparations and an apology for British atrocities levied on Black people. There is outrage that Queen Elizabeth, as head of state, refused to recognize crimes against humanity were committed.“During the period in which she was alive, she had an opportunity to begin that process of reparatory justice,” said Ms. Hamilton.

When she ascended to the throne after the death of her father King George VI in 1952 more than a quarter of the world’s population was under British imperial rule in Africa, the Caribbean, South America, the Middle East, Asia and the Pacific Islands.

“We should shed no tears for the passing of Queen Elizabeth,” said Dr. Gerald Horne, professor of history at the University of Houston. “The Crown in London … was responsible for all manner of atrocities, including playing a leading role in the African slave trade, which deposited our ancestors in this alien land,” he told The Final Call.  “Not to mention the fact that during her seven-decade long tenure, you saw that her majesty’s government … presided over depredations in Kenya, including mass arrests, castrations, land seizures, et cetera,” said Dr. Horne.

Her reign was responsible for dislodging the government of Cheddi Jagan in Guyana, South America, a former British colony, “stirring up antagonisms” between citizens of African descent and South Asian descent, he noted.

Under Elizabeth II, her Governor General in the small Caribbean nation of Granada helped facilitate the 1983 U.S. invasion that resulted in the brutal assassinations of Granada’s leader Maurice Bishop and members of his government. This is only a small glimpse of royal crime and misdemeanors.

“So instead of shedding tears, we should be demanding more insistently reparations from these thieves,” said Dr. Horne.

Forbes estimated the personal net worth of Queen Elizabeth II at death was $500 million. However, the family’s assets are estimated at $28 billion, citing a business front known as “Monarchy PLC” or “The Firm.”  The UK-based Financial Times said the family’s lucrative land holdings managed by the Crown Estate include luxurious London properties, farmlands, and countryside estates worth $17.9 billion. The accumulation of the wealth kept in the Monarchy runs back centuries.

They waxed rich from years of imperialism, exploitation, slavery, and domination. All manner of jewels and thousands of cultural artifacts boosted by Britain fill British and western museums. One of the jewels in the late queen’s possession is “The Great Star of Africa,” a 530-carat jewel that was reportedly stolen from South Africa in 1905 and estimated to be worth $400 million.

The Imperial State Crown also reportedly includes a 317-carat diamond known as “The Second Star of Africa.” There are rising demands for gemstones to be returned to South Africa. Both stones were cut from the same diamond known as “The Cullinan Diamond.” But the worst violation was the theft and destruction of enslaved Africans in the western hemisphere.

The transition of the British monarchy comes amid a time of change and decline of White world rule and wicked rulers reaping what they have sown worldwide. The Honorable Minister Louis Farrakhan of the Nation of Islam warned about the fate of nations and the fall of Europe and America—the offspring of Great Britain.

“What does the United Kingdom and Europe owe to those whom they formerly enslaved and colonized? Well, if the Biblical law of justice is applied, ‘a life for a life’: Tens of millions of us have been destroyed in the Middle Passage of the Trans-Atlantic Slave Trade; tens of millions of us have been destroyed on the African continent,” Minister Farrakhan pointed out, in a special August 5, 2017, video message to the “Africa International Day of Action” in London’s Kennington Park. The Minister has been barred from entering Britain since 1986.

“If Europe were to pay for the lives of Black and Brown and Red and Yellow people who have lost their lives under colonialism and slavery, I don’t think too many Europeans, White Europeans, would be left if that law were applied. And then when you think of what Europe gained from our enslavement,” said Minister Farrakhan.

In his enlightening book, “The Fall of America,” the Most Honorable Elijah Muhammad, the Eternal Leader of the Nation of Islam, described the manifest loss as: “A Great Time! A Troublesome Time! A Terrible Time!”

“The rulers of this world must be removed, and the crown must be taken off and placed upon another head, and they will rule in justice and righteousness,” the Most Honorable Elijah Muhammad wrote. He compared the wicked rule to the treacherous biblical rule of Nebuchadnezzar, who boasted about his far-reaching borders.

“England made the same boast. England used to boast that the sun did not set on her empire. Take a look at England, today. There is no British Empire for the sun or moon to set on,” said the Most Honorable Elijah Muhammad.

He said the leaders have now become extremely wicked and fearful of the consequences of their own rule. In June, while representing his mother at a Commonwealth Summit in Rwanda, then-Prince Charles said: “I cannot describe the depths of my personal sorrow at the suffering of so many, as I continue to deepen my own understanding of slavery’s enduring impact.” As in other occasions, however, he stopped short of a formal apology or addressing reparations for Britain’s past atrocities that have added to the coffers of the so-called royal family.

There were recent acknowledgments by different European monarchs of historical abuses. Some observers say these are simply attempts to score “woke brownie points” among the victims.

“The question always becomes how substantive is that gesture if it is not followed up by substantive activity, as it relates to world change,” said Dr. Harry Singleton, professor of African American Studies and Religious Studies at the University of South Carolina.

The question for Europeans has always been whether they are willing to practically engage in processes that would radically change the social landscape with African people of a “so called inferior relating to a so called superior,” said Dr. Singleton.

For Queen Elizabeth II, the past transgressions of her empire were never acknowledged.

“She died unrepentant for the various, numerous and sundry crimes of the British Empire,” said Abdul Hakeem Muhammad, student European Regional Minister for the Nation of Islam.

The London-based Student Minister said her lack of remorse comes from a sense of entitlement. “She never saw it as a wicked act because as far as she was concerned, she was divinely ordained,” he said.

The days of “pomp and circumstance” associated with the royal funeral, the enthronement of a king, and reverence from around the globe, doesn’t disinfect the stains of British culpability in centuries of White World rule, argue reparatory justice advocates.

The Commonwealth, reparations, and justice

The death of Queen Elizabeth raises questions among Commonwealth nations, formed by her father and predecessor King George VI. For some African and Caribbean nations, the grouping still resembles an economic umbilical cord.

“It does give Africa and the Caribbean an opportunity to really check themselves and determine how they would like to go forward,” said Student Minister Abdul Hakeem Muhammad.

“Do they want to continue under the leadership of another monarchy? Or is it a perfect time to break ranks with the monarchy and chart a destiny, a course, for themselves?” he asked.

Several Commonwealth nations, particularly in the Caribbean, are actively cutting the umbilical cord to the monarchy like the eastern Caribbean Island of Barbados did in November 2021.

Robust discussion to sever ties have been occurring in Jamaica where landlessness, an unequal education system, and unprecedented levels of crime and violence are seen as conditions rooted in past colonialism.

“So, for us, it’s an important symbolism to end that colonial era, finally. It should have occurred from independence … to move towards establishing Jamaica as a Republic,” said Ms. Hamilton.

Before Queen Elizabeth was buried, Gaston Browne, prime minister of Antigua and Barbuda, announced a referendum to break ties and become a republic will be held by 2025.

In media remarks Sept. 10, Mr. Browne said the move is not “an act of hostility … but it is the final step to complete that circle of independence, to ensure that we are truly a sovereign nation.”

“The need for a referendum is a real impediment,” Grace Carrington, a research fellow at the UCL Institute of the Americas, told The Guardian. “Almost always in the region, they get centered around the political personalities rather than the issue—and the leader who called the referendum loses the next election,” she said. “It’s not always a smart political decision.”

But the time in history has arrived when every nation must answer the law of justice, explained Minister Farrakhan. “This is a universe constructed on the balance of justice. So, any nation or civilization whose evil outweighs its good, it’s only a matter of time before the force of justice and truth that undergirds this universe will move against that nation, that empire, that individual who exceeds the limits,” warned Minister Farrakhan.

“That doesn’t bode well for the present-day world for what it has earned. What do you owe? You owe us everything. But of course, you can’t pay with all your lives; you can’t pay with the ill-gotten wealth that you have and what you’ve stored away for the rainy day. But you must pay,” he said.

Minister Farrakhan stated to Black people in Britain and other European capitals that there is “no more future” in Great Britain because “Great Britain is not as great” as it once was. If she can’t produce jobs for her own unemployed, where is your future?” he reasoned.

An advocate for a united Caribbean and a united state of Africa, Minister Farrakhan said unity and separation from Europe is paramount under a vision of a United Caribbean, a United Africa—not still colonized—but controlling its own resources and producing products for self, and others through trade and commerce to develop our own economies.

“You’re not thinking like that, but you’re going to be forced to think like that,” said Minister Farrakhan.