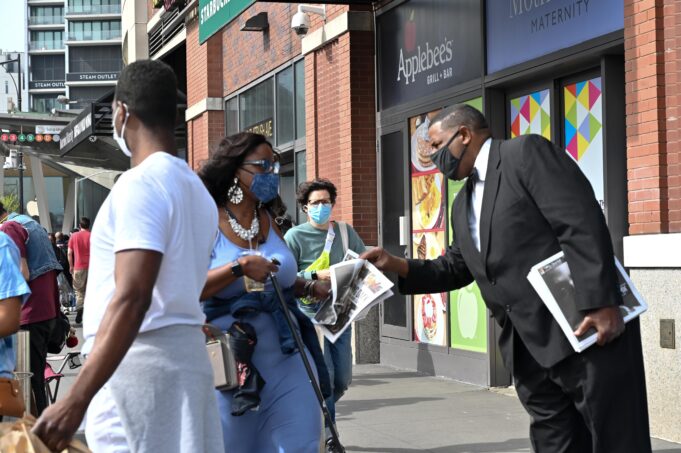 BROOKLYN—When thousands of fans and family attended the celebration of life services for legendary rapper Earl “DMX” Simmons, outside fans from far and near packed the streets of Brooklyn around the Barclays Center in late April. They blasted music from cars, trucks and a steady procession of several thousand motorcycles representing Ruff Ryders and DMX from over 400 chapters worldwide.

DMX, the Yonkers, New York native and member of the Ruff Ryders record label who became known in the late 90’s for his raspy voice and hard-core delivery of street life in his songs passed away April 9. He was 50.

A trek of 28 miles from Yonkers Raceway in Westchester to the Barclays Center in Brooklyn shut down roadways and traffic in his honor. Throngs of peaceful fans honored the memory of Dark Man X (DMX) with clothing, masks, and other items with the DMX insignia.

The Fruit of Islam, men of the Nation of Islam, secured the outside venue with such professional etiquette and organized poise that it was commended by high brass of the NYC Police Department.

“The Mighty FOI from the Eastern Region distributed 7,000 Final Call newspapers on Saturday which were complimentary gifts of love from The Honorable Minister Louis Farrakhan at the Barclays Center on April 24,” said Abdul Rasul Muhammad, Final Call General Manager.

Busta Rhymes, another rap great who has achieved chart topping acclaim again with his latest album “Extinction Level Event 2: The Wrath of God,” called DMX “one of the most transparent human beings” he had met in his life.

“That brother had no politically correct filters with him and that’s something that we lack.  There is such a condition in always having to say the right things or acting the right way according to other people’s standards or the powers that be.  I love DMX the most for not only being one of the truest and purest people that I met good, bad or indifferent but what I love even more so from him was his genuine love for all walks of life,” said Busta Rhymes.

“DMX meant everything to me. He was one of my closest friends, he was my brother. In a nutshell all I want to say is DMX was probably one of the greatest and the most powerful components as an artist, as a man and as a climate shifter of the culture that has existed in the current time and space,” he added,

On social media, photos of the FOI in New York distributing copies of the complimentary newspaper featuring DMX on the cover were posted and shared. Those who received the “gift of love” were appreciative of the keepsake. —Daleel Jabir Muhammad