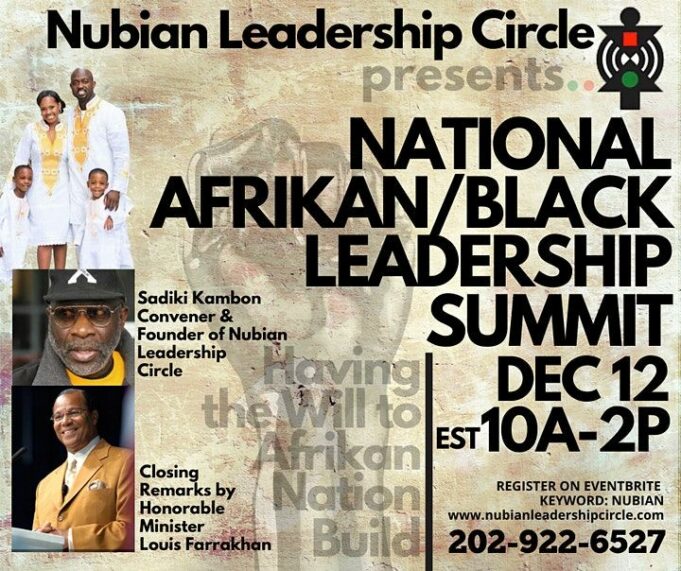 A virtual summit is bringing together Black thought leaders to discuss unity in serving the needs of Black people across the country and parts of the world. The upcoming Dec. 12 gathering—with the theme “Having The Will To Afrikan Nation Build!”—is being convened by the Nubian Leadership Circle, a nationwide alliance of Black leadership groups and organizations.

“The primary mandate of the NLC is to build Umoja (Unity) among Afrikan/Black organizations to provide a structure that promotes a ‘power base’ that protects and defends our rights,” said the Nubian Leadership Circle.

“The essential principle of operational unity is ‘unity without uniformity’ in functional terms,” said the Nubian Leadership Circle. This allows organizations to “retain their autonomy and independence” while working collaboratively on issues, programs, projects, and initiatives in the interest of the community, said the group.

Mr. Kambon sees the Nubian Leadership Circle in the mode of the National African American Leadership Summit which began convening leaders and organizations in nationwide meetings in the 1990s.

He was influenced and motivated by the efforts the group made to bring leaders together. As a former leader with the group, Mr. Kambon sees the Nubian Leadership Circle as a continuation of the effort.

He credited the Honorable Minister Louis Farrakhan of the Nation of Islam with being a major proponent of the unity being fostered. Min. Farrakhan will deliver closing remarks at the virtual summit which will include presentations by Harvard University scholar Dr. Cornel West, Dr. E. Faye Williams, national president of the National Congress of Black Women, Mr. Kambon and others.

The gathering’s theme—“Having The Will To Afrikan Nation Build!”—speaks to the need to envision and create a Black future.

“I would say that Black people have always had challenges,” said Dr. Williams. “But the difference in then and now is that many believed, many of us thought that things were getting better for our people.”

However, she continued, under President Donald Trump, Blacks saw that was not really true.

“This last election showed us that nearly one-half of this nation hates us with a vengeance,” said Dr. Williams. It’s important the leaders come together in a time of growing disparity between the haves and have-nots, she argued. Blacks are facing losses or negative outcomes in everything from food security, health care and housing to education and a loss of jobs compounded by the devastating coronavirus pandemic.

“We at one time looked out for our people, but now we have too many selfish leaders that look out for themselves,” Dr. Williams said.

Many initiatives launched and reliable services offered by organizations before the pandemic have been slowed or halted, which brought added need for a call to unity, said summit organizers.

“We have to come together to figure out how to help our people who are suffering more than usual,” stressed Dr. Williams. It will take a unified effort to meet the challenges Blacks are facing, she said.

An aim for the one day gathering is to facilitate unity, build a “common base of operations” and develop a blueprint that individual organizations can use with collective Nubian Leadership Circle support. The idea is to pool and create resources that will sustain the Black community from within and lessen reliance on outside support, explained Mr. Kambon.

Mr. Kambon, who is based in Boston, pointed to an example of unity and winning in his city. A primary Boston shopping center named after Thomas Dudley, a colonial Massachusetts governor, has been renamed Nubian Square. Although some naysayers dismissed the move as a “symbolic act,” his group also formed the Nubian Business Group which has a say in economic ventures at the shopping center.

The work of the summit is born out of the desire to duplicate what was done in Boston and dispel negative attitudes about what Blacks can achieve, said Mr. Kambon.

The summit includes youth involvement, not as a separate component, but with full participation. He said when youth are in a separate unit, they are often times “isolated and ignored” when it comes to decision-making and direction.

“What we’re saying is that anyone from 15 and up, when they register, they can sign up for any one of the cadres they want, and not be isolated and ignored,” said Mr. Kambon.

The Nubian Leadership Circle will be divided into seven areas or cadres: Spiritual Renewal; Health and Education; Land and Food; Economic Development; Arts and Culture; Family Essence; and Communication Technology.

The 2020 Nubian Leadership Circle Virtual Conference is Dec. 12, 10 a.m. to 2:30 p.m. EST and open to the public. For more information and registration, visit www.nubianleadershipcircle.com.