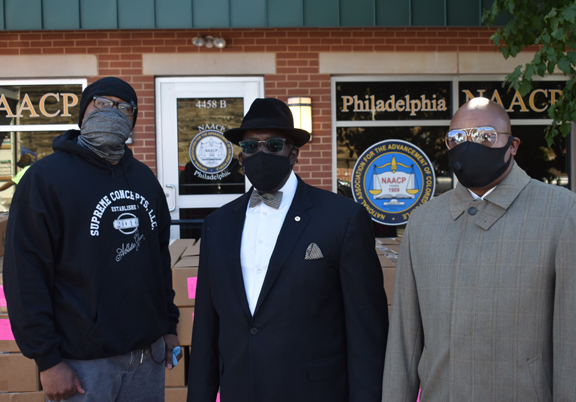 PHILADELPHIA—Across the street from the legendary Muhammad’s Kitchen in the Wayne Junction section of the city, the FOI (Fruit of Islam, the men of the Nation of Islam) from Mosque No. 12 returned to the streets as they paired with other community organizations to feed the needy.

“Early on when Covid-19 set in, there has been food giveaways throughout the city, and we decided as the Philadelphia NAACP branch to partner with the Sheriff’s Department,” said Rodney Muhammad, president of the Philadelphia chapter of the NAACP. He also serves as student minister of Mosque No. 12. “After it was planned, the FOI got the word they could go back on the street. So we wanted to have the FOI partner with the sheriff’s department also for this food giveaway,” he told The Final Call.

For many, it was a pleasure to see the FOI back on the street doing what they do best, assisting the community. “It’s great to see the FOI partnering with the sheriff’s department, the Guardian Civic League, and other organizations. There is a huge demand as you can see,” State Senator Sharif Street told The Final Call.  “A lot of folks need food. Food insecurity is a real issue, and I’m glad that Sheriff Bilal put this together, and we are supporting her. It’s right across the street from my district office,” said Senator Street.

“We wanted to make sure no one goes hungry, so we paired up with  Friends for Care, our food distributor, Local 57, FOP, NAACP, Mosque No. 12, Guardian Civic league, and the Police Department Explorers,” said Philadelphia Sheriff Rochelle Bilal who planned the event.

“We are happy to be a part. We have been anxious to get out. We got the word from our Supreme Captain we could return to the streets, and this was a golden opportunity to partner with other community organizations to do this,” said Student Minister Rodney Muhammad. “Along with the food giveaway, gun locks and school backpacks were also given out to over 400 families. Mosque  No. 12 will be participating in many food giveaways during the upcoming holidays,” he added.