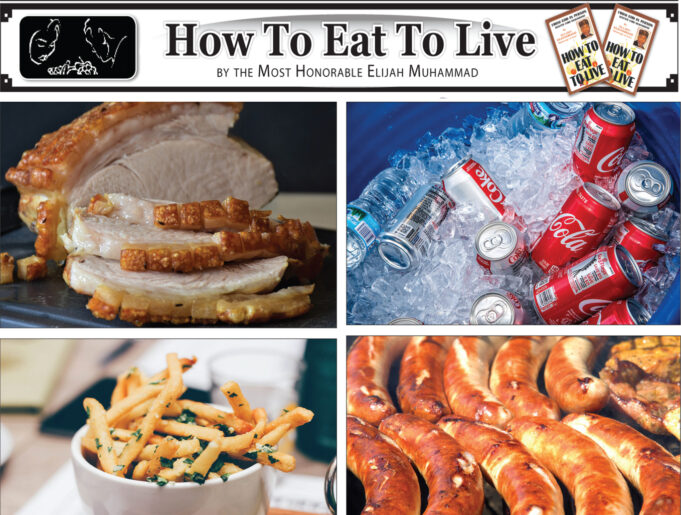 The number one thing you should not eat is the hog (swine). You should also not eat field peas, lima beans, soy beans, bad stale beef (rotten beef), frozen stale turkey and chicken (Some of the turkey has been in cold storage so long that when it is thawed, it begins to disintegrate).

Try eating fresh food and do not eat stale, rotten food that will destroy your health— keeping the doctor around your home trying to administer drugs for the poison you have eaten, which you could have avoided—and take you to your grave very quickly.

There is also bad, stale fish for sale—all but rotten—that some of you buy and eat. Do not eat such rotten food, if you want to live long. If you want to live a short life, that is up to you. Eating bad food will soon shorten your life.

Some of you buy meats from the Jewish stores and some of you believe that all the Jewish people are religious Orthodox Jews and will not eat or sell bad meats, but you are wrong. There are “Christian” Jews who will eat everything and drink almost everything. The merchandise of these Jews must be shunned, if you desire to live.

We use the name Orthodox to refer to religious Jews who want to follow the law of Moses, their prophet, and who want to eat the food that he prescribed for them.

The Holy Qur’an teaches us that their food (meaning the food of the religious Jews) is good for us and our food is good for them. That is true, so long as both of us are eating the food that Allah prescribes.

Do not hasten the cooking of your food—not even your bread. Bread should be baked slowly, so that it will bake thoroughly. Do not eat freshly baked bread; let it be at least a day or two old. There is no such thing as stale bread. When the bread is a day or two old, it is better for our stomachs.

Eat the kind of vegetables that are prescribed for you in this book and do not eat nuts of any kind. They are not good for us. They are too hard on our digestive systems.

Bad food causes us to look old. The skin of those who eat such bad foods is tight and drawn. All the foods mentioned above are bad for our appearance.

The hog takes away the beautiful appearance of people and takes away their shyness. The people who eat the hog have no shyness because they eat the hog. Nature did not give the hog any shyness. God, in the Person of Master Fard Muhammad, taught me that the scientists have found that the hog carries 999 poisonous germs in it and they are not 100 percent poison, but nearly 1000 percent poison. The swine takes away our life gradually and creates worms in our bodies.

The worms eat away our digestive tracts and cause bad thinking, because once they get into the spinal cord, they make their way to the brain and there they begin to affect the way of thinking, until they have eaten your life away. They are parasitic worms, referred to as pork or trichina worms. They cannot be seen by the naked eye—only under a microscope. They destroy three one-hundredths percent of the beauty appearance of the eater, besides giving him fever, chills and headaches. Hay-fever is also common among swine eaters.

To drink whiskey, beer and wine when they have a high alcoholic content is against your and my health. These drinks have a tendency to be habit forming. When we become habitual drinkers, we are destroying our lives. If you want to live, you should not drink such beverages. You should not even drink a lot of soda pop. Some intelligent people will not drink one bottle of soda pop.

There are many bad drinks. Some water is poisonous for us to drink. There is water even in Chicago that is not good for our health. It is not pure enough. Water should be at least 99 percent pure in order for it to be good for humans to drink.

If you want to live, stop smoking and chewing the poisonous weed (tobacco). Some of us are foolish enough to refer to our parents who chewed it and were 75 or 80 years old. That does not mean it was not harming them. Any medical scientist will tell you that the tobacco weed is a very poisonous weed.

The poison it contains is called nicotine. The full extent of the poisonous nicotine has not yet been known to scientists. Nicotine produces a tar-like substance wherever it is used—on the lips, fingers and in the mouth all the way down to the lungs.

Manufacturers are trying to put something like a filter on cigarettes that will keep the nicotine from going into your mouth, but this will not prevent you from getting some of it into your body. Tobacco is a weed that should not be used.

The poison which tobacco contains is what pacifies the smoker, who thinks he is feeling fine. Due to your habit of using the tobacco, you think it is giving you a sort of pacification, just like other drugs which make a patient feel that his nerves are better from the use of them.