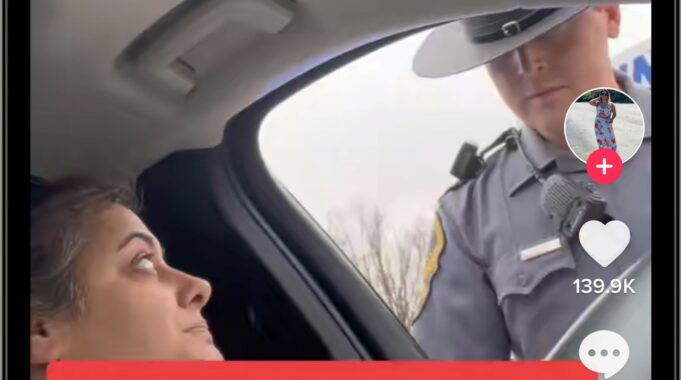 A viral TikTok video has exposed one of the most racist widespread American police policies. A Chesterfield, Virginia, woman named Charlotte Carter made a video and posted it on her TikTok site (@vapersianprincess) as a local cop pulled her over for an unknown offense. During the traffic stop by the trooper—identified as “Mr. Scott,”—Carter flips the well-known script and reads the cop his rights:

“Mr. Scott, you pull over 80 percent Black people. I went through all of your tickets for six months … only 20 percent of the population of Chesterfield [County] is Black,” Carter tells the officer standing next to her window. “I don’t know how you managed to ticket 80 percent minorities.”

Carter accuses Officer Scott of being “gung-ho” in his commitment to targeting non-White people. “The last six months, you had ticketed … you had ticketed 250 people in Chesterfield that had gone to Chesterfield court,” she says in the clip, adding that she compared Scott to another officer who had allegedly only ticketed 240 people in an entire year. “But you, I only had to go back six months. You sure do write a lot of tickets,” Carter laughs as she hands back the signed ticket to the officer.

The Daily Beast reported that Chesterfield County Police Chief Jeffrey Katz is also the president of the Virginia Association of Chiefs of Police, and he claimed that racial profiling was “not a factor” in the department’s traffic stops. Before moving to Chesterfield, Katz was the chief of police in Boynton Beach, Florida. In 2017, four Boynton Beach officers were federally charged for beating an unarmed Black man named Byron L. Harris, The Miami Times reported, spurring allegations of racism within the force that led local leaders to call for Katz’s termination.

The Chesterfield, Virginia, incident filmed by Ms. Carter helps pull the cover off a racist police policy that was exposed in the book “How White Folks God So Rich.”.  As we will see, the officer ticketing Carter may have been wearing a  police uniform, but his real function is that of a Black Tax Collector.

The policing of Black America is a function that has direct roots in plantation slavery. The task of hunting down and terrorizing enslaved Blacks and stripping them of any money they had fell to the newest European immigrants, primarily the Irish. Even today, the ceremonies and funerals of both the military and police forces across America include an Irish bagpipe band, testifying to a role that was once exclusively theirs.

White America’s ultimate goal was purely economic—keeping enslaved Blacks on the cotton plantations and then forcing them back onto the plantations after “emancipation.” White police officials were assisted in this critical civic responsibility by the many terrorist groups that formed under the banner of the Ku Klux Klan.

Douglas Blackmon’s book “Slavery by Another Name,”  exposed how after slavery law-abiding Blacks were criminalized via police sweeps designed to gather enough laborers to build the roads and bridges and other public works projects—never to “keep America safe from crime.” And that has been the objective of the “American justice system” ever since.

Today, the U.S. police routinely travel to Israel to learn methods of brutality and repression from the Israel Defense Forces (IDF), which, through the use of excessive or deadly force, oppressively control the Palestinian residents of Gaza and the West Bank. They also are trained in paramilitary tactics and combat techniques like the Israeli-concocted “martial art” of krav maga.

Blacks are tolerated in the cities and to a lesser extent in the suburbs because they, along with the Latinos, are the blue-collar labor force that turns on the city early every morning, flips the burgers, bags the groceries, carts the people and the products in and out, delivers the mail, washes and replaces the hotel bed sheets, mammies the little White babies, and then mops up after Whites in the evening. But they must, absolutely must, return to their designated geographic confines in the city shadows at the end of every White business day. They even had a name for those areas from which Blacks had to flee daily—Sundown Towns.

Every year, there are around 6,000 incidents of “police misconduct” and 400 deaths committed as police officers carry out their race-containment mission. Thus, the role of police is to monitor and contain the Black population and to protect the White merchants and service providers as they profitably siphon the Black retail dollar out of the ghetto for the growth and development of their own White communities. This is also why a police SWAT team will unhesitatingly hunt down a Black candy thief to the far corners of the slums, but feign powerlessness to arrest short-weighing butchers, expired food-selling grocers, over-pricing pharmacies, poison-selling liquor and tobacco merchants, and predatory mortgage-lending brokers.

This brings us to the recent traffic stop of Chesterfield, Virginia, TikTok racial justice warrior Charlotte Carter. Much of the rise in violent confrontations between police and Blacks may be attributed to the police being used as “tax collectors” rather than as “protectors of the peace.” Federal investigations found that local governments facing dwindling revenues have forced police into writing out more tickets to Blacks for minor “violations,” forcing them to pay fines and fees to shore up city budgets. Black drivers are 31 percent more likely to be pulled over than White drivers, and for Latinos, it’s 23 percent more likely.

An analysis of 620,000 traffic stops revealed widespread racial profiling, particularly during daylight hours when the race of the driver was more visible. The feds found that in St. Louis, Missouri,  (among many other places), the city receives 40 percent or more of their revenues from police writing traffic tickets. So the police, like a schoolyard bully, drive through Black neighborhoods targeting whom they can “legally” shakedown and fleece, often leading to aggressive confrontations and deadly force.

In 2014, New York police set upon 43-year-old Black man Eric Garner, seeking to collect a cigarette tax, and, when unsuccessful, they choked him to death. In Ferguson, Missouri, Michael Brown became the target of a White “tax collector,” who killed him in cold blood. The U.S. Justice Department found that Ferguson had raised $2.6 million in fines and asset confiscation. Down the road in St. Louis special days are set aside for Blacks to pay those wicked fines and, invariably, the line at the courthouse stretches around the block (see photo).

The systematic, government-sanctioned violence by police is designed to forcibly extract from Blacks the revenue needed not only to maintain a mode of life to which Whites are accustomed but also to keep Blacks submissively cooperative and readily exploitable for an orderly whiteward flow of the Black consumer’s green dollars.

This is America as it always was and it took—not the Department of Justice, not the FBI, not the governors, senators, or congresspersons, not the NAACP, Urban League or Black Lives Matter, but a TikTok video-maker, a woman of substance named Charlotte Carter from Chesterfield, Virginia, to expose it to the world.

Tingba Muhammad is a citizen of the Nation of Islam. Visit the NOI Research Group online at www.noirg.org.