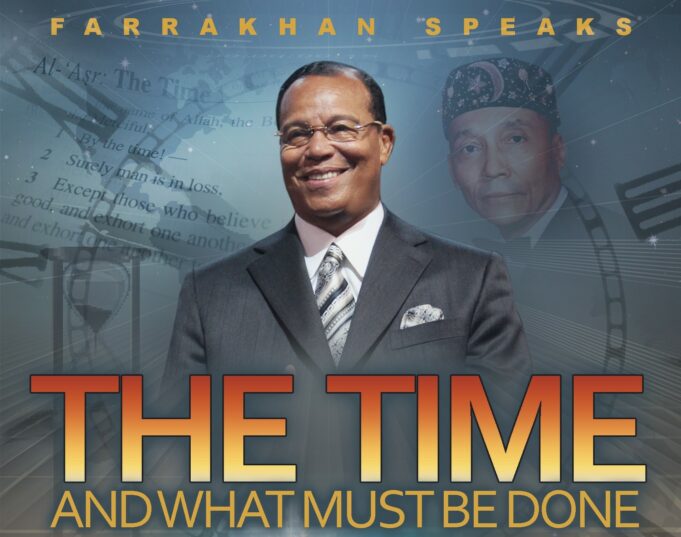 [Editor’s Note: This week we are presenting part of a message by Student Minister Ishmael R. Muhammad, National Assistant to the Honorable Minister Louis Farrakhan. Below are edited remarks delivered by Student Minister Ishmael Muhammad from his message delivered Sunday, December 11, 2022 titled: “Taming the Tongue: Those Who Guard Their Lips To Preserve Their Lives.” To view this message in its entirety, visit media.noi.org.]

In the Name of Allah, the Beneficent, the Merciful

Jesus rode into Jerusalem right? The people said, “hallelujah, this is he, son of David.” And at first in Jesus’s preaching, the Jews that hated him feared the people. But something happened because the multitudes that Jesus spoke to, they (the Jews) had evidently influenced the people in such a way that they (the Jews) could carry out their master plan to crucify him, which was public. And the people were silent. They knew he was a good man, knew of his good works that the enemy stoned.

And he (Jesus) had to say, “For which one of my works do you stone me for?” But they were able to carry out their plan with the people watching. And the people were silent when they crucified our Lord. I hope we can change that because they’re coming for the Honorable Minister Louis Farrakhan. He is the one man that they fear.

Those that say they are Jews, when Abraham Foxman was head of the Anti-Defamation League (ADL) and he went to the United States Justice Department with other Jewish leaders and they were talking about punishment for anti-Semitism. See, they have set it up so that when that label is put on any individual, it becomes a punishable criminal offense. They have their apparatus in the government.

I want to close with this: The Honorable Minister Louis Farrakhan has pointed out to us that the First Amendment of the United States Constitution reads that Congress shall make no laws respecting an establishment of religion or prohibiting the free exercise thereof, or abridging the Freedom of Speech, or of the press, or the right of the people peaceably to assemble and to petition the government for redress of grievances.

“How does one go from engaging in ‘free speech’ that we assume is protected by The First Amendment of The Constitution, to finding one’s self facing possibly criminal penalties?

How does such a wicked claim of ‘anti-Semitism’ move the accused one from speaking or writing the truth, and then to ‘legal jeopardy’?

“What is a legal mechanism by which these ‘attack dogs’ of The Synagogue of Satan activate ‘the governmental apparatus’ to seek out, punish and destroy those that are labeled as an ‘anti-Semite’ or as a ‘hate group’—and destroy their right to ‘free speech’ in the process?”

Now you can be vile and vulgar. On social media, they don’t mind any implicit, vile thing. But when truth is spoken, then they shut you down. They take you off of Facebook, take you off of YouTube, but it’s truth! But you can act the fool, you can be a purveyor of filth, you can talk about your brother, talk about your sister, and even incite violence. But all of that is fine.

But when it comes to truth, that’s when you know, Satan, see? Shut them down. So, there’s a criminal effect of being labeled anti-Semitic.  The Anti-Defamation League and the Southern Poverty Law Center, these are two agencies of the Synagogue of Satan that have campaigned over a protracted period of time—nearly 40 years—falsely charging the Honorable Minister Louis Farrakhan as an anti-Semite.

You don’t even know what the hell they’re talking about. What does that have to do with me? But we’re to prove that they are the real anti-Semites. And they are really anti-Black, anti-Hispanic, anti-oppressed, anti-poor, and anti-humanity!

Look at this. See they work to affect their scheming with the disproportionate number of members of the Jewish community working as district attorneys, federal and state prosecutors and judges in the United States court system where these cases will ultimately be tried. When you read of the arrest of Jesus, it’s right your New Testament—it was the Sanhedrin, it was the high priests, the Sadducees, the Scribes, the Pharisees.

That’s what made up this council called the Sanhedrin. They organized the arrest of Jesus. They set up a kangaroo court. They exercised their influence with the Roman authorities and at their urging to Pontius Pilate— Pontius Pilate if you know the story, he flogged Jesus. He didn’t see that this man was guilty of any crime.

He said to them, “I find no basis for your charges.” But they pressed and they found a false charge that they advanced out of their laws. They tried to pin the false charge of sedition that would cause the Roman authorities to say, “He’s raising the people up to revolt and come against Caesar.” And then they came with the charge of blasphemy. Notice, Pontius Pilate washes his hand. And, your New Testament tells you at the urging of the Jews they said, “Crucify him.” They wanted no punishment for him. They wanted no prison for him. They wanted him dead. Real talk. See, it begins with someone.

The Minister said: “It begins with someone, anyone, who holds a “controversial view,” and speaks or writes about it in public. ‘Controversial’ means‘contrary to the popular version of the truth.’” Jesus was controversial. But, “instead of engaging in honest and open public dialogue and debate about the issue that the spokesperson raises, as is called for and encouraged by the United States Constitution, private interest groups start with ‘the labeling’: “He’s a hate teacher, with a hateful message.”  And then the group he belongs to:  If they don’t repudiate the spokesperson fast enough, they also get called ‘a hate group that promotes intolerance.’”

This is why they label us, the Nation of Islam— a hate group. With all of the truth that we give, you don’t go out here to go do harm to any human being. We’re not guilty of harming, not one Jewish member, Not one White person.

Look at what the minister said:

“They don’t have to ‘prove it,’ they just have to ‘say it over and over again’—and then ‘the drumbeats’ get amplified by their brethren who control the media.  And if that person does not apologize ‘quick enough’ after that, they start to pick away at his supporters.  And those who would defend that person:  If they are not strong enough to stand up to the slander, they begin to fall away and distance themselves; and some may even start repudiating and ‘apologizing for’ their former friend and ally.”

“Still, if he refuses to ‘bow down’:  They connect certain inflammatory terms that are intended to generate real hatred, and even retribution, against the person who is speaking these controversial points.  They start with: ‘He hates!’ ‘He’s intolerant!’ and that escalates to, ‘He’s threatening, and he incites hatred in others!’

And then the word ‘violence’ gets thrown in, and then ‘hate crimes’ are mentioned; and ultimately, you hear the words ‘domestic terrorism.’ This is all calculated to get the public to put so much pressure on that individual; that they, and their supporters, ‘relent,’ ‘apologize’ and ‘retreat.’”

Not the Nation of Islam! We stand on the Truth that Allah has given to the Honorable Elijah Muhammad and the Honorable Minister Louis Farrakhan! They may threaten you with poverty and we will be tested. But he who stands strong in that day and in that hour in which we live, if you seek to save your life, the scripture says you will lose it. You think by running, apologizing, distancing yourself, falling away, that you have saved your life? You’ll lose it.

They have a long history of lying on the Nation of Islam! They have a long history of falsely charging us with what we are not! Lying to the public using the apparatus of the media that every time the Honorable Minister Louis Farrakhan’s name is mentioned they have to say, “the anti-Semite.” These are real enemies! And the reason why they’re focus is on Minister Farrakhan is because they said, “Louis Farrakhan is the only African American leader.”

Have you considered my servant Job? Go ahead, do everything. Whatever you have, in your mind, do it. But don’t harm a hair on his body. The Nation of Islam and the Honorable Minister Louis Farrakhan are the only ones they don’t control. That’s a fact! Minister Farrakhan in the Nation of Islam is the last man standing!

And what is the crime? That we teach you the knowledge of self? Teach you how to be a righteous person coming out of the way of their world, their culture and their way of life? To live a life of self-love, self-dignity, and self-respect? What have we done? To make men to be men, that we are responsible; that we will accept the responsibility to be the protectors of our women and children, the builders of our community?

What have we done? To teach our women how to be dignified and self-respecting? That, we learn from Minister Louis Farrakhan, the immeasurable value and divinity of the woman.

Cleaning us up takes them out of business! The county jail has got to shut down because it’s full of us. Alcohol has to shut down. We won’t play the lotto anymore. Look how much money we spend on foolishness. Then we start redirecting those dollars that we spend foolishly and recklessly to build institutions for ourselves, build factories that we can employ our own people into, enter into international trade and commerce with nations all around the world!

That’s what freedom looks like!  Freedom isn’t that you have a place in their institutions, at their water fountain, in their hotels, working in their corporations—there’s nothing wrong with that. But remember, “Papa may have, mama may have, but God blesses the child who’s got his own.” Thank you for listening, as we greet you in peace. As-Salaam Alaikum!