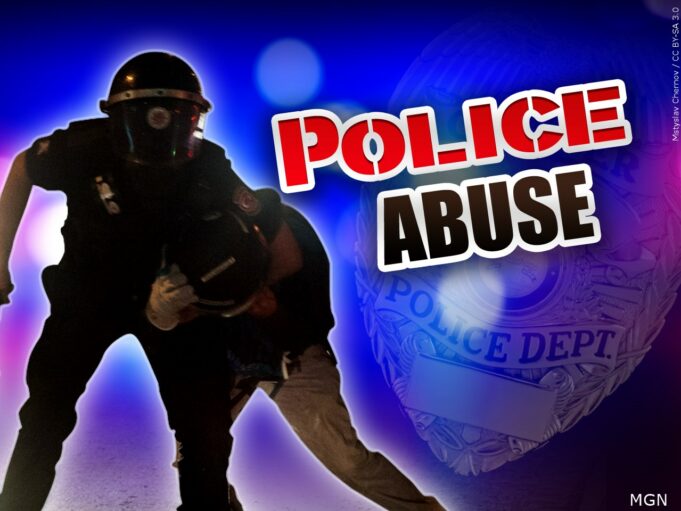 ‘The issue (police sexual abuse) is met with indifference and denial, pointed out Professor Tommy J. Curry, Ph.D., MPH, Personal Chair of Africana Philosophy in Black Male Studies at the University of Edinburgh, School of Philosophy, Psychology, and Language Sciences.’

The disturbing reality of law enforcement officers sexually abusing Black men is being pushed out further from the shadows. This terror perpetrated by cops has largely been swept under the rug or dismissed and the road to justice for the Black male victims is elusive.

Deandra Billingsley was sexually assaulted by police officers on July 31, 2019, in broad daylight in Memphis, Tenn., charged his attorney Jacob Brown. Memphis Police Department officers Christopher Tracy and Justin Vazeii, who was training him, jumped out of their patrol car and yelled at his client and a minor to put their hands on the hood of the patrol car. The officers proceeded to frisk them both, despite Mr. Billingsley’s objections to being detained without probable cause.

Ofc. Tracy handcuffed Mr. Billingsley’s hands behind his back and in full view, rubbed his buttocks and ultimately penetrated his anus in public with his finger. The cop ignored Mr. Billingsley’s demands to know why he was being detained. He began invasively searching Mr. Billingsley, noted documents provided to The Final Call by Atty. Brown.

In addition to the effects of the sexual assault, Mr. Billingsley has suffered from distorted memory, contends Attorney Brown. “We’ve consulted with two experts in what they call the ‘neurobiology of trauma,’” he told The Final Call in a phone interview. In more simple terms, the brain tries to suppress the memory which tends to distort what other parts of the brain victims will associate with that memory, he explained.

Atty. Brown filed a complaint on behalf of his client on August 5, 2020, a little more than one year after the incident. This is of note, because the statute of limitations in Tennessee for civil rights cases, even in federal court, is one year, he said.

In September 2021, the trial court granted that motion and dismissed the case, but a federal appeals court ruled in his client’s favor in September 2022 and sent the case back. Currently, they are waiting for the defendants to respond to the written questions to discover relevant facts in the case, said Atty. Brown.

The city should not be able to take advantage of its own wrong, argued Atty. Brown.

The alleged incident happened in Binghampton, less than a mile away from where Atty. Brown lives with his wife and son, in a relatively nice part of town. Unfortunately, in Memphis, that’s still largely synonymous with White, he said.

“But I know that police officers in the East End neighborhood, which is where our condo is, would never dream of just pulling up on the street and demanding that two men standing on the street talking to each other, submit to a search. That would not happen. But it happens all the time, less than a mile away, in a different neighborhood,” stated Atty. Brown.

The real problem is what they did to Mr. Billingsley, but also the culture within the police department where these officers didn’t hesitate to do something so egregiously invasive, he argued. They felt like they could do what they did with impunity and in fact talked and joked about it on the body cam afterward, which speaks to a deep problem within the department, stated Atty. Brown.

Abdul Shahid Muhammad, a sergeant with the Memphis Police Department, was not at liberty to speak about the case but he said most law enforcement agencies are clear on the policy regarding cavity searches and that they are not authorized. “The officer is not authorized on the scene to do a cavity search,” he stated. Most require a warrant and more than likely because there is no warrant most officers will let the person go, he explained.

Even with a warrant, a cavity search must be performed by a medical professional, barring some pressing circumstance, such as if an officer saw the person conceal something in a cavity that was potentially dangerous to themself, said Sgt. Muhammad, a veteran officer who has worked cases on sex crimes/juvenile abuse for 22 years.

“I’ve been doing this job a long time since the working in the jail … worked with the narcotics unit … worked in organized crime unit for about four years, where you’re dealing with drugs and people concealing things and swallowing crack and all of this kind of stuff. And I’ve never been in a situation whereby I felt the need to do a cavity searching. So, it’s just strange to me,” stated Sgt. Muhammad.

What happened to Mr. Billingsley should not be met with a dismissive attitude, argue observers.

Black men are not only denied being perceived as victims and had been denied ownership of their bodies dating back to slavery, but Black men also lack access to resources and support following their assault, noted the 2021 University of South Carolina research journal, “Predator or Prey: The Analysis of Gender and Race on the Perception of Black Men as Sexual Assault Victims.”

“Sexual violence against Black men and boys has remained a routine, and historically denied, aspect of anti-Black racism. … Despite the violence that defines their lives under racism, their stories and these public displays of racism’s sexual components remain an unapproachable area of study under our current disciplinary arrangement of knowledge—specifically, the gender category itself,” the report noted.

The issue is met with indifference and denial, pointed out Professor Tommy J. Curry, Ph.D., MPH, Personal Chair of Africana Philosophy in  Black Male Studies at the University of Edinburgh, School of Philosophy, Psychology, and Language Sciences.

The solution requires Black organizations to expose the denial many Black political organizations and leaders have concerning Black male sexual victimization; he told The Final Call in writing. But how big is the problem? There are no official numbers of police officers’ sexual assault of Black men and boys in the U.S., he said. But however, Centers for Disease Control data indicates that Black males over the age of 18 report some of the highest numbers of sexual victimization in the country, according to Dr. Curry.

“Some of these accounts are undoubtedly involving police encounters. We have testimonies of survivors going back to the rape and sodomization of Abner Louima in 1997 to the current accounts of Black males being sexually assaulted by police officers in Milwaukee, Memphis, Baton Rouge and of course New York,” he stated. In 2001, the city of New York settled the case  in which Haitian immigrant  Abner Louima was assaulted with a plunger by officers in a precinct bathroom for $8.7 million.

In January 2016, the Milwaukee Common Council approved a $5 million settlement with 74 Black residents, who said they were subjected to illegal strip searches and body cavity searches by police officers looking for drugs, according to the Journal Sentinel.

A federal jury awarded Willie Newman nearly $2 million in November 2016 in a case involving an illegal strip search. The allegations were that it was done intentionally, maliciously and willfully, according to a local Milwaukee Fox 6 online news report.

Four Milwaukee police officers were fired and charged as a result of illegal strip searches. In 2013, Ofc. Michael Vagnini, who approached Mr. Newman with others, was convicted of felony charges, the Fox 6 report continued.

Dr. Curry recommended solutions, which include bringing attention to the ways that police violence and racial profiling utilize sexual assault as a way to intimidate and dehumanize Black men and boys. He urges opinion-makers and policymakers to incorporate sexual violence against Black males as part of their understanding of police violence, and, allocate public health resources and mental health resources to counselors trained to deal with the trauma created by sexual assault by police officers, he continued.

“The sexual assault and rape of Black men and boys by police is a pervasive problem in the United States. What we have seen with the sexual assault of Black men and boys by the Milwaukee PD is not merely the repetition of racist sexual practices against Black males that are designed to dehumanize and emasculate them, but the effect of anti-Black misandry where American society at large refuse to recognize the sexual violence imposed on Black males by police,” stated Dr. Curry.

“The forced nudity, fondling of Black male genitalia, and sodomization of Black men and boys publicly by police officers not only demonstrate the vulnerability the Black male body has to sexual violence, but the indifference Black activists and liberal allies have to the dehumanization of Black males more generally,” he said.

Abuses such as these are just one of the many reasons why Black people must separate from an enemy that seeks to destroy them. Black people continue to cry out for justice, but what does justice look like?

“The Honorable Elijah Muhammad said: ‘Justice is a principle of fair dealing; justice is the law that distinguishes between right and wrong.’ But he also said, ‘Justice is a weapon that God will use in the Day of Judgment.’ He said, ‘If justice were in the world there would not need to be a Judgment,’” the Honorable Minister Louis Farrakhan stated during a 2015 interview leading up to “Justice or Else,” the 20th anniversary commemoration of the Million Man March.

The Minister continued, “But since the world is run by a satanic mind, and justice is not the order of the day, justice is denied. Dr. Martin Luther King, Jr., said ‘the arc of the universe bends toward justice.’ So even if I can’t get justice in the courts of America, which are run by White supremacists, that is not The Court that ultimately has justice in its grip.”

During the same interview, Minister Farrakhan spoke on the former president, founding father and slave owner, Thomas Jefferson who stated “I tremble for my country when I reflect that God is just, and His justice cannot sleep forever.” If the courts don’t do their job, the law of justice contained in the universe will do that job and No man or woman can escape the consequences of their actions, the Minister continued.

“And the sad thing is, when Thomas Jefferson said he ‘trembles’:  He was, in present time, trembling for his people in a future time! Nobody escapes. So, the children of Jefferson today, that have lived deliciously based upon what he did, and the evil of what he did and the justice that he didn’t do: He knew one day they would have to pay.  And I am here to warn America:  This is that time, and you will pay: ‘Justice…Or Else!’  And since you didn’t do Justice, the ‘or else’ is now present in America and in the world.  This world’s time is up!” said Minister Farrakhan. Final Call staff contributed to this report.