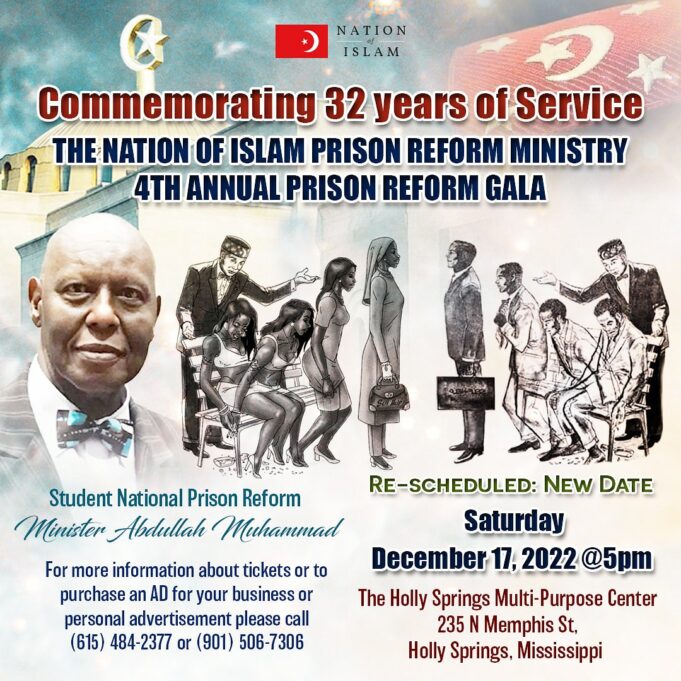 “The desire is, in words, to give him his flowers while he lives. He’s been a stalwart. He’s been a mainstay in our great Nation of Islam and in that ministry. He’s labored hard. So, we really wanted to show our brother some appreciation and just a little love,” said Student Minister Abdul Shahid Muhammad of Holly Springs, Mississippi, to The Final Call. He has served in the Prison Reform Ministry since 1994.

The gala will take place at the Holly Springs Multi-Purpose Center on Saturday, December 17 at 5:00 p.m. and is being spearheaded by Muhammad Mosque No. 60 out of Nashville, Tennessee. Brother Kenneth Muhammad, a student in the Prison Reform Ministry, from Holly Springs, is the driving force behind the event.

“We’re going to have the royal carpet down, we’re going to have fine cuisine, some of the finest Muslim cuisine that you can ever taste. You’re going to also be able to hear some stories, see some individuals and celebrate those who went to prison, heard the Teachings and came out and are now productive members of this society,” he added.

The Most Honorable Elijah Muhammad listed in Point Number 5 of What the Muslims Want published on the back page of The Final Call: “We want freedom for all Believers of Islam now held in federal prisons. We want freedom for all Black men and women now under death sentence in innumerable prisons in the North as well as the South.”

Student Min. Abdul Shahid Muhammad stated that the Prison Reform Ministry serves as a safety net for Black men and women who may get caught up in the system due to circumstance and the lack of opportunities.

“Circumstances got them into a situation or whatever the case may have been, but when you look beyond the number, the prison outfit they’re wearing, the fact that they’re incarcerated, and when you get an opportunity to sit and talk and share the teachings of self-improvement with them, you see a totally different person under all of the hard shell that the world causes us particularly as men,” he said. “We put on this facade just to protect ourselves for the most part, but once you get beyond it, the mask if you will, you see the humanity of these brothers and not only that, you see the brilliance, the potential.”

Brother Kenneth Muhammad is a product of the Nation’s Prison Reform Ministry. He was sentenced to 15 years in 1993 and was released in 2018. He started listening to the Honorable Minister Louis Farrakhan while in prison.

“He said there is no human being that cannot be redeemed, and it was like he was talking directly to me. I internalized it. I began to study the words of the Most Honorable Elijah Muhammad under his direction,” he said.

He quoted the Honorable Minister Louis Farrakhan in saying that true prison reform starts with enlightenment.

“True prison reform reconnects the soul to its Creator and then begins to provide those human needs. Then you will see a change in attitude, which leads to a behavior change. So the prison reform, its primary aim and purpose is first to enlighten the inmate of who they are in reality, not what they become because of their circumstances. By nature they are of the righteous. They are of God,” Brother Kenneth Muhammad stated.