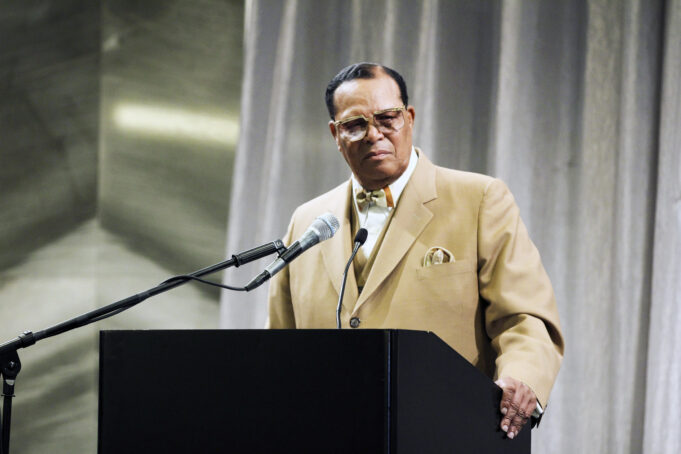 According to the Bible, there was a special fear that the Jewish religious leaders, known as the Pharisees, were plagued with. Their fear of Jesus can be best examined in the words of the following scripture.

“If we let Him go on like this, all the people will believe in Him, and the Romans will come and take over both our place and our nation.”—John 11:48

Compare what the Pharisees said of Jesus in John 11:48 to what some of the modern-day Jewish leaders say of the Honorable Minister Louis Farrakhan. The recent article in the Jerusalem Post on November 26, 2022, written by Jewish businessman Adam Milstein states the following:

“Farrakhan must be treated as a persona non grata in America. For too long, his poisonous presence and rhetoric have been tolerated. Politicians and celebrities that support or echo Farrakhan and his vile ideology must be held accountable. He and his NOI organs and acolytes must be denied the reach afforded by social media, where he boasts over 350,000 followers on Twitter. Otherwise, we’ll be dealing with the antisemitic and extremist fallout of many more Kanyes in the years to come.”

Jane Eisner, Adam Milstein, Abraham Foxman, Ben Sales, Abe Greenwald and Sheldon Kirshner are Jewish writers; each of whom writes in such a way to communicate that modern-day Jewish leaders view Minister Farrakhan in the same way the Jewish leaders in the Bible viewed Jesus. And they want the world to know that they want Minister Farrakhan and his students to be banished from the public view.

Milstein’s words are very serious to me as a Black man and as a student of the Honorable Minister Louis Farrakhan. Milstein’s call for the isolation and censorship of our beloved Minister is the “dog whistle” call for the assassination of Minister Farrakhan!

But Allah (God) is present to protect the life of the Honorable Minister Louis Farrakhan. And I am one of many who are willing to defend our beloved Minister—Allah’s anointed servant—against the wicked pen of Milstein and his ilk!

It was in the Wall Street Journal November 10, 2022, that the infamous and nefarious former head of the Anti-Defamation League of B’Nai B’rith (ADL), Abraham Foxman hobbled forth to identify Minister Farrakhan as the root for the controversial views expressed publicly by Kyrie Irving and Ye (formerly known as Kanye West).

Foxman cried that Kyrie and Ye had absorbed critical views of Jewish misconduct in the Black community from the message of the Honorable Minister Louis Farrakhan. And he, like Milstein, makes an appeal for an attack on our beloved Minister, when he states:

“The time has come for civil-rights leadership, black and white, to exorcise this anti-Semitism from civil discourse. We no longer have the option to ignore it.”

Foxman and Milstein are joined also by Abe Greenwald, executive editor of Commentary Magazine, who also seeks to blame the Hon. Min. Louis Farrakhan for statements made by Ye. Greenwald in his criticism of Ye for the Wall Street Journal’s November 3, 2022 edition scribbles:

“That sort of talk sounds very much like the ravings of Nation of Islam leader Louis Farrakhan, the world’s foremost black anti-Semite. ‘You can’t do nothing in Hollywood unless you go by them’—the Jews—Mr. Farrakhan said in a 2010 speech. ‘You a hip-hop artist? You can’t do nothing, you gotta go by them. You want to be a great sports figure? They own that plantation. Children of Israel, they got you jumping through hoops.’”

Greenwald’s poison pen takes a very inflammatory tone as he seeks not only to attach the statements made by Ye with Minister Farrakhan, but he also seeks to attach the noble name and person of our beloved Minister to crimes committed against Jewish victims. This is Greenwald’s way of saying what was not long ago discovered in a J. Edgar Hoover memo regarding Minister Malcolm X; right before his assassination. Hoover wrote angrily in an FBI internal Memo: “Do something about Malcolm X!” Not long after that, Minister Malcolm was assassinated!

The same FBI, led by J. Edgar Hoover, formed an alliance with the ADL. And as such, the ADL served as a co- conspirator in Hoover’s infamous counter-intelligence program that target Black leaders and organizations for destruction. A January 17, 1968, memo from the office of J. Edgar Hoover instructed all FBI regional offices to work with and cooperate with the Anti-Defamation League of B’nai B’rith. It states:

“The Anti-Defamation League, 315 Lexington Avenue, New York City, maintains regional offices throughout the United States. As you know, this organization like the Bureau, is opposed to groups and individuals espousing bigotry, prejudice and extremism. It seeks to bring the true facts concerning such groups and individuals to light.

In the furtherance of these worthy objectives, the Anti-Defamation League receives considerable information of interest to this Bureau and has been very cooperative in the past in referring such data to us. You are to immediately make certain that you have established liaison with the head of the Anti-Defamation League regional offices in your territory and explain the jurisdiction and interests of this Bureau.”

Greenwald’s false association of the peaceful, yet powerful Minister Farrakhan conflicts extraordinarily with Jewish Rabbi Bruce Kahn who rebuffed critics of Min. Farrakhan after he, as a Jewish Rabbi and critic of the Minister, attended the Million Man March. According to Rabbi Kahn:

“It seems clear to me that despite what I consider to be the horrifying insults that have issued from the Minister, the people who listen to him do not go chasing down Jews, or gays or Whites or Koreans to beat them and murder them. They do not do that for two reasons:

“First, he warns them against such violent behavior. Second, these verbal onslaughts do not constitute the main thrust of his message. As unacceptable as they are, they are also tangential. His listeners know that. They are sufferers who know how tough it is to get a fair shake as Black people. They want that to change. They hear in Minister Farrakhan’s words inspiration and instructions to begin to bring about that change. That is the message on which he focuses and on which they focus. That is not the message on which the media focuses.”

According to the New Testament, the Pharisees not only were afraid of Jesus but they were upset over the love showed to him by the people. And at a certain point they even desired that his disciples be censored:

“And some of the Pharisees called to Him from the crowd, ‘Teacher, rebuke Your disciples. ‘But He answered and said to them, ‘I tell you that if these should keep silent, the rocks would immediately cry out.’”—Luke 19:40

I think it is profound that Jesus takes the position that he takes as a response to the Pharisees plea that he silences his disciples. He says, essentially, that as the servant of God, He is so on time and so in tune with God, that the rocks and stones (i.e. the elements of nature) would rise to aid Him in the delivery of his message.

From my vantage point, this explains why seemingly so many high profile, celebrity type folk are creating what the Jewish leaders dread of a “Farrakhan Echo” that is causing the Minister’s message to escape the blockade of censorship that has been designed to suppress it. It is like when Jesus speaks of the rocks crying out to aid him, Allah (God) has provided for Minister Farrakhan, as a modern-day Jesus, “rock stars”—men and women of celebrity status-who are in their own way expressing the message of our beloved Minister.

The Most Honorable Elijah Muhammad wrote on April 13, 1973 in the Muhammad Speaks Newspaper the following important statement:

“Their ultimate aim is to do as their people have done—try to destroy the preacher of truth and those who believe and follow him.”

In what has been written recently by leading writers for Jewish publications, we see various expressions of what the Most Honorable Elijah Muhammad has stated as their ultimate aim. They want to destroy our beloved Minister, the Honorable Minister Louis Farrakhan. Upon closer examination of the Jewish reaction to Minister Farrakhan, it is no wonder that they falsely label him as anti-Semite, despite the Minister’s sterling record of peace and goodwill.

Closer examination reveals that it is Minister Farrakhan’s surprising similitude and fondness for the man called Jesus that is at the root of their hatred of him. Consider, how there is so much in the news nowadays about “anti-Semitism.” Yet no one ever talks about where did anti-Semitism come from? What is considered to be the origin of it?

“The gospel story, which has generated more anti-Semitism than the sum of all the other anti-Semitic writings ever written, created the climate in Christian Europe that led to the Holocaust. Long before the rise of Adolf Hitler, the gospel story about the life and death of Jesus had poisoned the bloodstream of European civilization.”

This is a bombshell revelation, that exposes the corrupt foundation of the phenomenon of labeling someone an anti-Semite. For if the Gospel of Jesus is deemed the origin of anti-Semitism, then how can any Christian in such a dominant Christian society avoid at some point or another being falsely labeled an anti-Semite? And all they would have been guilty of is following the word and way of Jesus.

“During his tenure and prior to the murder of Malcolm X, Director Hoover often spoke of the need for preventing the rise in this country of what he called ‘a Black Messiah.’” Today, Minister Farrakhan, in my opinion, would be so considered, placing him in great jeopardy.

I urge the Black community and those of other communities who love truth and righteousness to join us as we close ranks around the Honorable Minister Louis Farrakhan! J. Edgar Hoover targeted our great leaders of the past for assassination, and he was helped by the ADL. Today, we have Minister Farrakhan, and the ADL is pursuing his life. I declare that we—as a people—shall no longer stand by as spectators while our leaders are attacked!