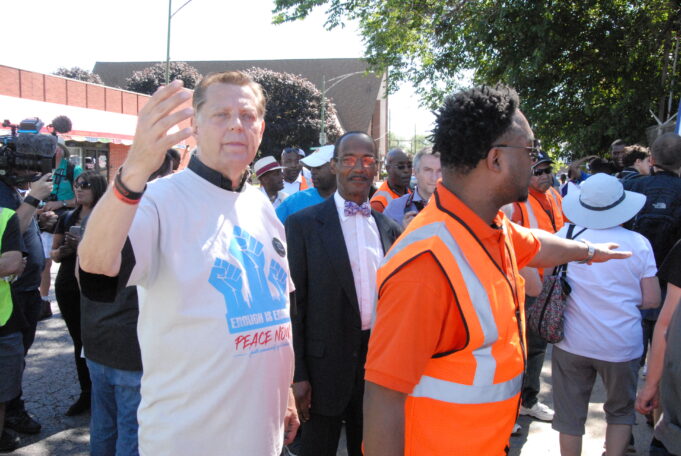 CHICAGO—“We believe and know Father Pfleger to be a man of integrity and a warrior for justice,” said Attorney Andrew M. Stroth, who is representing Walter Whitman, choir director of the Soul Children of Chicago.

Atty. Stroth held a press conference in mid-November at the Archdiocese Pastoral Center located at 835 North Rush Street in light of the recent allegation of sexual abuse against Father Michael Pfleger that surfaced in October. According to blockclubchicago.org, the attorney representing the accuser said his client is a man in his 40s. He alleged Father Pfleger abused him on two separate occasions in the 1980s when the man was a member of the Soul Children of Chicago, which regularly rehearsed at St. Sabina, reported blockclubchicago.org.

Mr. Whitman told Atty. Stroth that he is hurt by the allegation against the longtime activist priest and does not believe it is true, the outlet noted.

Flanked by supporters of the longtime Chicago pastor and advocate for Black, Brown and poor communities, Atty. Stroth demanded that the Archdiocese Review Board decide on Father Pfleger’s case. The board met on November 19 in a meeting not open to the public and concluded that a decision could not be reached. The board plans to meet again on December 10.

Atty. Stroth argues that after St. Sabina conducted its own investigation, “zero objective evidence” was found of any wrongdoing on Father Pfleger’s part. “We provided the Archdiocese with sworn affidavits from several members of the Soul Children [of Chicago choir] testifying providing statements that they saw, heard or were aware of any allegations and they know the alleged victim,” he told The Final Call.
Atty. Stroth also said that the Archdiocese has enough evidence to decide whether or not Father Pfleger should remain excused from the ministry.

Father Pfleger declared his innocence quickly after the allegation surfaced. He also released a second statement addressing the Archdiocese’s review of the case.

“While this is disappointing, painful, and to be honest, brings feelings of anger, our faith reminds us that God’s promises may be delayed but it will not be denied,” he wrote in a statement published on Facebook, on November 22. “I am confident that I will be found innocent on the 10th and will be restored to ministry. Please know I miss my Saint Sabina Family terribly.”
His supporters flooded his post with prayers and encouragement.

The Saint Sabina Church urges supporters to send a letter to the Office for Child Abuse Investigation and Review asking for a quick turnaround of the Archdiocese’s investigation.