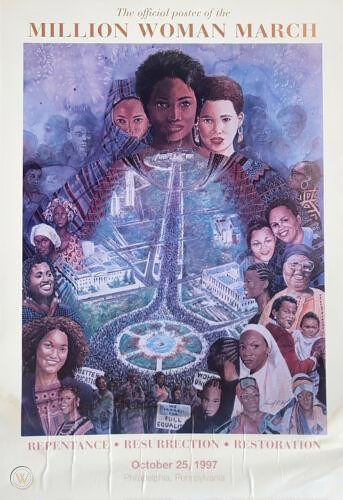 PHILADELPHIA—October 25, 1997 was a historic moment for Black women in America. On that day, organizers estimated more than two million people gathered on the Benjamin Franklin Parkway in Philadelphia, Pennsylvania, to participate in the Million Woman March. The march served as a powerful display of unity and sisterhood. Twenty-five years later, the Million Woman March remains a vital part of American history, and its legacy inspires women worldwide.

The Million Woman March was a turning point for the global women’s movement. For the first time, women of African descent throughout the diaspora came together to demand justice and equality. The march was organized using an unconventional grassroots approach. Fliers, Black-run media, and a network of women’s organizations spread information about the march, resulting in a massive turnout. The success of the Million Woman March demonstrated the power of grassroots organizing, inspiring other mass gatherings and making it a social phenomenon.

The Million Woman March was founded by Philadelphia-based human-rights activist Sister Empress Philé Chionesu. The goal of this peaceful demonstration was to empower Black women to improve their families and communities by working together.

“It’s always been about self-determination,” she told The Final Call.

In celebrating the 25th anniversary, Empress Philé shared that on October 25 of this year: “We had a meet and greet, both virtually and in the ’hood, so those that attended the march or supported the march in ’97 had the opportunity to reconnect, recommit and reignite.”

“We held a virtual press conference and a physical one later that evening,” she said. “And I officially announced the Million Woman World March, which will take place in 2023, ending our yearlong Million Woman March 25 reunion.”

“This is the first ‘Global Movement for Women and Girls of African Descent’ and it will implement ‘The BlacXPrint Agenda 25 Direct Action Program.’ In addition to connecting women of African descent worldwide, the Million Woman World March will provide opportunities for uplifting women in education, health, and politics,” she said.

Further discussing the details of the Million Woman World March, Empress Philé said five nations would participate. She further stated her organization had been working tirelessly to expand its international scope.

A significant part of the Million Woman World March will be a presentation of reports from countries she states will be participating.

In the past five years, Empress  Philé said she’s been working with organizers in other cities to make plans for women entrepreneurs. Over the years, she developed seven sister cities that form this network, including Detroit, Chicago, Newark, Baltimore, Memphis and Washington, D.C.  Next year, New Orleans will be added.

“What we did in those sister cities was to establish either affiliate chapters or other kinds of ally relationships. So, for each one of those cities, we have special projects we’re going to be implementing,” she said.

“The need for self-awareness is more urgent than ever. Our sisters must learn about themselves, and that’s why we’re now ready to go worldwide—knowing they are the mothers of civilization (and one of our themes). This way, no matter what tribe or religion you come from—that’s what we’re ready to tap into.  Ultimately, that will be what we will do to assist and raise our women from the current state of mind they are in wanting to be like some other women to such a degree that their own identity is not only misrepresented but it is being ignored, disrespected, and, well, destructive,” Empress Philé said.

During the 1997 March, a number of prayers were offered, songs were sung, inspiring speeches were given, and other activities were held. The keynote speaker, Winnie Mandela, was one of many notable speakers, including U.S. Rep. Maxine Waters of California, Jada Pinkett Smith, rapper and author Sista Souljah, and two of Malcolm X’s daughters, Attallah and Ilyasah Shabazz.

Asia Coney, who currently serves on the Board of the Philadelphia Housing Commission, played an integral part in the organization and success of the march. Although she is no longer active with the original organization, she supports them.

“The march was electric,” she said. “Something about being in the presence of so many like-minded individuals was invigorating. Being able to share in the experience with my sisters created a bond that still exists today.”

“The march was more than a moment—it was a movement. It inspired many of us to go back to our cities, establish community organizations, and pursue our educations,” she said.

“Despite the challenges, Black women continue to be life-givers and are essential in our society. We must uplift Black women and appreciate their strength and resilience. We must work together to create a better future for all of us; for me, that is the legacy of the Million Woman March,” she added. For more information, contact [email protected]