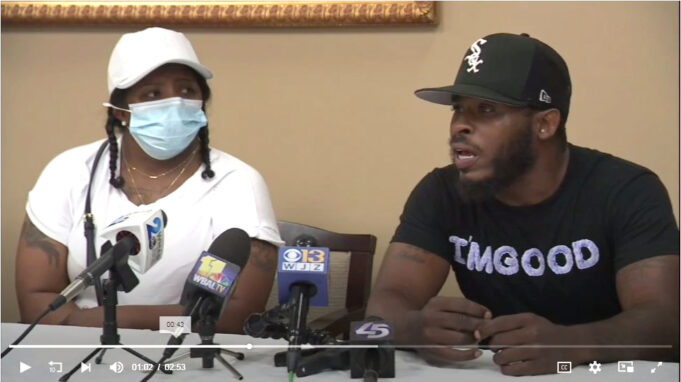 Tavon Scott was 14 when he allegedly shot and killed 48-year-old Timothy Reynolds. A Baltimore judge recently ruled that Tavon, now 15 years old, will be tried as an adult. Tavon was originally indicted on a charge of first-degree murder. That means the first-degree murder charge stands, according to local reports. The judge rejected the State’s Attorney for Baltimore City, Marilyn Mosby’s recommendation that Tavon plead guilty to manslaughter and his case sent to juvenile court.

“Today’s decision by the court could not have been an easy one to make, but it was done in the interest of justice and fairness,” Atty. Mosby said in a statement. “As I’ve stated before, there are no winners in this case. A man has lost his life and a child will have to face consequences because of his inexcusable and reckless actions.” The judge made the ruling on Nov. 17.

The Tavon Scott case has been controversial from the beginning. Tavon is Black and Mr. Reynolds is White. Last summer, Mr. Reynolds was driving in downtown Baltimore and had words with a group of boys in the street who were washing windows at red lights. Mr. Reynolds, according to the police report, pulled over, retrieved a metal baseball bat out of his car, and crossed eight lanes of traffic to confront the boys.

“This is about an unprovoked attack upon children who engaged in ostensibly lawful conduct by a man who was 6’3”, 329 pounds,” J. Wyndal Gordon, Tavon’s lawyer, said at a news conference. “He said that he was going to kill these children. He said, ‘I’m going to kill your f *** a****… What we saw in the video was the man swinging his bat. What we saw from the information that we received was that the man made contact with at least a child, struck him twice, and he was shot in return.”

Warren Brown, Tavon’s other lawyer, explained, “It’s a sad situation for everybody. This young man is 5 foot 6, my height, and 126 pounds. He’s a small child; he was 14 at the time. The deceased was over 6 feet and over 200 pounds wielding a bat … that’s quite frightening and quite menacing.”

“This young kid has no history with the system, he hasn’t been detained in any juvenile facilities. He was in school. He was not a troublemaker,” he said. Atty. Brown said the teen “was just out there trying to make some money, honest money” and would go between several streets. “On a good day, he made $200, on a bad day he made $90.”

The original Baltimore City prosecutor for the case was recently removed because she was accused of leaking information to the victim’s family. The Reynolds family attorney, Thiru Vignarajah, also held a news conference where he showed documents many think could only have come from the prosecutor.

The Reynolds family was against the plea deal from the start. They wanted Tavon tried in adult court. “The victims are as entitled to the facts and evidence as the defense team is. It is the height of hypocrisy for defense attorneys who have peddled a fictionalized account of what happened to now complain that the truth is coming out,” Mr. Vignarajah said at the news conference.

Andrew Muhammad, founder and CEO of Baltimore Brothers, works with the Squeegee Boys, who set up daily at street corners around the city to clean windshields at red lights in exchange for donations. He told The Final Call, “My organization has been working with the Squeegee Boys for maybe three years. We help them get back in school, give them money to eat, jobs, find them clothes, feed their families, and help their parents out.”

He said, “We are hands on with them. Since the Tavon Scott case the city is concerned about providing services for these boys. They need help. They need people who care about them and want to help guide them.”

The concern for many onlookers is the growing problem of the adultification of Black youth. It’s happening around the country with Black children robbed of the opportunities to be children.

A 2014 report titled, “The Essence of Innocence: Consequences of Dehumanizing Black Children” defines adul­ti­fi­ca­tion as, “a form of dehu­man­iza­tion, rob­bing Black chil­dren of the very essence of what makes child­hood dis­tinct from all oth­er devel­op­men­tal peri­ods: inno­cence. Adul­ti­fi­ca­tion con­tributes to a false nar­ra­tive that Black youths’ trans­gres­sions are inten­tion­al and mali­cious, instead of the result of imma­ture deci­sion mak­ing—a key char­ac­ter­is­tic of childhood.”

Children in most societies are considered to be in a distinct group with characteristics such as innocence and the need for protection, explained Phillip Atiba Goff, Ph.D., of the University of California, Los Angeles, one of the authors of the study. “Our research found that Black boys can be seen as responsible for their actions at an age when White boys still benefit from the assumption that children are essentially innocent,” he wrote. The study was published by the American Psychological Association.

According to the Equal Justice Initiative, 13 states, including Delaware, Florida, Hawaii, Idaho, Maine, Michigan, and Pennsylvania, have not imposed a minimum age for prosecuting a child as an adult, leaving 8-, 9-, and 10-year-old children vulnerable to extreme punishment, trauma, and abuse within adult jails and prisons. Adult jails place them at increased risk of sexual, physical, and psychological abuse.

The California Supreme Court ruled in 2021 that 14 and 15 year-olds can no longer be tried as adults in court, which could result in a lifetime prison sentence. Sending a young person to adult court and possibly a sentence in an adult prison rejects the science that teens’ brains continue developing into their early 20s.

Dr. Khalillah Ali works with youth and families in Dallas, Texas. She told The Final Call, “During the late teen years and early 20s, youth are more or less in the last phase of brain development. The last areas to mature are the frontal areas.”

“These areas are used for executive functions like planning, inhibition, reasoning, and problem-solving. It’s like everything is ready, the brain parts are there, except the part that is supposed to keep it all in check. Today’s youth are faced with processed foods, too much sugar, unhealthy diets and mandated vaccines with neurotoxins that can affect their brain. Some people are made mentally handicapped.”

What happens when a child is sentenced as an adult and placed in an adult facility?

“I was 16 years old, maybe 125, or 135 pounds when I was placed in a segregated unit in an adult facility,” D.C. youth justice advocate Joel Caston told The Final Call. “I started doing pushups in vain. That was my way to try to build up some sort of physical strength to defend myself when I would be removed from that unit to general population,” he said.

“When I got to the adult unit, the men were screaming ‘look at this bull s*** they got little kids coming in here.’ The men felt a huge sense of disgrace or shame to see their younger counterparts, boys so young, in there with them. I thought I was an adult at 16. But once I got inside and they put me around the adults, I immediately recognized that I was simply a child. Everybody was two to three times my size.”

Not only were the men bigger than Mr. Caston, they had facial hair. He didn’t. They sounded more mature. He didn’t. He was confronted with being a teenager.

“Sometimes we grow up too fast and we think we are adults,” Mr. Caston said. “But when they charge you as an adult and put you around men, you realize that you are only a child. Once you are stripped of the artificial armor we wear in society, we see the reality. Smoking, drugs, drinking, all these things make us feel like an adult,” he added.

“Being charged as an adult is cruel. In adult prison, you know you are a child. You catch hell from other prisoners and the correctional officers. Only by the grace of God can somebody survive such a horrific attack constantly on your manhood in places like that.”

Edwin Avent, CEO of Baltimore Collegiate School for Boys, was in court when the judge denied the plea deal to move Tavon’s case to juvenile court.

“When the young man was first brought into court in shackles in chains, you know, and I’m looking at a little 15-year-old boy. He could be a student at my school easily,” he told the media.

“He (Tavon) said that part of him being on the corner with the other squeegee boys (boys who clean windows) was that was his community. …When they asked him do you have mentors, he said yeah some of the squeegee guys are his mentors, so a lot of these young men are looking to belong,” Mr. Avent shared.

The Honorable Minister Farrakhan of the Nation of Islam has spent decades warning Black people about how America views and deals with Black youth. “You could be 14, 15, or 16 years old, but when you are stopped by the police, they do not treat you as a child,” he said during a message he delivered in 1992 and is still relevant today. “The enemy’s fear of Black youth is so intense that the enemy will kill our young people either on the streets or in police stations. The enemy feels that they have to get rid of Black youths because if they don’t, one day Black youths will get rid of them. But what is the nature of our youth?” the Minister stated.

“The fearlessness of youth, the anger of youth, is being turned into a self-destructive modality. It isn’t that Black people want to kill one another, but business is being removed from the Black community and we, as the elders, have not supplied or created jobs for our own young people,” the Minister said. “Since we have failed in our duty and government is failing in its duty and jobs are being removed, the young people have no place to go.”