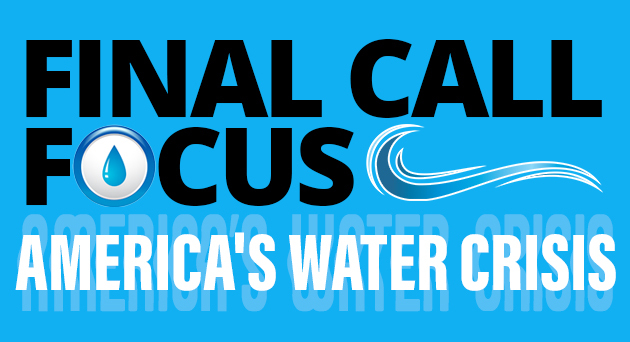 In America, access to clean drinking water is an issue often taken for granted. Addressing the maintenance of aging infrastructure requires both proactive plans and measures to safeguard the health and well-being of residents. In Benton Harbor, Michigan, local, state, and federal agencies developed a model of cooperation to address lead contamination, that if replicated, it could prove beneficial to other municipalities facing similar problems. Approximately one year after a lead water crisis caused Benton Harbor residents to avoid their tap water and rely on bottled water for drinking and cooking, the task is almost complete.

“In that 2015 water quality report, we were around 12 parts per billion (ppb), which is below the federal threshold (for lead), and we had two homes that were above the 15 parts per billion, but it was due to plumbing inside the homes,” Mayor Muhammad said of the federal guidelines requiring lead not to exceed 15ppb.

“At that time, the law for the State of Michigan, (said) the homeowner was responsible for any repairs or issues in that way, but in 2018 the City of Benton Harbor did our regular testing and found that out of 30 homes, eight had exceeded the 15 parts per billion. In the 2015 report, the highest was between zero and 12,” he explained.

According to The Herald-Palladium newspaper, “Benton Harbor received $284,000 and St. Joseph received $272,000 in the pilot lead removal program offered to 18 cities by the state.” The 2021 article also said that in October 2018: “Out of the water samples collected from 30 homes over the summer, eight were above the action level of 15 parts per billion (ppb) for lead. And the 90th percentile of the samples was 22 ppb for lead, with the homes testing between zero and 60 ppb.”

Stating how the ongoing cost of replacing all the city’s lead service lines required tens of millions of dollars more, much greater than the initial grant offered by the Michigan Department of Environmental Quality, now called the Michigan Department of Environment, Great Lakes, and Energy (EGLE), Mayor Muhammad agreed that marshaling the necessary resources—as completed to date—required an “all-hands-on-deck” approach from environmental activists and local government, up to and including county, state, and federal agencies.

“That’s where we started this work, where we had $284,000, but now we procured over $45 million, plus $8.6 million from the feds, to address the issue, which now we’re 99.2 percent complete—with the removal and replacement of all lead service lines,” Mayor Muhammad said. Adding that prior to 2018, individuals were responsible for replacing lead pipes in their own homes, he said Michigan law changed at the end of Governor Rick Snyder’s administration in 2019, and since then, municipalities are now responsible. “Some call it the Flint Law,” he noted, named for another predominately-Black Michigan city plagued with a water crisis.

According to an October 19 news release, the Benton Harbor Community Water Council praised the state and federal government for replacing nearly every lead service line in the City of Benton Harbor, giving specific credit to Governor Gretchen Whitmer, and thanking her for issuing a “whole-of-government” approach ensuring safe drinking water for the majority Black community. “Governor Whitmer’s executive directive provided bottled water to residents as 4,500 lead pipes were replaced six months ahead of schedule,” their organization’s statement read in part.

The Benton Harbor Community Water Council’s official webpage also quoted Elin Betanzo, the Detroit-based founder of Safe Water Engineering LLC, a consulting firm working to improve access to safe drinking water through engineering and policy consulting. “Benton Harbor’s pivot from a 20-year lead service line replacement plan to completely replacing its lead service lines in one year is extraordinary. We’ve learned a lot in the process of replacing Benton Harbor’s lead pipes, including the importance of keeping a close eye on the work to ensure accountability, quality, and transparency,” she said.

Concerning the politics of scarcity and the demand for environmental justice, Mayor Muhammad further stated the State of Michigan has also made additional funds available for individual households suffering from lead contamination.

“The City of Benton Harbor received an additional $10 million from the Michigan Department of Health and Human Services, working with the governor’s office where we are able to inspect inside the home, and up to $10,000, at no cost to the resident, and would be used to remove any lead contaminates inside the home whether that be lead pipes, steel pipes, paint in the windows, paint on the doors and residents will even be placed in hotels while that work is completed,” the mayor said.

Attributing the success of the all-hands-on-deck model to establishing “win-win” interactions with all parties involved, regardless of creed, class or color, Mayor Muhammad said the labor of a public servant is more important than posturing for credit and attention because in the end, all are beneficiaries of the work.

“In politics, there’s very few friendships, however, if you can foster and build relationships, then you’re able to maneuver and get things done on behalf of your constituents,” Mayor Muhammad said. “It was our unity, it was the cooperation of the residents, the patience of residents, and there were even critics who were part of the recipe and the formula to make this the success that it is.”