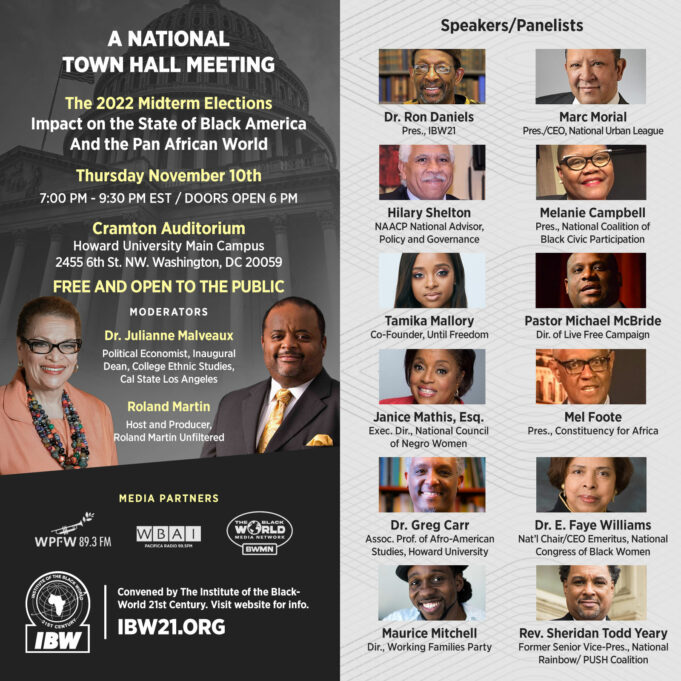 WASHINGTON—The Institute of the Black World 21st Century (IBW21), led by its president, Dr. Ron Daniels, convened a national town hall meeting on the impact of the critical midterm elections on Black America and the Pan-African World.  It brought together a “who’s who” in Black America to discuss what needs to be done to improve Black life.

“That White nationalist greed, that White nationalist, orange-infected tide was checked but it was not defeated,” said Dr. Daniels. “We bought some time, and we can always do better. I’m proud of how many Black people we registered and how many we did turn out. But we still, as Reverend Jesse Jackson said, ‘still left some rocks just lying on the ground.’”

“If we were to register 90 percent of Black people in this country and if 90 percent of them turned out to vote, we would have power disproportionate to our numbers. The biggest political part in America today, it’s not the Democrats, it’s not the Republicans, it is still non-voters. Even in this election, millions of White people didn’t vote, millions of others did not vote,” he said.

The evening was also live-streamed and addressed major issues like police brutality, and immigration. The program was held at Howard University. It was moderated by Dr. Julianne Malveaux, political economist and Ethnic Studies Department Dean at Cal State Los Angeles, and Roland Martin, host and producer of Roland Martin Unfiltered.

“Given what’s at stake for Black people in the midterm elections, I was honored to be joined by my friend Roland Martin to facilitate what will likely be the first major assessment of the outcomes on our people by such a distinguished panel of Black leaders,” Dr. Malveaux explained.

Tamika Mallory, movement strategist and co-founder of Until Freedom, started the conversation by telling the audience it is time for us to reimagine what the Black experience in America looks like. “I think about Dr. King and SNCC (Student Non-Violent Coordinating Committee) and others who did reimagine. That is how we have been able to get to where we are today. It is time that there be a reimagining and a space for people to think about what can be renewed, and what can we do to address some of the ongoing and persistent challenges that we continue to face,” she said.

“Many people are involved in that work. I think it, unfortunately, comes out sometimes as people saying they don’t want to vote anymore, which I don’t agree with at all. But what they’re really saying is that we need something different. I think we have a responsibility, and certainly, I take on the role of sitting at the intersection of explaining why there is power in our vote.  But also understanding that a vote alone is not the only tool,” said Ms. Mallory.

“We’ve always known this. I’m not saying anything new, but that there must be something in this moment that speaks to where we are as a people today and we are all trying to figure that out together.”

Mr. Martin directed the conversation to immigration which he described as a potent issue. “A lot of Black folks are talking about the border, ‘we are losing jobs and opportunities.’ Ten percent of the Black population in the United States are immigrants,” he said.

“We have a number of people who frankly are anti-immigrant, not realizing they’re also speaking against Black people actually helping us when it comes to the Census and in other areas, because they’re 10 percent of our population.”

He asked Dr. E. Faye Williams, National Chair/CEO Emeritus of National Congress of Black Women, to respond to those sentiments expressed by Black people concerned with this issue.

“There’s so many people who think immigration means them and not us.  We have not taught enough about who we are so that we know who we are. We cannot listen to this craziness that people are talking about, that we are teaching in our schools. We need to become teachers too, and we need to have those Saturday classes, those Sunday classes and teach our people what they need to know,” she said.

Dr. Williams explained that Black people must unite and do things in the best interests of the Black community. “Immigration is one of our issues, but we’ve never been taught that as Black leaders,” she said. “Sometimes we can be cruel to one another without really knowing why we are. We have to stop the jealousy. We have to unite. We are stronger when we are one. They can knock us down when we are one by one by one saying something. But when we do it together, we can be as strong as we need to be to do the things for our people and to get justice for our people.”