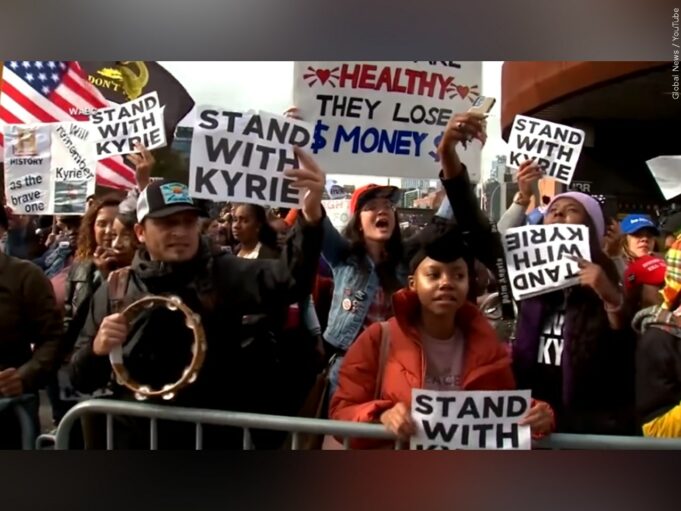 (Pharaoh) said: You believe in him before I give you leave! Surely he is your chief who taught you enchantment. So I shall cut off your hands and your feet on opposite sides and I shall crucify you on the trunks of palm-trees, and you shall certainly know which of us can give the severer and the more abiding chastisement.”

The Bible says that the Lord “loves those who seek him early.” For Black America it was an early morning surprise, a divine blessing from Allah (God), that we all received when on the morning of November 10th, Allah’s (God’s) anointed servant—the Honorable Minister Louis Farrakhan—made his official public statement on the recent controversies surrounding Ye (formerly known as Kanye West) and Kyrie Irving.

The Minister’s passionate defense of these two brothers—members of the Black community—provided for all of us in Black America the much-needed perspective we all have been missing. And as the clips of the Minister’s nearly hour-long message went viral, the comments of those reacting to his message were effusive in praise and expressions of gratitude. In reading the many comments on social media sites like The Shade Room and others, I drew the conclusion that what the Minister was speaking was equal to what many within Black America was feeling and subconsciously waiting on the Minister to speak!

In the Minister’s brilliant and passionate message, he forthrightly addressed the anger that Jewish leaders and NBA owners have because of Kyrie Irving’s pursuit of self-knowledge. Kyrie has been suspended by the Brooklyn Nets because he posted in social media an advertisement for a documentary, sold on Amazon, entitled “From Hebrews to Negroes.”

Jewish groups like the ADL (Anti-Defamation League of b’nai b’rith) have lead the charge in attempting to “punish Kyrie.” They have made claims that the documentary is anti-Semitic and denies the Jewish Holocaust. And despite Kyrie’s apology over hurting the feelings of those who were offended by his post, his apology has been largely rejected. The ADL in its advisory capacity to the NBA has been a part of the creation of the following six steps created to stipulate what Kyrie must do in order to play again with the Brooklyn Nets.

“The most hated and despised thing today in this, the devil’s wicked world, is the truth or true knowledge of God and the devil.”

But Kyrie-in his belief that Blacks are Semites, is not on an island flirting with a novel concept. There is a long history of the awakening of Black people in America to the reality of our divine origin. Consider the following important expressions from the historical archives that powerfully articulate the divinity of Blackness.

“We believe that the so-called Negroes are most in need of mental resurrection; therefore they will be resurrected first. Furthermore, we believe we are the people of God’s choice, as it has been written, that God would choose the rejected and the despised. We can find no other persons fitting this description in these last days more than the so-called Negroes in America. We believe in the resurrection of the righteous.”

— The Most Honorable Elijah Muhammad, Point No. 5, “What The Muslims Believe”

“Here we will note it as a curious circumstance, that Several of the above-named Saviors are represented as being black, Jesus Christ included with this number. There is as much evidence that the Christian Savior was a black man, or at least a dark man, as there is of his being the son of the Virgin Mary, or that he once lived and moved upon the earth.

And that evidence is the testimony of his disciples, who had nearly as good an opportunity of knowing what his complexion was as the evangelists, who omit to say anything about it. In the pictures and portraits of Christ by the early Christians, he is uniformly represented as being black.

And to make this the more certain, the red tinge is given to the lips; and the only text in the Christian bible quoted by orthodox Christians, as describing his complexion, represents it as being black. Solomon’s declaration, “I am black, but comely, O ye daughters of Jerusalem” (Song of Solomon 1:5), is often cited as referring to Christ. According to the bible itself, then, Jesus Christ was a black man.”

“We have as much right biblically and otherwise to believe that God is a Negro, as you buckra, or white, people have to believe that God ‘is a fine looking, symmetrical and ornamented white man. For the bulk of you, and’ all the fool Negroes of the country, believe that God is white- skinned, blue-eyed, straight-haired, projecting-nosed compressed-lipped and finely-robed white gentleman sitting upon a throne somewhere in the heavens we certainly protest against God being a white man or against God being white at all as long as we remain among whites.

The Negro will believe that the devil is black and that he (the Negro) favors the devil, and that God is white and the (the Negro) bears no resemblance to Him, and the effect of such a sentiment is contemptuous and degrading, and one-half of the Negro race will be trying to get white and the other half will spend their days trying to be white men’s scullions in order to please the whites; and the time they should be giving to the study of such things will dignify and make our race great will be devoted to studying about how unfortunate they are in not being white.”

“There is no part of the Bible with which they are so familiar as the story of the deliverance of the children of Israel. Moses is their ideal of all that is high, and noble, and perfect, in man. I think they have been accustomed to regard Christ not so much in the light of a spiritual Deliverer, as that of a second Moses who would eventually lead them out of their prison-house of bondage.”

Fear of Knowledge of Self

This belief in the divinity of Black life and the Black struggle was viewed as problematic for our former slave masters. The enterprise of the trans-Atlantic Slave trade was made possible to a great extent by the depriving of the enslaved African a knowledge of their true history and origin in the world. These were in fact the “makers, owners of the planet earth and fathers and mothers of civilization ” now being broken and forced into a dehumanizing servitude. The slave master did everything they could to keep our forefathers and mothers from knowing the truth of themselves and the truth of God.

“Keenly aware of their inability to read the Scriptures, many slaves came to view education with a religious awe and bitterly resented the slaveholders’ ban on reading. “Dey jus’ beat ‘em up bad when dey cotched ‘em studyin’ readin’ and writin’,” recalled William McWhorter. “Folks did tell ‘bout some of de owners dat cut off one finger evvy time dey cotch a slave tryin’ to git larnin’ ”

“Us poor niggers never allowed to learn anything. All the readin’ they ever hear was when they was carried through the big Bible. The massa say that keep the slaves in they places … The white folks feared for niggers to get any religion and education.”

Professor Raboteau notes the danger in slaves seeing themselves in a divine light as he discusses “Gabriel’s Rebellion”:

“In 1800 an event occurred which had a widespread effect on white fear of slave insurrection and on reaction against slave conversion—Gabriel’s Rebellion, a slave insurrection planned against Richmond, Virginia. Religion played a role in the attitudes and discussions of the rebels. ‘Preachings,’ or religious meetings, served as occasions for the recruitment of slaves and for plotting and organizing the insurrection.

Gabriel’s brother Martin, one of the plot’s leaders, was known as a preacher. He used the Bible to argue that their plans would succeed even against superior numbers. In one discussion of the rebellion Martin contended that ‘their cause was similar to the Israelites,’ and that in the Bible God had promised ‘five of you shall conquer an hundred & a hundred a thousand of our enemies.’”

As Pharaoh in the Holy Qur’an feared that the religion of the enslaved Children of Israel would be changed and their change of religion would create mischief in Egypt, so did our white enslavers in America express the same fear and dread. As a result, they outlawed preaching by their slaves, as W.E.B. DuBois notes in “History of The Negro Church”:

“A wave of legislation passed over the South prohibiting the slaves from learning to read and write, forbidding Negroes to preach, and interfering with Negro religious meetings.”

The infamous slave master of Fredrick Douglass reminds us of the current Kyrie Irving controversy. Kyrie is being punished for seeking greater knowledge of self, one that connects him to God and to his people. Consider how Kyrie is being treated and the following quote from slave master Hugh Auld:

“Learning will spoil the best nigger in the world. If he learns to read the Bible it will forever unfit him to be a slave. He should know nothing but the will of his master, and learn to obey it. As to himself, learning will do him no good, but a great deal of harm, making him disconsolate and unhappy. If you teach him how to read, he’ll want to know how to write, and this accomplished, he’ll be running away with himself.”

The history teaches us that they fear the knowledge of self among us because it is dangerous to their ability to continue to rule over us. They fear this knowledge will inspire retaliation. It’s the Nat Turner Effect. After Nat Turner’s rebellion, Virginia state legislator Henry Berry discussed prohibiting slaves access to knowledge and not their access to weapons!

“Sir, we have as far as possible closed every avenue by which light may enter their minds. We only have to go one step further to extinguish their capacity to see the light and our work will be completed. And they would then be reduced to the level of the beasts of the field and we should be safe.”—Henry Berry, Virginia House of Delegates, January 1832

Thanks to Minister Farrakhan, we are not deceived. The Knowledge of Self is dangerous to white supremacy; it destroys Black inferiority. We stand with Kyrie and all of our people who yearn for truth and the joy that self-knowledge brings.