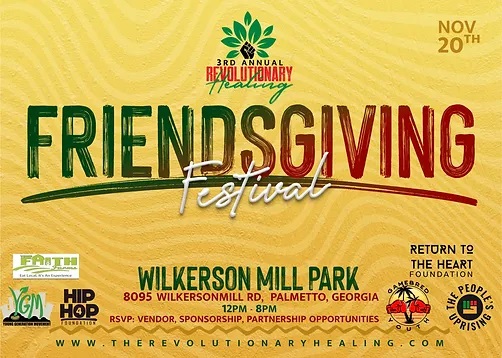 Join in on the Third Annual Friendsgiving Festival on Nov. 20 in Palmetto, Georgia

Since 2020, the third Sunday in November has become a break in the traditional American holiday season. This year is no different. YoNasDa LoneWolf, a prominent activist of Black and Native American descent, is back with her third annual Friendsgiving Festival in Palmetto, Georgia.

On Nov. 20, organizers will welcome people from various backgrounds to participate in meditation, art therapy, gardening, horseback riding and much more, all centered around the theme of “Friendships of All Walks of Life.”

The annual Friendsgiving Festival is an expansion of Ms. LoneWolf’s monthly Revolutionary Healing events. Attendees typically gather in outdoor spaces around Georgia to focus on physical and mental health, culture, and community.

It began two years ago, when Ms. LoneWolf received a lung cancer diagnosis. She found out on May 29, 2020, the same day a rally she helped organize in Atlanta, dubbed Freedom Summer, which protested the killings of George Floyd, Ahmaud Arbery, Breonna Taylor and others, turned into a chaotic uprising.

Ms. LoneWolf was used to being on the front lines for social justice causes, but her diagnosis, along with the threat of COVID-19, forced her off the physical front lines and into her home. That’s when she sought guidance from study guides written by the Honorable Minister Louis Farrakhan, titled “Self-Improvement: The Basis For Community Development.”

She opened a new chapter for her activism and started Revolutionary Healing. She invited musical artists, healers, nutritionists and others to provide a peaceful and safe space for people to heal their trauma.

Ms. LoneWolf drew inspiration from her mother, Wauneta LoneWolf, who was a motivational speaker and held retreats and conferences focused on self-improvement and healing.

“I felt like, especially in the health and wellness community, we charge an arm and a leg for people to get therapy, to get yoga,” Ms. LoneWolf said. “And these are people that need the services, but I was like let’s have it for free. Let’s see if these presenters will volunteer their time to give back and then on top of that, let’s pick a new location where we’re always outside.”

She drew more inspiration from her mother and created the Friendsgiving Festival.

About a month after her last Thanksgiving, Wauneta LoneWolf died of lung cancer. Upon receiving her own cancer diagnosis, Ms. LoneWolf felt she needed to keep the Friendsgiving tradition going.

The annual Friendsgiving Festival has drawn hundreds of people from across the country. This year, the event advertises healing sessions, gardening, learning to prepare food on a budget, and storytelling. Musical artists including Grammy-nominated singer Sunshine Anderson will be performing. There’s also The Children’s Village, which includes sessions catered to children and teenagers.

Erik Andrade, an activist and spoken word artist in New Bedford, Mass., will also be performing. He first met Ms. LoneWolf through their work together during the Flint, Mich., water crisis. He says the concept of Revolutionary Healing is needed.

He says the events help him to feel less alone. “I always leave feeling recharged, rejuvenated, and reaffirmed of purpose because sometimes in the struggles that we may be in, it becomes hard to keep hope because we feel like a minority of voices pushing back,” Mr. Andrade said.

Christine McClendon plans to volunteer at this year’s Friendsgiving. She makes the drive about every month from Clermont, Fla., to attend Revolutionary Healing events.

“It changed my life the first time I went and there was no judgment,” she said. “I felt like I had a safe space to go to learn new things without anyone thinking bad of me. So, I didn’t care how long of a drive, I didn’t care how sleepy I would have been, or if I had to work the very next day. I said I was going to make that event. It’s worth it.”

Ms. LoneWolf says attendees feel a sense of community when they come.

“We’ve had people come and reveal their soul, their whole entire being and they come back the next month,” she said. “And there’s no reminding them of, oh, yeah, remember last time you said. … They feel like they are in a safe space. And that’s what it all boils down to is creating a safe space for everyone.”

Currently, Ms. LoneWolf is in stage four of her cancer diagnosis. She says she’s grateful to be able to experience the third annual Friendsgiving.

“To be honest, I didn’t think that I’d be able to make it to see my third year,” she said. “Allah, God is giving me grace to be able to give back and to serve the community with various things of self-improvement, so it’s truly a blessing.”

To commemorate her service to her community, the City of South Fulton established Nov. 21 as Queen YoNasda Appreciation Day. The city is also a sponsor of the Friendsgiving Festival.

This year’s festival will be held at Wilkerson Mill Park in Palmetto, Georgia, on November 20 from 12 p.m. to 8 p.m. To learn more, visit therevolutionaryhealing.com. —J.S. Adams, Contributing Writer