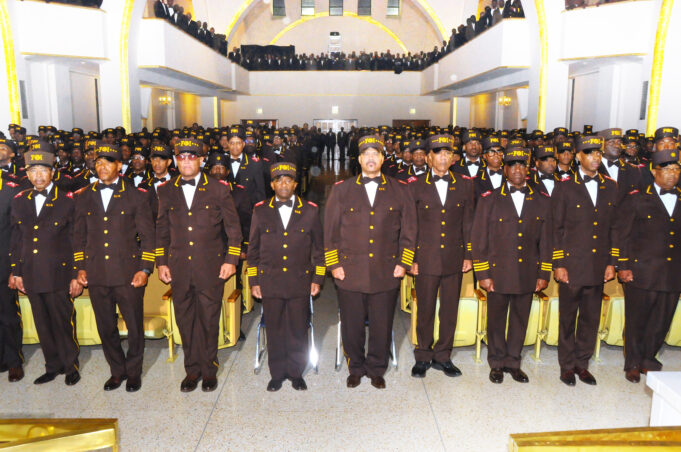 “I thank Allah for this most beautiful and most dutiful of all servants. I don’t know if there could have ever been a better gift given to the Black man and woman of North America,” said Student Minister Nuri Muhammad to the resounding applause of the audience filled to capacity. “If you never thought that God loved you, you gotta know that God loves us. Look at this precious gift he gave us in the person of the Honorable Minister Louis Farrakhan.”

Along with highlighting the value, importance, divinity and relevance of the Minister, Student Minister Nuri Muhammad used the Teachings of the Most Honorable Elijah Muhammad,  as taught and exemplified by Minister Farrakhan, as the base of his lecture that laid out a blueprint for making our communities a decent and safe place to live.

During the lecture, he expounded on how to identify the difference between colony and community, why Black communities across the United States are colonies and how we can finally unite while staying unique. The first problem he focused on was the absence of the Black male.

To illustrate that point, Student Minister Nuri Muhammad mentioned a problem with elephants at Pilanesburg National Park game reserve in South Africa. A group of younger elephants who had been relocated with only adult female elephants from another park were demonstrating destructive behavior among one another. Rangers then began finding the dead bodies of endangered white rhinoceroses.

An investigation revealed the culprits to be bands of juvenile male elephants caught on camera chasing down the rhinos, knocking them over, and stomping and gorging them to death with their tusks. The juvenile elephants were terrorizing other animals in the park as well. And the female elephants had abandoned all nurturing, maternal instincts. All of this is uncommon elephant behavior. Observers realized that male adult elephants kept young testosterone-induced younger males in check.

Rangers got helicopters and airlifted adult male elephants to the park and within weeks, the bizarre and violent behavior of the juvenile elephants stopped completely. Even the female elephants started “mothering” again. The younger elephants were following the adults around learning common behavior patterns.

“This sounds like what’s going on in the Black community in the concrete jungles of America,” explained Student Minister Nuri Muhammad.

“This weekend we were mentally helicoptered and lifted, by God’s man, the Honorable Minister Louis Farrakhan and we are on our way back to (the various cities across America) to re-establish and balance the ecosystem.” Thousands of F.O.I. (Fruit of Islam, the men of the Nation of Islam) came to Chicago for the special gathering which was held on Nov. 5. The weekend of camaraderie and brotherhood carried over into Sunday as a standing-room-only crowd at Mosque Maryam jumped to their feet and applauded several times throughout Student Minister Nuri Muhammad’s message.

Very skillfully, Student Minister Nuri Muhammad began to define terms that show how, too often, people use certain words interchangeably when they have totally different meanings.

There is a difference between looking and seeing. “When you look at something it means that the eye registers light and we recognize that there is an object in front of us, but to see means that we don’t just use the two eyes, we use the third eye, to give a proper evaluation, accurate appraisal of what we are looking at,” he said.

He went on to explain the difference between listening and hearing and a daddy and a father. “There is a difference between a daddy and a father. We use them interchangeably, but a daddy is someone who knows how to plant a seed in the vaginal track to bring birth to a child. But the Honorable Minister Louis Farrakhan said if you look at the word ‘father’ and the word ‘farther,’ it is the same word with just one letter added to it. Why? Because the job of a father is to make sure that the children go farther in life. In fact, the goal of a real parent is not for their children to be like them, but the goal is for the children to be better than them.”

From colony to community

During his presentation, Student Minister Nuri Muhammad explained that currently the word “colony” describes the environments where most Black people live. He defined a colony as an area where people live in an environment but they do not own the business or the property in the environment.

“When you come to our communities or our neighborhoods, you find a White man-owned payday loan spot, a Vietnamese-owned nail spot, a Korean-owned beauty supply spot, Arab or Pakistani-owned convenience store attached to a gas station with an Arab standing behind four inches of bulletproof glass selling cigarillos, Black & Milds, drug paraphernalia and pork even though he don’t use none of that,” he explained.

Another sign of a colony is when people can come into your neighborhood and disrespect the women who live there.

“We should not allow anyone to come into our community and disrespect our women. I don’t care who you are, you don’t disrespect the queen of the planet earth,” he said to a standing ovation. “The Honorable Elijah Muhammad said we must respect and protect the Black woman. He taught us that a nation can rise no higher than its woman. He taught us that there is no such thing as a no-good woman.

Any no-good woman was made that way by a no-good man. He taught us that the mother is the first nurse, the first doctor, the first teacher and the Minister said it like this, ‘mother is God in baby language.’ So, I don’t care who you are: Arab, Pakistani, Jew, White man or a Black man. When you see our sisters, our mothers, our daughters, our aunties, you better show respect and reverence to the Black woman!”

The change from colony to community starts with a change in mindset. Ultimately, Black people can’t blame others for the conditions of the Black community. “Where we live is nothing more than a physical manifestation of the collective consciousness of the people who share space and time with one another,” he said. “If the hood is dirty, it’s because the mind is dirty. If the hood is disorganized, it’s because our thoughts are disorganized,” explained Student Minister Nuri Muhammad.

Too often, people who don’t live in the community take their profits from the business and improve their community, send their children to school and use it to improve the profit margins in their business.

“Imagine if we had all the necessities of life being supplied by Black businesses? Then every time that (business) makes a profit and they invest some of their profit to improve their quality of life, by proxy they improve the neighborhood.

Unity is the key to our success

Since coming out of slavery, the Black community has recognized that the solution to our problem centers on unity. The problem, Student Minister Nuri Muhammad explained, is the resistance around how people understand what the word unity means. “Unity does not mean uniformity,” he said.

Another problem that needs to be addressed is that our unity must have both “horizontal and vertical” meaning, not only must the Black community unite with each other, but we must align vertically with the Creator and universal laws of truth and harmony.

“How can I be tied and united with a child molester? How are we gonna have real unity if you might steal from me? How are we going to be together if you might look at my wife when I’m not around?” he said. “Horizontal unity is brothers and sisters coming together with each other. But there also has to be vertical unity where we are not only in unity with one another as brothers and sisters but also in unity with the principals and the laws and statutes of God himself,” he explained.

Progress cannot be made by being in unity with behavior that is against the well-being of the community and does not help the community survive and thrive. Unity means we love, respect and support one another.

“The Honorable Minister Louis Farrakhan said that our unity would solve 95 percent of our problems. The Most Honorable Elijah Muhammad said we must ‘unite or perish.’ We have to get out of this Eurocentric, White man philosophy of ‘I gotta get mine, you gotta get yours,’ ‘every man for himself.’ That didn’t come from us that didn’t come from God. The Honorable Elijah Muhammad said that no one man can ever rise above the condition of his people,” he said.

“To unite, there must be recognition of one leader. When the resumes are being presented, there is one man that is the last man standing. He’s a man that has the most impeccable, longest-lasting track record of anybody that has ever stood up for us. Sixty-seven years of unconditional love and dedication and sacrifice. That one man, that one voice, that one leader that we should all recognize is the Honorable Minister Louis Farrakhan!”

To view the entire lecture, go to www.media.noi.org. Stay tuned for additional photos and coverage in an upcoming issue of The Final Call.