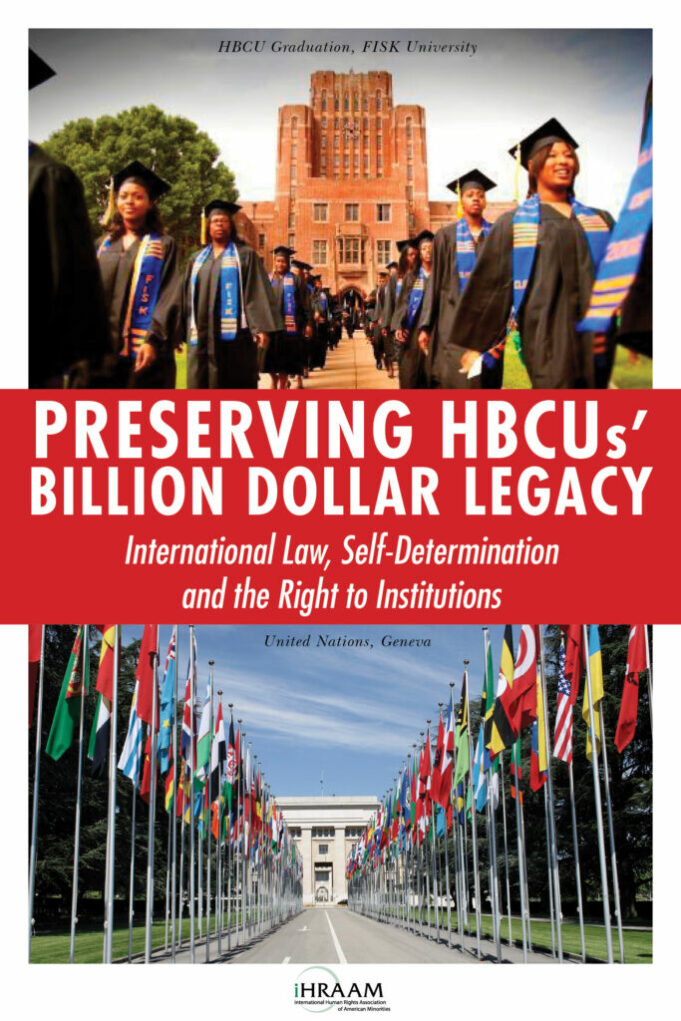 During the 77th Session of the United Nations General Assembly recently, an annual sidebar meeting was held at the Permanent Mission of the African Union to the United Nations in New York. Scholars, development practitioners, along with civil society representatives met in-person and virtually about strengthening partnerships between Africa and Historically Black Colleges and Universities (HBCUs).

The sidebar was hosted by the African Union (AU), the United Nations Development Programme (UNDP)-Africa, and the Office of Historically Black Colleges and Universities Development (OHBCUD).

The theme was “Diaspora for Development: Leveraging Africa’s Sixth Region to Realize the Continent’s Promise” and came on the heels of the 20th anniversary of the African Union formation in Durban, South Africa, in September 2002. African leaders decided, in order to realize Africa’s fullest potential, focus on a Pan-African agenda and increased cooperation between African states, as well as African people was paramount. Presenters at the summit agreed the African diaspora are an integral part of this vision.

“Your work in upholding and promoting the interests of Africa and African Diaspora beyond the United States is something that the AU identifies with,” said Fatima Kyari Mohammed, AU ambassador to the UN.

“I view this gathering as an important platform for us to project from a position of strength, our collective priorities for a better and more coordinated relationship across oceans,” she said.

The African diaspora is represented at the AU as its Sixth Region. The region makes up African descendants living outside of the continent and comprises of African nationals called “Continental Diasporans” and “Historical Diasporans”—descendants of the Trans-Atlantic Slave Trade scattered in the Americas, the Caribbean and Europe. The other five regions of the AU are North, West, Central, East, and Southern Africa. The summit was held Sept. 25 and 26.

The summit agenda explained the backstory for the annual meeting is partly Africa’s “development paradox,” meaning a continent rich in minerals, natural resources, and enormous human potential, but home to 33 of the world’s 46 least developed countries and two-thirds of its impoverished populations. The participants discussed bridging the gap by harnessing the potential, talents and skillsets found in its diaspora.

The moderator, Dr. Raymond Gilpin, head of Strategy Analysis, Research Team at UNDP-Africa, said “the conversation is timely because Africa, like the rest of the world, is reeling from shocks emanating from crises like “climate change,” the “COVID-19 pandemic” and wider impacts of the Russia-Ukraine war.

However, Africa and its Diaspora has been affected disproportionately. Millions have been pushed back into grinding poverty. Food insecurity is an acute reality. Global trade disruptions and imported inflation has stymied African economies, affecting African households. The vast majority of people of African descent today feel more insecure than ever, he said.

“At UNDP, we believe that this is an opportune time to reset development thinking and development practices as it pertains to Africa,” Dr. Gilpin said.

Over seven decades development thinking only managed poverty. “How do we move from an overwhelming focus on just poverty to investing in infrastructure … technology … in people, which will pave the way for a 21st century renaissance across the African continent,” Dr. Gilpin said.

He sees the Diaspora and particularly HBCUs playing a pivotal role in capacity-building, training, and education. The conference agenda noted “the African-American diaspora is uniquely positioned” to “unlock the continent’s financial, educational and economic potential,” though African descendants are in many countries.

The UNDP-Africa and the Chicago-based OHBCUD signed a Memorandum of Understanding in 2019 on collaborating around HBCUs possibilities in Africa’s development.

In partnership with the UNDP on the area of the International Distance Learning, in 2021 virtual courses on economic and social transformation in Africa and the diaspora began. Starting with five HBCUs, including the University of Guyana in South America, 55 students from 18 African countries came through the courses.

“This past summer 2022, we have doubled the number of participating universities to 10,” said Mr. Muhammad, with an increased “total of 86 African students representing nearly 20 African countries.”

Alongside students from the U.S. and the Caribbean, the African students took courses in economics, political science, marketing, education, global trade, organizational behavior, and entrepreneurship.

He said in a project survey nearly 45 percent of the “well-motivated group of young leaders” stated they own or manage a small to medium-sized business having one to 500 employees. Those surveyed agreed to volunteer and work in association with UNDP-Africa and the HBCUs to further implement the sustainable development goals in their respective countries.

Dr. Ron J. Price of Texas Southern University stressed the importance of unity and true partnerships with Africans on the continent.

“The most powerful thing in the universe is love, and that’s the one thing missing in our community. We don’t love one another,” Dr. Price said.

Self-love and seeing the greatness of God in each other would electrify Black people in America and in the world. “We can transform whatever is happening on the continent of Africa, the United States and have true partnership,” Dr. Price said.

The limited success of the OHBCUD group and the UNDP has to be scaled up to the tens of hundreds to affect the continental issues.

“I think the way to scale up would be, first of all, by HBCUs beginning to collaborate among ourselves, instead of each institution trying to carve out a miniscule segment,” said Dr. Fikru Boghossian, dean of the School of Business and Management at Morgan State University.

He gave an example of a $16 million PNC Foundation grant to Morgan State to expand entrepreneurship education in America. They united with Howard University, Texas Southern University and Clark Atlanta University on the project, sharing what each brought to the table.

The summit agenda cited a 2021 McKinsey study showing Black American graduates of HBCUs, and Predominantly Black Institutions (PBIs) in the U.S. have higher socio-economic mobility than Blacks who attended other institutions. It noted the institutions have centers of excellence, in business, agricultural development, political science, law, medicine, and other fields relevant for Africa’s progress toward her Agendas 2030 and 2063 blueprint for sustainable development and transforming Africa into a future global powerhouse.

The plight of Africa and prospective role of her descendants in the diaspora has been a long consideration by leaders. The Honorable Minister Louis Farrakhan of the Nation of Islam is a strong advocate for continental unification and U.S. Blacks setting up new realities for themselves with Africa under the right conditions.

Minister Farrakhan has also said with the benefit to Africa, must also be the commitment to develop economically neglected and marginalized Black communities in America.

“With this force of us returning home, most of us with nothing, but we do have from the HBCUs human capital, a skill base like no other that need to be used for sustainable economic development,” said longtime activist and Queen Mother Delores Blakely, at the summit.

She raised the point of including reparations in the conversation about Africa’s development goals and the role of the Diaspora.