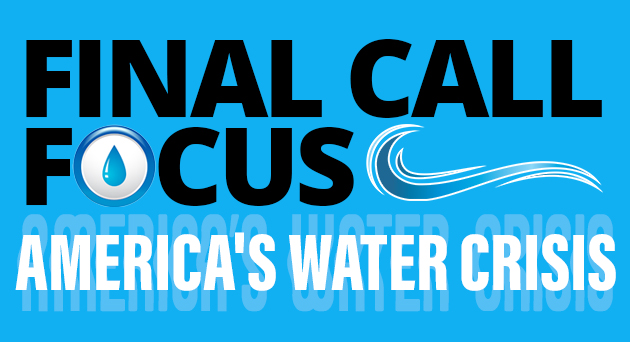 Residents continue to endure health hazards from contaminated drinking water, and the indignities of justice delayed, eight years after the Flint, Michigan, state-appointed emergency manager switched the city’s original water supply to the highly toxic Flint River as a cost-saving measure in April 2014.

Although the city changed back to its original Detroit River source after the spotlight of national publicity, an indignant visit from then-President Barack Obama, and the filing of one of the largest lawsuits in state history, the damage done to the people and to the infrastructure still requires more than just promises to correct what has long been an egregious injustice against a population of just over 81,000 people.

Arthur Woodson, 55, a lifelong resident of Flint and an activist dedicated to seeing repairs made and justice served, told The Final Call that the initial issue with Flint water had been with the city overcharging residents for its use. He shared that the 2014 switch to the Flint River soon revealed contamination, not only from cancer-causing TTHMs (Total trihalomethanes), but also from lead and bacteria such as E-coli and Legionella. “My cousin, she had a catheter in her chest for chemotherapy, she used the water (to clean it), the bacteria got down in that and got in her blood system and she had septic shock. So, that’s when I knew something was really wrong with Flint water,” Mr. Woodson said.

Adding that serious problems remain eight years later, Mr. Woodson insisted that to date, those who created the crisis have yet to be held accountable. He said the full impact of its long-term health effects on the city’s Black and poor people have not yet manifested in its entirety.

“We allowed the governor, and all the rest of the people, the lawyers, the ambulance-chasers, and everybody that came here, we allowed them to set the narrative as lead. So, you still have all of these different contaminants and never found the Legionella source, so when it gets hot, we have outbreaks of Legionella (Legionnaires Disease), we have PFAS (Per-and polyfluoroalkyl substances)in our water, and everywhere else I’ve seen, that had a PFAS contamination, they switch out every single pipe, every line, they do all that,” Mr. Woodson stated emphatically.

Sean McBrearty, the Michigan legislative and policy director of Clean Water Action, an organization dedicated to protecting the environment, health, economic well-being, and community quality of life through activism, told The Final Call that his organization has focused its attention on replacing water infrastructure in Michigan while advocating access to it as a human right.

“One of the key things that frankly doesn’t get reported on enough about the Flint water crisis is the crisis of democracy that preceded it,” Mr. McBrearty said. “The city council didn’t make the decision to switch to Flint River water, that decision was made by an unelected, unaccountable emergency manager, so the people did not have a voice in that process.”

Looking at lead contamination alone, water quality concerns are not only a Flint, Michigan, problem, but also a national problem requiring adequate funding for upgrades, Mr. McBrearty stated. Adding that access to clean drinking water requires more than just lip-service in a country like the United States, he said that in Flint and in too many other locations, municipalities have been depending on outdated infrastructures and on lead service lines that should have been removed long ago.

“While the action level for lead in drinking water here in Michigan is five parts per billion, which is lower than the national standard now, we do know that there is no safe amount of lead to be in drinking water, especially when it comes to the health of children,” Mr. McBrearty continued. “At the time of the Flint water crisis really coming out in 2014, we knew we had about 460,000 lead service lines in use across the state, so making sure that infrastructure gets replaced is critical and over the last four years the state has done better in investing in water infrastructure but, there is still a long way to go.”

Dr. Mustafa Santiago Ali, Ph.D., a former official with the Environmental Protection Agency (EPA) during the Obama Administration, who served as a Senior Advisor for Environmental Justice, told The Final Call that when communities are already struggling in a survival mode, existing burdens often limit their ability to concern themselves with impacts beyond their immediate realities and concerns beyond the here-and-now.

“In many instances when we are uninsured or underinsured, that’s when we have these health impacts that are going on from the initial sets of those toxic exposures, from the various things that are in the water. We often find that individuals will put off going to the doctor or will wait and use the emergency rooms, and you usually don’t get a thorough diagnosis,” Dr. Ali said of those suffering from both short and long-term illnesses, such as cancers and brain disorders linked to the chemicals, bacteria, and heavy metals in contaminated drinking water.

“The other part is on the education side, because when folks are dealing with these sets of exposures, it also impacts how and if our children can learn, so we’ve got to pay particular attention to the additional sets of resources that are needed,” Dr. Ali said.

“Lead is a neurotoxin, so it lowers I.Q. points, it causes neurological problems, and in many instances, there are studies that have shown linkages to hyperactivity and attention deficit disorders.”—William P. Muhammad, Contributing Writer