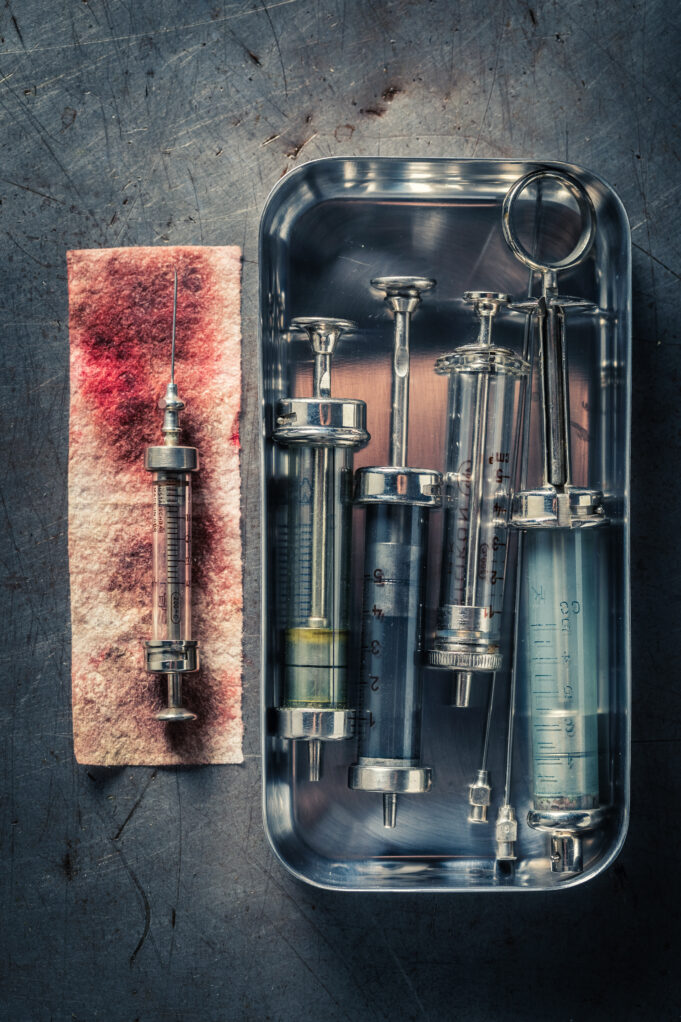 —The Most Honorable Elijah Muhammad

Recently, the mayor of Philadelphia “officially” apologized to the hundreds of prison inmates who were subjected to a battery of “scientific” experiments at Holmesburg Prison from the 1950s to the 1970s that involved hundreds of experimental drugs, industrial chemicals, viruses, fungi, and other unknown substances with military applications. The human guinea pig experiments have been compared in their villainy to the experiments conducted on Jewish prisoners during Hitler’s Nazi regime.

And that is why it would surprise many to learn that the Holmesburg atrocities against the 85 percent Black inmates were orchestrated by a Jewish dermatologist named Dr. Albert Kligman and several of his Jewish colleagues from the University of Pennsylvania. The “apology,” though it comes more than 70 years after the fact, nonetheless reveals to Black America exactly how the Black–Jewish relationship “evolved” beyond the cotton fields and auction blocks of the slavery era.

In his statement issued October 6th, Philadelphia Mayor James Kenney called the Jewish-run experiments on Holmesburg inmates “another tragic example of disgraceful and unethical practices of medical experimentation on people of color throughout our country’s history.” However, the mayoral “apology” does not acknowledge the true heroes of this wicked episode: members of the Nation of Islam who not only confronted the powerful entities behind the experiments but also ran the Nazi doctors out of Holmesburg Prison.

As for Mayor Kenney, a White gentile, he is here engaging in classic political hypocrisy. We would call it Tricknology. He claimed that his “apology” is in recognition of “the deep distrust experiments like this have created in our communities of color.” But it was this Mayor Kenney who in 2020 during a peaceful George Floyd protest approved police use of CS tear gas on Black protestors. Like napalm, CS tear gas was made intentionally lethal to drive enemy soldiers out of their hiding places by causing asphyxiation.

It is known to cause severe damage to the heart, lungs, and liver. The wickedly ironic fact is that CS gas—the very tear gas that the democrat mayor James Kenney used to attack peaceful Black protesters—may have been one of the 254 chemicals that Dr. Albert Kligman tested on Black inmates at Holmesburg Prison.

Further, Philadelphia PD’s stock of CS tear gas was obtained through Safariland munitions company, a supplier of military-grade weapons, including CS tear gas, rubber bullets, and pepper spray. It is owned by Warren B. Kanders, a Jew who was thrown off the board of the Whitney Museum when the art world found out that his tear gas was brutally used by police against the Palestinians, against asylum-seekers at the U.S.–Mexico border, and on Ferguson’s Blacks after police murdered Michael Brown.

But Mayor Kenney was only getting started. He executed one of the most deadly acts of medical racism in history when he forced anyone doing any kind of business in Philadelphia to be injected with the unknown chemicals government officials call a “COVID-19 vaccine.” At least Dr. Kligman and his colleagues knew the chemicals tested on their Black victims. Kenney has no idea what he forced into the veins of Black Philadelphians, because Pfizer, Moderna, and Johnson & Johnson won’t divulge the ingredients.

Whatever the shots contain, we do know that the injections do not stop infection or transmission of COVID-19, as is claimed; indeed, they have no apparent medical benefit at all. According to the CDC’s own records, the “COVID-19 vaccines” are the likely cause of more than 31,000 deaths and hundreds of thousands of permanent injuries—in America alone. Just how many Philadelphians have been disabled or perished by way of Kenney’s kool-aid mandate is not yet known.

Further, under Kenney’s draconian lockdowns the number of Black business owners in Philadelphia fell by 68%. By comparison, the number of White businesses fell 44%. More than half of Black business owners reported losing 50% or more of their revenue through these disastrous shutdown policies, and many of these small businesses that employed thousands of our youth have shut down forever. Mayor Kenney characterizes Dr. Kligman’s experiments on hundreds of inmates at Holmesburg as “atrocities”—and they most certainly are. But Kenney’s own current guinea pig experiment on 654,000 Black Philadelphians surpasses even Holmesburg in its satanic consequences.

Let us now examine how that forgotten episode in Black–Jewish history unfolded in the bowels of Philadelphia’s notorious Holmesburg Prison.

In 1951, just four years after Hitler’s death camp doctors were tried and executed at Nuremburg for their atrocities against the Jews, Dr. Albert M. Kligman, the self-described “son of poor East European Jewish immigrants,”entered Holmesburg Prison for the first time. His reaction to seeing all those incarcerated Black men was truly demonic: “All I saw before me were acres of skin … It was like a farmer seeing a fertile field for the first time.”

But Kligman was not a farmer and nothing he did should be associated with that noble profession. He was a professor of dermatology at the University of Pennsylvania School of Medicine and, under contract to at least thirty-three major pharmaceutical, chemical, and cosmetic companies, including Pfizer, Johnson & Johnson, Merck, DuPont, and DowChemical, Kligman began to conduct experiments on the prisoners.

A 1964 issue of Medical News reported that nine out of 10 prisoners at Holmesburg Prison had become medical test subjects. Kligman tested the toxicity effects of many chemical warfare agents like dioxin—the deadly cancer-causing chemical in the defoliant Agent Orange, used by the United States to destroy the Asian man in the Vietnam War. And he tested mind-disabling psychoactive drugs like LSD for the U.S. Department of Defense and for his own commercial interests. In the process Kligman became wealthy, rising to the top of the field of dermatology.

Kligman was like a Jewish kid in a candy store. He admitted: “I began to go to the prison regularly, although I had no authorization. It was years before the authorities knew that I was conducting various studies on prisoner volunteers. Things were simpler then. Informed consent was unheard of. No one asked me what I was doing. It was a wonderful time.”

Holmesburg wasn’t Kligman’s only playground— Kligman fed hormones to mentally disabled girls in two New Jersey institutions for the “feeble-minded” or “mentally deficient.” When some of them started to grow beards, authorities “quickly put an end to the experiments.”

Dr. Kligman was aided by several Jews, including Dr. Sigmund Weitzman, who once applied a chemical to a Black inmate’s scalp and his hair began falling out in clumps. Dr. William L. Epstein, who studied under Kligman, bragged that: “In a short period of time, I could see more [“patients”] than most people would see in their practice in their lifetime. It was very efficient.” His colleague, Dr. John Strauss, described experiments that were funded in part by the National Institutes of Health (the parent agency of National Institute of Allergy and Infectious Diseases, now run by Dr. Anthony Fauci) and the U.S. Army.

They used “deep punch biopsies,” in which a sharp cylinder, about a quarter-inch in diameter, is twisted into the skin, then lifted out. Dr. Milton Cahn and his brother Dr. Burt Cahn, a psychiatrist, admitted to testing “a host of anti-anxiety medications and tranquilizers…and a variety of sleeping pills” on the prisoners. Cahn partnered with another Jewish doctor named Edwin J. Levy, to form their own Philadelphia-based business called Research Testing Associates, Inc., which conducted the same types of human guinea pig experiments on inmates at Lancaster County Prison.

Albert Kligman’s house of medical horrors was finally ended by inmates who were members of the Nation of Islam—followers of the Most Honorable Elijah Muhammad. They were housed in D-block at Holmesburg and they were not cooperative when Kligman came to solicit human guinea pigs. They strongly urged their fellow inmates not to participate. One brother said: “We told the doctors ‘absolutely not’ because of our religious beliefs. We knew the white men were devils, and the tests were dangerous.” In fact, Dr. Burt Cahn cited the Nation of Islam in his decision to leave the prison: “I became concerned about the growth of the Muslim movement.”

It must be here emphasized that—just as with the better-known Tuskegee syphilis experiments—no government agency, no church or synagogue, no public or private organization, no politician, no medical society, none of the civil rights leadership or racial watchdog groups stopped these horrific Nazi experiments on American soil, in the place mockingly known as the “City of Brotherly Love.” Members of the Nation of Islam whilst prisoners themselves confronted these crimes against humanity, ultimately resulting in the forced shutdown of those experiments.

Even after the public exposure of their horrific crimes, Drs. Kligman, Cahn and Levy were honored faculty members at the University of Pennsylvania School of Medicine. Kligman faced no criminal or professional penalties for his depravity, and he even sat on the school’s “ethics committee.” And most horrific: “He trained over 60 international fellows, many of whom went on to chair departments and have successful research careers.”

Of his Holmesburg legacy, America’s Jewish Dr. Mengele said: “My view is that shutting the prison experiments down was a big mistake … I’m on the medical ethics committee at Penn and I still don’t see there having been anything wrong with what we were doing.” Kligman’s inability to discern right from wrong, good from evil, is remarkably similar to the callous sentiments expressed by another notorious Jewish doctor.

Dr. Sidney Olansky ran the Tuskegee syphilis experiments now roundly condemned as the very epitome of medical racism. President Bill Clinton issued an official apology saying, “what the United States government did was shameful … I am sorry that your federal government orchestrated a study so clearly racist.” But, like Kligman, Dr. Olansky did not agree. As many as 100 of the original 200 test subjects died as a direct or indirect result of the illness; 40 of their wives had been infected, and 19 of their children were born with congenital syphilis. Yet Olansky maintained that his Tuskegee atrocity “was well conducted.” The Black men, said Olansky, was informed of what was happening: “at least, it was explained to them; maybe they didn’t have sense enough to understand it, but it was explained to them … The thing that ruined it was the racial upheaval.”

These disgraceful episodes in Black–Jewish medical history (and many more unmentioned instances) have demonstrated the kind of evil that caused the Most Honorable Elijah Muhammad to declare: “As I live, my desire is to destroy the so-called medical profession, because it is not a profession of healing; it is a profession of drugs.”

(Tingba Muhammad is a citizen of the Nation of Islam. Visit the NOI Research Group online at www.noirg.org)