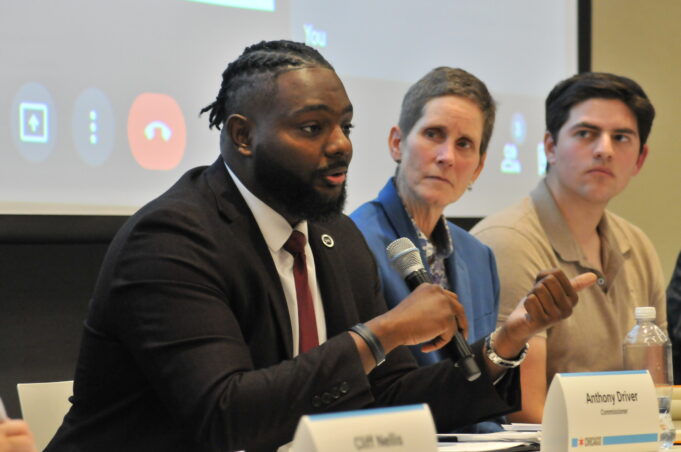 CHICAGO—Roughly 200 people recently packed the room for the inaugural meeting of the newly established, first-of-its-kind civilian police oversight and reformation board.

The Community Commission for Public Safety and Accountability (CCPSA) met at Malcolm X College on the Near West Side, to get started on the difficult work of establishing trust between underserved and exploited communities and the Chicago Police Department (CPD).

The meeting was attended by mostly members or supporters of the Empowering Communities for Public Safety (ECPS) coalition, which is composed of community, labor, and faith-based organizations working to hold police accountable and create safe neighborhoods across Chicago.

The coalition spearheaded the ordinance created where an appointed commission will decide CPD policy, establish public safety goals, and play an unprecedented, central role in selecting police leadership. Additionally, it established district councils in each of Chicago’s 22 police districts, where three elected residents will work to ensure public safety at the local level.

“We are here to recognize you and uplift you on a broad base of support that exists for you. We hope that you act with boldness in forging new practices, policies and protocols for the city of Chicago,” LaCreshia Birts, coordinator for the Grassroots Alliance on Public Accountability and member of the coalition, told the commission at the Sept. 29 meeting.

In July 2021, the Chicago City Council passed an ordinance creating the commission and the interim commission should have been appointed in January of 2022 and active in February, according to the coalition. But the commission was not appointed until the end of August 2022.

Many expressed their support for the commission and urged Mayor Lori Lightfoot and Chicago City Council to give the interim commission the support needed to improve the city’s public safety system and insisted that the commission must not be a shadow group doing the city’s bidding.

“We crossed rivers of blood to get this ordinance passed,” said Frank Chapman, executive director of the National Alliance Against Racist and Political Repression. “We didn’t do all this work—organizing and protesting—to have a lame duck commission, so we are demanding the mayor and city council to get off their ‘rusty dusties’ and give the commission the budget and staff it needs to do its work. We don’t need to be just citing crime statistics, we need to be citing police crime statistics.”

During the meeting, the commission introduced itself to the community, set up committees to do its work, and elected Anthony Driver and Oswaldo Gomez as its president and vice president.  Rev. Beth Brown, Cliff Nellis, Isaac Troncoso, Remel Terry and Yvette Loizon make up the remaining commission members.

The commissioners say they are committed to increasing accountability within the CPD. “This commission has a lot of work ahead of it,” said newly elected commission president Anthony Driver, “and we plan to be accountable to the community in all that we do.”

Now that the commission is activated, their first tasks include reviewing the proposed 2023 Chicago Police Department budget of $1.9 billion, investigating CPD policies, enacting alternatives to policing, and increasing outreach for the district council elections in February 2023. It’s important to note that the mayor, however, can veto any recommendations they make.

As for the district councils, they will be elected in February 2023 alongside the mayoral race in each police district and work to improve policing and public safety in the district. They will be the “boots on the ground” helping ensure the community’s voice gets to the commission.

Specifically, district councils will bring police officers and Chicago residents together to plan, prioritize, and build mutual trust, strengthen the police accountability system, and give Chicagoans a meaningful new role in oversight. Additionally, they will explore and advance alternative effective approaches to public safety, explains the city’s website.

Now that the ordinance is passed and the commission is established, the work must be done to inform the public and encourage community involvement in this powerful new system for police accountability, Ms. Birts asserts. The coalition is providing support to candidates running for district councils in the 2023 municipal elections.

One candidate for the District Council is Marquinn McDonald, a Chicago resident who has extensive experience in martial arts and executive security. He has also conducted police self-defense training and has organized a community watch initiative focused on thwarting the rise in car jackings.

“This work has been happening since Fred Hampton Sr., and then Harold Washington tried to get it going,” he said, referring to the late Illinois Black Panther Party leader and first Black mayor of the city.

“This work has literally been built on blood and we have to take it seriously,” said Mr. McDonald. “It’s about creating a better system. We have to dismantle this system and rebuild a better system. One that’s actually going to serve the community.”

An example of the commission’s powers includes when there is an opening for police superintendent or a member of the Police Board, the commission will submit a list of candidates that the mayor must choose from. The mayor must request a new list if none on the list are acceptable. Once the mayor makes a selection, the city council will vote whether to confirm.

The mayor maintains sole authority to remove the police superintendent and Police Board members, but if the commission believes that one of those officials is not fit to do the job, the commission can hold hearings and take a vote of “no confidence.” That would trigger a city council hearing and vote and a public response from the mayor.

The commission will select the Civilian Office of Police Accountability (COPA) chief administrator, subject to city council confirmation. The commission, with city council approval, can also remove the COPA chief for cause.

Police misconduct hurts the entire city. Along with emotional, physical and financial pain and suffering to the victims, the devastating effects of police misconduct financially hurts every resident. In 2020, Chicago taxpayers coughed up more than $40 million for plaintiffs and their attorneys who alleged misconduct against the Chicago Police Department, according to a report published by the city’s law department earlier this year.