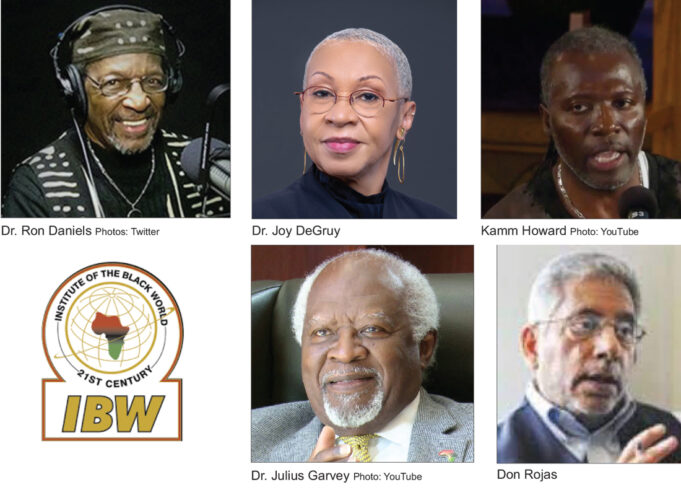 The 467-year cry for justice, and the subsequent movements calling for reparations over the forced transfer of Black people to the Western Hemisphere, for the purpose of enslavement between the mid-16th to late 19th centuries, has long been the substance of mixed feelings among descendants. Many descendants doubt the likelihood of real justice. Controversy continues among both the political and economic beneficiaries of one of the world’s most horrifying and longest-lasting crimes against humanity—the Trans-Atlantic Slave Trade and its legacy.

“Today, we will be talking about an update on the global reparations movement,” said Dr. Ron Daniels, president of the Institute of the Black World 21st Century and distinguished lecturer emeritus of York College at City University of New York (CUNY), broadcast live over New York’s WBAI 99.5 FM, the Pacifica Network, and Vantage Point Radio. Dr. Daniels also hosted the August 29 panel discussion. “This conversation about reparations, which is exploding throughout the world, is one that you do not want to miss,” he insisted.

Centuries of racially based servitude in the Americas included the unique characteristics and impact of chattel enslavement upon several generations of Black people in the United States. The effect of genocide upon an entire people, their cultures, the lost identities of tens of millions of Black people, known and unknown martyrs, historical icons, and activists of the Black struggle, endured centuries of hostility, imprisonment, torture and even death. They suffered not only for boldly speaking out against the sins of Judeo-Christian Europeans in the so-called New World, but also for demanding repair from the deliberate harms perpetrated against untold millions of Black people that continue to this day.

Speaking of the growth, relevance, and respect for the reparations movement in the United States as of 2022, Kamm Howard, formerly a co-chair with N’COBRA (National Coalition of Blacks for Reparations in America) and now director of Reparations United, in Chicago, told the listening audience that his organization views the tremendous energy for reparations in the U.S., particularly at local and state levels, as both encouraging and as a sign that organizing around the subject of reparations can no longer be dismissed as a fringe movement.

“There are many injuries that we share across this country, in various cities, we’re dealing with the same issues of injury,” Mr. Howard explained to the audience when questioned about the veracity of repairing harms on the local and state levels. “In addition, we look at how we can fund local reparations, particularly looking at the institutions and corporations that exist in some of our communities, around the country, that have engaged in some of the complicit harms against our people and create a mechanism where we can all go, collectively, after some of these resources.”

There has been a somewhat mainstreaming of the overall reparations movement as a new and coordinated global reality. Interested parties from heads of state, diplomats, and scholars, activists, artists, and members of civil society, agreed to work together after the John D. and Catherine T. MacArthur Foundation selected 23 groups, as part of its Equitable Recovery Grant Initiative. The goal of the initiative is to help develop strategies to amplify the legitimacy of reparations work, and to take the concept of repair and healing to the wider international community.

According to the Ghanian news outlet, CITI Newsroom, the newly formed “Global Circle for Reparations and Healing” identified areas with which these groups collaborated to develop a consensus, resulting in three major conferences:

A convening in Italy at which experts from around the world deepened their understanding of the role of the Global North in the Trans-Atlantic Slave Trade and its legacies of colonialism, neocolonialism, racism, apartheid, genocide, and plunder.

A subsequent meeting with the Vatican on the issue of accountability for its role in initiating and facilitating the Trans-Atlantic Slave Trade.

“On all three goals, the Global Circle met and even exceeded critical objectives,” the Ghana-based CITI Newsroom reported. “The cohort held a convening with participants from around the world in Bellagio, Italy, at the Rockefeller Foundation Bellagio Center upon the invitation of Howard University Knight Journalism Professor and creator of the 1619 Project, Nikole Hannah-Jones. That convening produced 15 commitments to which attendees agreed will serve as the basis for global collective strategy development,” the news story said.

Stating that the 1619 Project author was also instrumental in bringing other MacArthur grant recipients to the Italian conference, and a variety of others, including funders, Mr. Howard added that allies aiding in the efforts of global reparations and racial healing assembled in Bellagio to move the subject of reparations forward. They also discussed issues surrounding H.R. 40, a House Resolution initially drafted by the late U.S. Representative John Conyers (D-Mich.) in 1989 and introduced to the House Judiciary Committee as the “Commission to Study and Develop Reparation Proposals for African Americans Act” by Rep. Sheila Jackson Lee (D-Texas) in 2021.

But can today’s Black leaders and organizations withstand the pressure of external agendas, and the hidden hands of outside interests on their progress, or will White influence over Black organizations prevail as it has in the past?

“We determined we would create a unified framework in which to develop a demand in reparations, not only here in America, but as we move forward. We looked at how the African nations, who were complicit in some of the selling of Africans, how we would frame that discussion, one around bringing us all closer together in unity as opposed to blaming one group or another,” Mr. Howard continued. “We looked at how we would deal with these international entities like the IMF (International Monetary Fund) and the World Bank and other institutions that have continued these crimes with the systematic injuries that we suffer from in this country (and) we looked at how we can better move the discussion, here in America, around H.R. 40.”

Additional issues raised included publicity and outreach, foreign and domestic policy, the growth and momentum of the global reparations movement throughout the Caribbean, including the impact of colonial and neo-colonial policies upon indigenous people, and the recent election of the first Black woman to the vice-presidency in Colombia, South America.

To hear the replay of Dr. Ron Daniels’ August 29 panel discussion, “The State of the Global Reparations Movement,” visit https://wbai.org/archive/