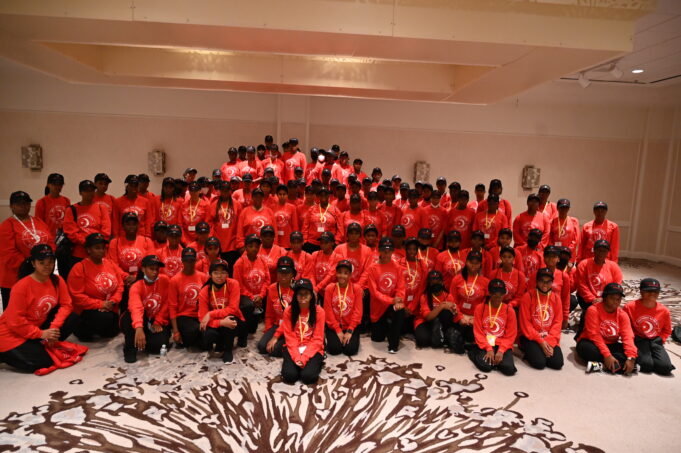 [Editor’s Note: The high spirit and positive energy is still reverberating around the Nation of Islam in the aftermath of the National M.G.T. Vanguard Retreat that took place the weekend of September 15-18 in the Chicago area. “M.G.T. and G.C.C.” means Muslim Girls Training and General Civilization Class, the women and girls of the Nation of Islam. The M.G.T. Vanguard are the warrior class consisting of girls and women ages 16-35.

The weekend consisted of training workshops in areas such as sewing and cooking, martial arts and physical training, a fashion show, a special message delivered by the Honorable Minister Louis Farrakhan and a special Sunday meeting at Mosque Maryam featuring female students in the ministry. The Final Call presents additional photos and reactions from this wonderful weekend. The interviews were conducted by: Charlene Muhammad, Anisah Muhammad, Shawntell Muhammad, and Abisayo Muhammad.]

“The Vanguard Retreat has been such a refreshing moment because for the past 35 years, I have been participating in National Vanguard Retreats and this reminded me of some of my earlier years of participating as a teenager in the Nation of Islam and those moments have left an indelible mark on my life forever. This one was especially special because I have my 15-year-old daughter with me. So, not only was I able to have great reminiscing moments of my previous Vanguard years, but I was able to actually share this one with my daughter. So, this has been wonderful.”

“One of the best parts of tonight (Modest Fashion Show) was seeing all of the beautiful sisters out in their lovely garments, representing Allah (God) to the finest and how we carry ourselves!”

“My favorite part of the Vanguard Retreat 2022 has been just taking my time doing Godly things with my sisters, getting to know sisters and being inspired by all of the modest fashions and fun activities.”

“I am a new M.G.T. and I’ve been invited to this lovely event by our Student Eastern Regional M.G.T. Captain Johnna Muhammad, and I’ve had the time of my life. I’m really grateful for the sisters and I’m grateful to be a part of the Nation of Islam. I had a really good time. The words of the Honorable Minister Louis Farrakhan made me feel like I have been able to finally get closer to God. It gave me the feeling of being reborn, and also about my status and work as a woman.”

“I am honored to share this experience with my daughter. As strong of a pull as this world has on our young people especially our young girls and young women, I’m just so grateful to Allah (God) to be able to share this experience with my daughter who is standing strong as a mighty Vanguard and loving her Nation, loving her Minister, loving Allah. … So it’s just really heartfelt and heartwarming to me and I thank Sister Captain Naeemah Muhammad, I thank the Minister, I thank all of the sisters who worked so hard to put this together. It was just an absolute blessing.”

“This was my first Vanguard Retreat. It was amazing. I’m thankful that I was able to bring my baby daughter with me, and I’m happy that she was able to experience the retreat even though she may not have understood everything that was going on, just the fact that she was there. Every part of the retreat was uplifting; reminding and encouraging for me to continue striving to be a righteous Muslim.”

“This was my first Vanguard Retreat, and it was phenomenal. It felt really good being among the sisterhood and being around unconditional love. I was able to attend all the workshops and they were all based on spirituality, and your connection with Allah (God) to develop your skill. … The team-building activities allowed us to develop bonds with other sisters. I met so many sisters from around the Nation of Islam.”

“The 2022 National M.G.T. Vanguard Retreat has been an incredible experience. It has been so informative, and it takes everything I thought I knew to another level. My number one highlight of the weekend was hearing the words of God through the Honorable Minister Louis Farrakhan.
Another highlight for me was really learning in-depth about the physical, mental and spiritual components of our Military Drill.
I also really enjoyed the classes about our seven units of being M.G.T. and G.C.C. I enjoyed all of the information given and even the back-to-back arrangement of the classes.

Thank you to the Honorable Minister Louis Farrakhan, and Student National M.G.T. Captain Naeemah Muhammad and her staff for putting together such an amazing event.”