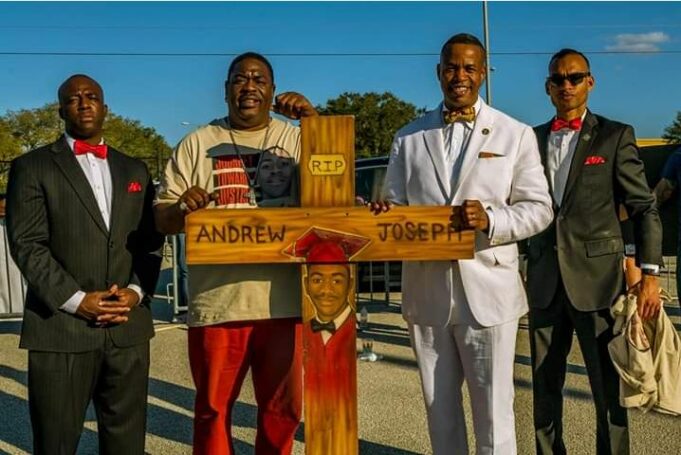 After eight years of fighting for justice, the family of Andrew Joseph III finally received some measure of closure. A jury awarded them a $15 million settlement in recognition of the wrongful death of their son at the hands of Florida’s Hillsborough County Sheriff’s Office (HCSO).

It is a moment that has been a long time coming for the Josephs, who have bravely fought for accountability on behalf of their son over the years.

They emerged from the courthouse to a chorus of cheers and applause after the September 22 settlement. Amid their grief, it was a moment of joy. A reminder that “Pee Wee,” as their son was affectionately called, was vindicated at last after his tragic death on February 7, 2014.

“Our decision to bring Andrew into the world was an answer to a prayer, a promise. Then to see all of that abruptly end due to a preventable act involving an innocent child attending a school-sponsored event. The damage this caused devastated us. Multiple levels of trauma and PTSD (post-traumatic stress disorder) have engulfed our lives,” Ms. Joseph told The Final Call.

Young Andrew’s parents, Andrew Joseph Jr. and Deanna Joseph, recently conducted an exclusive phone interview with The Final Call. Following their son’s tragic death, they described what their family has endured, the verdict and how they remained determined to seek some sort of justice.

Andrew Joseph III’s death was a tragic and unnecessary loss of life. What was supposed to be an evening of fun for the 14 year old at the Florida State Fair in Tampa turned into a nightmare.

Reportedly, shortly after nightfall, February 7, 2014, a large number of people at the Florida State Fair became unruly. Several youths were detained by Hillsborough Sheriff’s deputies, including some of Andrew III friends. He went over to the area to check on his friends and was subsequently taken to a detention area, unlawfully detained by HCSO, put in an HCSO van, and ejected from the fair.

A deputy left the boys to fend for themselves in the dark as it started raining. They were then reportedly given erroneous information by another HCSO officer that they needed to cross an interstate highway to find their ride. Upon seeing this information as wrong, Andrew III and his friend attempted to cross the dangerous interstate a second time when an SUV fatally struck him. The lack of care and responsibility exhibited by the HCSO officers resulted in a preventable tragedy, and Andrew’s family is left to grapple with an unthinkable loss.

“My dad was Andrew Joseph Senior, and I was Andrew Joseph Junior. So, it was a DNA type of thing for me. You know, they stole my DNA. We spent so much time and energy instilling positive morals and deeds in this child. But, that next seed, that next generation, will never exist,” said Mr. Joseph.

The Josephs said the support of their community has been a source of strength for them during this difficult time, and they are grateful for all the kind words and gestures. While nothing can bring back their son, they take comfort in knowing they are not alone in their sorrow. And they find hope in the knowledge that, through shared grief, they can help others who have also lost someone dear to them at the hands of law enforcement.

Andrew III went to St. Stephen’s Catholic school. He was very popular amongst his classmates, was an honor student and sports star.

“In this case, the outcome was more significant than the verdict. It was just a matter of restoring honor to my son’s name that had to be done. They portrayed him as a wilding gang member at the fair. He is now regarded as a symbol of justice worldwide,” added Mr. Joseph.

“It was never about money. It was always about my son’s image and his issue. There is some light. We’ve now laid out a blueprint for other families to follow. We’re focusing on qualified immunity, which is difficult to deal with. The sheriff’s department and most state authorities have denied families justice for so long. We had to fight for eight and a half years because the police, the Sheriff, was able to hide behind qualified immunity,” he said.

Mr. Joseph reports that the Florida State Fair now operates under the “Andrew Joseph Safety Plan.” When children are detained, their parents are notified. Instead of Student Day, it is now Family Day, and parents must accompany children after 5:00 p.m. Additionally, tickets are distributed with more control.

The Josephs are continuing advocacy work in their son’s name.

“The Andrew Joseph Foundation is our lead organization, where Mr. Joseph and I are both co-founders,” explained Mrs. Joseph. The foundation focuses on children’s safety first. It is common sense to allow parents to intervene in matters concerning their children when they are in trouble, which is an initiative through the foundation.

“Families dealing with police brutality had no support. We now have a support group in Tampa that meets on the third Sunday of every month. It helps families to talk about traumas and to work on their narratives,” said Mrs. Joseph. She explained that this also allows them to engage in advocacy and empowerment for various cases involving young people.

On October 10, 2015, the Honorable Minister Louis Farrakhan of the Nation of Islam delivered an historic address on the Washington, D.C. Mall entitled “Justice or Else.” The message was a powerful call to action and one that the Joseph family said they embraced.