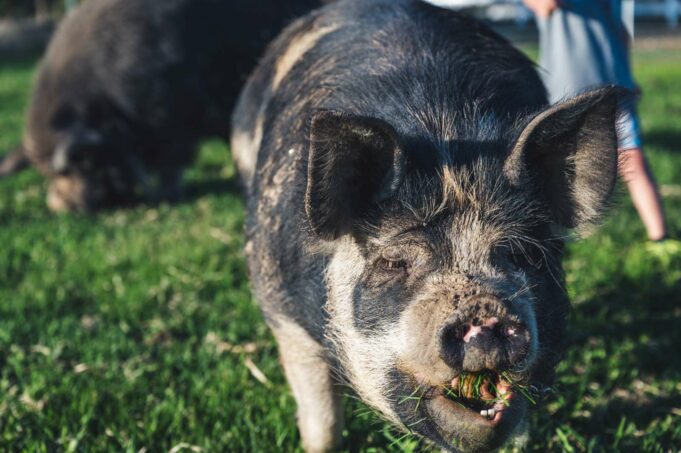 The safest way of all to eat, is to stop eating so often (three meals a day and meals between those three meals). In the past, our appetites were as the appetites of swine. The swine has no certain time to eat. It will eat until it is sick and has to lay down, but as soon as it finds a vacancy in its stomach, it eats more food. It doesn’t matter what kind of food it may be; the swine eats anything. The swine’s life is very short, because it comes here eating itself to death and death soon takes it away.

WE EAT TOO much too often, and we eat the wrong foods (poison foods). Most of our drinks are poison.

Allah has blessed America with the best of foods and with good water that is plentiful. America has been blessed with everything that she could desire, but after all of these blessings, she is ungrateful and turns good things into bad, and wages a war against the God of good and His People.

After telling the slaves they were free, America kept them here in order to prey upon them. Now today, many of the slaves wish to be free of America, but her reply by her actions to our wanting to be free is “no.” And America continues to give the so-called Negroes the same bad food and drink that her (America’s) fathers did in the days of servitude slavery.

Americans have poison whiskey and wine by the barrels and vats all over the country, yet when this does not make them intoxicated (drunk) and crazy enough, they resort to drugs (the poison weeds).

ALLAH HAS blessed them with so much bread that they set whole fields of good wheat on fire. They burn up the wheat in order to obtain higher prices for it. They are crazy over money and wealth.

ALL OF these plagues are falling upon America because she is against God giving freedom, justice and equality to the so-called Negroes, whose labor she has had for 400 years. Because of America’s having broken the Divine Law which prohibits eating swine flesh, and because of her having fed this forbidden meat to her slaves and to other nations of the earth, Allah (God), is now taking His blessings away from her.