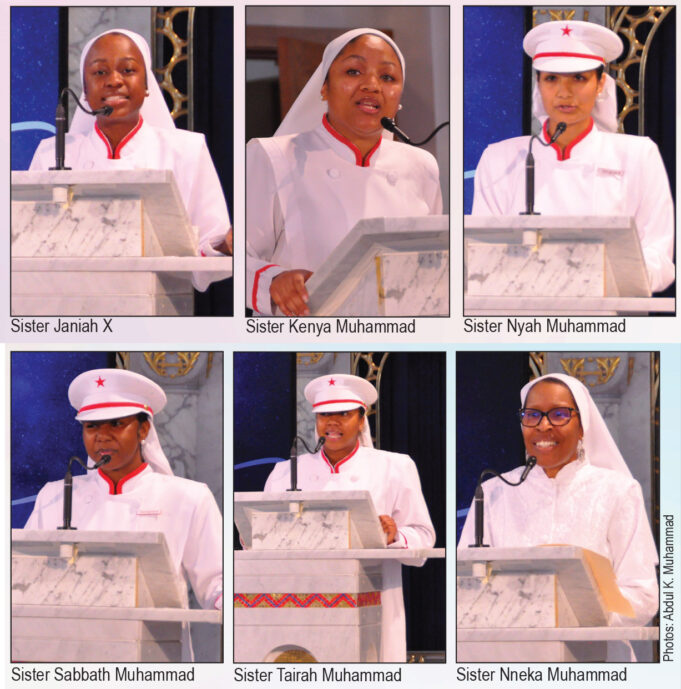 CHICAGO—The seats of Mosque Maryam at The National Center of the Nation of Islam, were filled from front to back with M.G.T. and G.C.C. Vanguard, the warrior unit of the Nation made up of girls and women ages 16-35.

That day, the feminine side of the Nation of Islam mounted the rostrum of Mosque Maryam. The program’s lineup, comprised of M.G.T. Vanguard, included Sister Kenya Muhammad, Sister Nyah Muhammad and Sister Tairah Muhammad, all from Chicago, Sister Sabbath Muhammad from Atlanta and Sister Janiah X from Miami.

“It is our honor and pleasure to introduce to the world today the women of Islam,” said Student Minister Ishmael Muhammad, National Assistant to the Honorable Minister Louis Farrakhan.

Young women and girls traveled near and far to the Vanguard Retreat that took place at The Westin O’Hare in Rosemont, Illinois.

The September 18 program was the culmination of the 2022 Vanguard Retreat. The M.G.T. Vanguard and Jr. Vanguard participated in a weekend of workouts, martial arts, close order drill, workshops and sisterhood.

The feminine expression of Islam

Sister Kenya Muhammad electrified the mosque, wishing believers and guests a happy Saviours’ Day. She noted that the theme of the Vanguard Retreat was “The Virtuous M.G.T. and G.C.C. Vanguard.”  She described the retreat as an opportunity for the young women of the Nation to rejuvenate themselves. “I know that I am not the only one who absolutely felt the Saviours’ Day spirit this weekend,” she said.

Sister Kenya Muhammad presented to the audience the seven training units Allah in Person, the Great Mahdi Master Fard Muhammad gave to the M.G.T. and G.C.C.: how to keep house, how to rear children, how to take care of their husbands, sewing, cooking, and how to act at home and abroad.

Sister Nyah Muhammad spoke on virtue and chastity. She quoted words from the Honorable Minister Louis Farrakhan. “You don’t have to be ugly and covered. You can be beautiful and covered,” she said.

She also echoed words from Minister Farrakhan that if a man tries to take from a woman what she does not which to give, “kill him.”

“We will die before we let you take what only belongs to God,” she added.

“Do we know that the science of food has a very pertinent effect on the human body?” she asked the audience.

She quoted the Honorable Elijah Muhammad stating, “Eating the proper food that has been given to us and taught to us by our Lord and Saviour Master Fard Muhammad to Whom all praise is due forever changes us in many ways.”

She continued, “Not only does it give us good health, but it gives us a better way of thinking. As food and our mental power work in the same way, whatever affects one affects the other. Eating the proper food also brings about a better surface appearance.”

Sister Janiah X expressed to the audience: “The Nation of Islam is a Nation based on truth, and the truth is Black woman, that God has come for you. And the only way women can be acquainted with their real and supreme value is not by listening to what this world thinks of her but by learning and accepting what God thinks of her.”

She referenced Minister Farrakhan’s special Mother’s Day message delivered in 2009, titled, “The Immeasurable, Limitless Value and Beauty of a Woman.”

The Minister is “reversing Satan’s hold on the Black woman,” said Sister Janiah X. “He is breaking the chains that have shackled her for so long, which had her convinced that she is less than nothing. But look at the women in the audience! This is a result of the love of God!”

Sister Tairah Muhammad shared the definition of “Vanguard” and the origin of the Vanguard class, set up directly by the Honorable Elijah Muhammad.

“God gave us the training units in order for us to function properly in the class of God. He came to refine us. He came to dignify us. He came to sit us on top of civilization and to tell us that we are too valuable to allow a man to use and abuse us,” she said. “And out of that class, the Most Honorable Elijah Muhammad set up a specific role for the young women of the M.G.T., the Vanguard class. He gave the Vanguard a distinct function.”

That function, she described, is to be the warriors of the women and girls by first submitting to the Greatest Warrior to exist, God Himself; and then by learning martial arts, close order drill and military training.

Sister Nneka Muhammad graced the rostrum with a standing ovation. She exuded the unstoppable love produced by God through Minister Farrakhan.

“I don’t care what you do. You can try to take our life. You can come for us. We will fight with every fiber of our being,” she expressed. “Oh yes, we will. Oh yes, we will. We will even fight you with the power of our womb and produce children that will destroy all of God’s enemies!” she said to thunderous applause and excited cheers from the audience.

Originally, Sister Minister Dr. Ava Muhammad was scheduled to be the keynote speaker at Mosque Maryam on Sunday, September 18. Allah (God) took her life before the M.G.T. Vanguard Retreat came into fruition. Her spirit and presence was felt by attendees throughout the weekend.

“But as you can see in the spirit of these beautiful young women, much of what was said today is inspired by her work to spread this beautiful teaching as taught by the Honorable Minister Louis Farrakhan,” Sister Nneka Muhammad stated. “As we are taught, the righteous are not bound by the grave. The Honorable Minister Louis Farrakhan called her a star of God, and when you look at the nature of stars, even after they are considered dead, their light continues to be seen shining brightly. Its magnificent light continues to travel, piercing through the darkness.”

“The truth and the wisdom that Sister Ava shared with us of the Teachings of the Most Honorable Elijah Muhammad as taught by the Honorable Minister Louis Farrakhan is a light that will never and can never be put out,” she continued. “It continues to shine, illuminating the minds and warming the hearts of all who encounter it. And so on this day, we thought it only fitting that we dedicate this very special moment in time in honor of her life and her work as a mighty, brilliant, powerful woman of God who personified what it means to be Vanguard.”

Sister Nneka Muhammad shared words on Jesus’ work in healing, redeeming and uplifting women, including how Jesus taught women right along with the rabbis, responded to the cries of women and chose women to be the first to proclaim that he lives. She described the life of Sister Ava Muhammad as a shining example of the power of the work of Jesus through Minister Farrakhan to elevate the woman.

“She was living proof of the real power of the Teachings of the Most Honorable Elijah Muhammad as taught by the Honorable Minister Louis Farrakhan to empower the woman to rise as high as her God-given talents will take her,” Sister Nneka Muhammad said.

“As Jesus commissioned the women that he healed to share the good word with others, Sister Ava Muhammad did not keep it to herself. Good God Almighty. She was so bold, so courageous in her love that she proclaimed it before the entire world,” Sister Nneka shared.

In helping Minister Farrakhan, Sister Ava wrote books, traveled the country and world giving lecture after lecture, spoke weekly on her radio show “Elevated Places” and led the Nation of Islam’s Friday night study group, among many other deeds.

After Sister Nneka Muhammad’s words, a video presentation on the life and work of Sister Ava Muhammad was shown. Southern Regional M.G.T. and G.C.C. Captain Nusaybah Muhammad led the Vanguard and audience in a final salute to Sister Minister Dr. Ava Muhammad.

“The tribute alone was tear-jerking,” described Sister Sakinah Muhammad out of Jacksonville, Florida. She said the Sunday program and the retreat reignited her flame as a Vanguard, as a M.G.T. and as a believer.

Sister Khadijah Muhammad’s warrior spirit was on a high throughout the entirety of the tribute. “This is a woman who changed my life and opened my eyes to the reality of where we are in real time, as far as separating from our enemies into our own states,” the young mother from Atlanta shared.

“Throughout the tribute, I had chills and kept reminding myself that continuing her works in separation and defending our Messiah and Christ is part of my mission as well,” she said. “As a Vanguard, a soldier for Muhammad and Islam, I feel I am obligated to continue her works, and I pray that Allah helps me to do just that.”