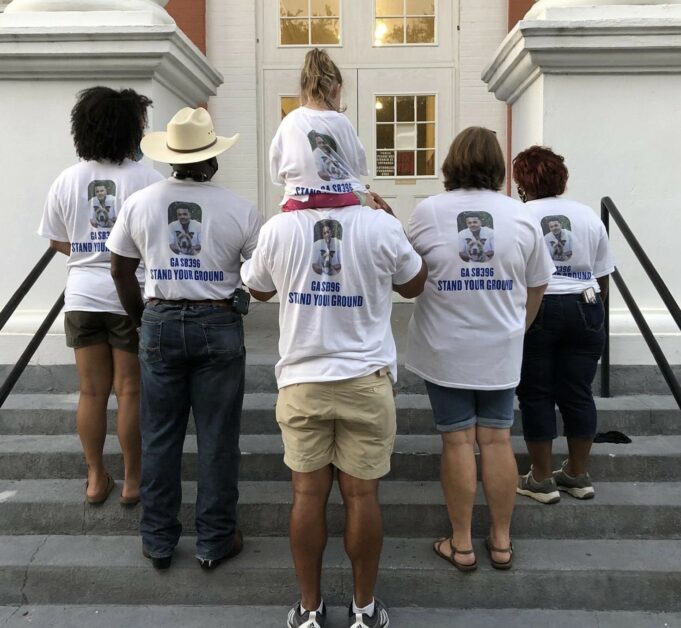 Deron “Pat” Wilson, father of 23-year-old Marc Wilson, who is Black, described his son as a young man who has a lot of love and passion for his family, his friends and people he has never met. He uplifts people in trouble, and he mentors those younger than him.

“Even at home, he always has a smile,” said Mr. Wilson to The Final Call via an exclusive Zoom interview. But throughout the past two years, he has not seen as many smiles on his son’s face.

“When you take someone who’s good and you put them in a cage and then you tell them they’re worthless, and you kind of hear that day after day for his first two years sitting in a jail cell, almost two years in Bulloch County,” he expressed.

Marc sees the sunshine in things, his father said, but that’s what worries him, because there is no sunshine where he is headed. Marc was sentenced to 10 years in prison for involuntary manslaughter.

His parents described bits and pieces of Marc’s childhood. To them, who they know Marc to be does not add up to what prosecutors painted him as during his trial and his Sept. 20 sentencing hearing, where he was labeled a “threat” to the community by Ogeechee Circuit Superior Court Judge Michael Muldrew.

“He was best friends with the kids that were the underdogs,” his mother, Amanda “Mandy” Wilson, who is White, said. He befriended those with autism and had the ability to help calm them down during school. He would protect them.

“And that’s Marc, a protector,” Ms. Wilson said. “He is a protector. That night, what happened that night, it was no shock at all that Marc was truly, … he was protecting Emma, because that’s who he is.”

Mr. Wilson is deputy fire chief for the city of South Fulton, and Ms. Wilson is a 5th grade teacher at Hogansville Elementary School. For 682 days, they did not have their son with them. He was in pre-trial detention. During that time, they made phone calls, did video calls and planned rallies, among other things. Because they were staying so busy, the emotions had not yet set in.

“For me, the emotions didn’t truly hit until we went to trial. That’s when it really all started coming for me,” Ms. Wilson said. The seven-day trial was held in late August.

Before Marc was found guilty, his family believed in the justice system, and they believed justice would prevail.

“We believed in stand your ground,” Ms. Wilson said. “We just believed that people have the right to protect themselves if they feel their life being threatened and stuff. And when Marc initially told me what happened, he truly feared for his life.”

Marc’s family and attorneys maintain the young man stood his ground on the night 17-year-old Haley Hutcheson was killed. Ms. Hutcheson was one of the passengers in a pickup truck composed of majority White male teenagers. Marc’s parents wholeheartedly believe that three of the teenagers were attempting to kill their son by attacking him and running him off the road.

“They thought that the girl, Emma, was their classmate, Mary Jane, and she was with a Black guy. And that’s who they were messing with,” Ms. Wilson said, referring to Emma Rigdon, Marc’s girlfriend at the time of the incident.

If they were successful at running Marc and Emma off the road, Mr. Wilson said it would be a different story due to the road leading to a 30-foot downhill run into the trees.

“What would have happened is, Mandy and I and Emma’s parents would have been having a funeral or at least still sitting, wondering, are they going to live? Or will they be going through rehab right now, if they did survive, because of their injuries?” Mr. Wilson questioned. “I’ve been in the public safety business a long time, and accidents where you run off the road at 56 miles per hour and hit a tree head on usually don’t end well.”

Mr. Wilson argues that law enforcement was willing to lie and that attorneys were willing to cover up the facts. He said the boys already had a history of multiple arrests for driving people off the road, shooting at cars and beating and harassing people.

“When you call somebody the N-word, ‘I’m gonna kill you,’ that’s a threat,” he said.

Marc’s parents also believe that if the individuals in the truck were Black and Marc was White, the Black men would have been jailed immediately.

“If I were to use my weapon to defend my wife’s life and my life, I know right now, I feel wholeheartedly that I will be arrested and I will be charged if someone was trying to take my wife’s life,” Mr. Wilson said.

The determined parents said they are going to keep fighting until Marc is not only free, but also exonerated. The legal team has filed a motion for retrial, which they and the family expect the judge to deny.

Marc was originally charged with felony murder, which is a life sentence if found guilty, five counts of aggravated assault and possession of a weapon in the commission of a felony.

“He was found innocent, not guilty, on all seven of the indicted charges. The lesser charges were brought in at the last minute by a prosecutor who knew they lost their case, because they had no case,” Mr. Wilson argues.

After the expected denial for retrial, the appeals process will begin. It could take six months to a year until the case makes it to court. The legal team plans to bring on special attorneys. After Marc is free and exonerated, Ms. Wilson said the family will continue to expose injustices in their area and continue to work with organizations that fight for justice for others.

“The sad part is that Marc is going to have to be punished for something he didn’t do while we’re fighting and while we’re trying to get him exonerated and get him home,” Ms. Wilson said.