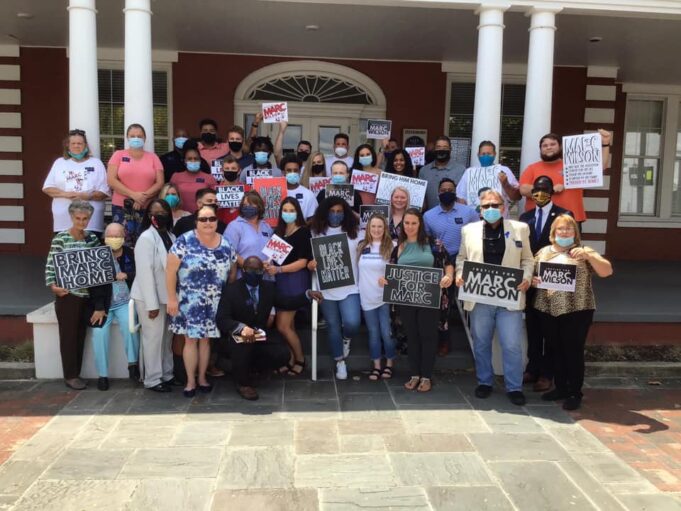 America’s criminal justice system is once again under the microscope for its controversial application of what is referred to as the “Stand Your Ground” law. This time, the case centers on the recent September 21 conviction of William “Marc” Wilson. It has been a two-year ordeal.

The summer of 2020 saw protests erupt in the United States of America and all over the world following the killing of George Floyd at the hands of police in Minneapolis. Ahmaud Arbery had just been shot and killed a few months prior, in Brunswick, Georgia, after being called racial slurs and being chased in a pickup truck by three White men and subsequently shot and killed.

So, when a group of White individuals on a highway near Statesboro, Georgia, allegedly hurled racial slurs out of a four-door pickup truck that reportedly swerved at the car he was driving several times in the early morning of June 14, 2020, William “Marc” Wilson, who said he feared for his life, fired several shots from his legal handgun, killing one of the occupants in the truck.

According to Mr. Wilson’s defense team, he fired at the truck while at the wheel of his Ford Fusion because he feared for his life and that of his girlfriend, Emily Rigdon, who was in the passenger seat, reported several news outlets.

The now 23-year-old biracial Black man has been convicted for involuntary manslaughter in the shooting death of 17-year-old Haley Hutcheson. He was sentenced to 10 years in prison, the maximum time allowed under Georgia law.

His case once again raises the discussion about the racial disparities and double standards of stand your ground laws and the right to self-defense.

A flawed and failed legal process

“The entire legal process has failed,” said Reverend James “Major” Woodall, a public policy associate at the Southern Center for Human Rights, to The Final Call.

The law states: “A person who uses threats or force relating to the use of force in defense of self, others, habitation, or other property has no duty to retreat and has the right to stand his or her ground and use force, including deadly force.”

Mr. Wilson’s attorneys maintain that three teenagers in the truck shouted racial slurs at Mr. Wilson and swerved into his lane.

After a seven-day trial in August in Bulloch County Superior Court, Mr. Wilson was found guilty of felony-level involuntary manslaughter, which carries a penalty of one to 10 years. He was acquitted on other charges, including felony murder, which could have resulted in life in prison.

The young man’s former girlfriend, Emma Rigdon, who is White, was a passenger in the car during the incident. She testified, “I would like you to remember that Marc Wilson saved my life that night. I truly believe that if he didn’t do what he did, we would’ve both lost our lives that night. Marc is not the reason Haley is not here.”

Attorney Francys Johnson, Mr. Wilson’s lead attorney, asked Judge Ronnie Thompson, who presided over the case, to consider sentencing the young man under first offender or as a misdemeanor. But the prosecution asked for the maximum of 10 years because of Mr. Wilson’s “lack of remorse, his disdain, his attempts to manipulate the system.”

“It’s a travesty of justice,” said Houston-based attorney Pamela Muhammad to The Final Call. “It looks like a young man was totally denied his right to his claim of self-defense.”

She referenced words the Honorable Minister Louis Farrakhan of the Nation of Islam  delivered in a lecture titled, “Justifiable Homicide: Black Youth in Peril.”

“There is no law on the books that White Supremacists feel they need to respect, particularly if that law would lead to our acquisition of strength or power to remove an impediment to our pathway of success,” Minister Farrakhan said.

“He was not allowed to really apply and get the benefit of a law that’s on the books in Georgia regarding stand your ground. As a Black man, he was denied the right to use the law to protect himself,” Atty. Muhammad argued.

The teenagers in the case admitted to being intoxicated, though they were underage. One of the young men from the truck, 20-year-old Luke Conley, who was 18 at the time, was charged with misdemeanor obstruction for withholding information.

Ogeechee Circuit Superior Court Judge Michael Muldrew originally presided over the case. He was recused by order of a senior judge for “disparate handling” of witnesses and other issues. Mr. Wilson’s defense claimed the judge met with the prosecution in private to review a notebook with emails Mr. Wilson sent to his family. The judge also had Mr. Johnson, Mr. Wilson’s lead attorney, taken from the courtroom and held in custody on a contempt of court allegation.

Atty. Muhammad noted that Mr. Wilson was prevented from getting a fair trial. “His right to counsel was severely impaired when his lawyer got arrested during the hearing,” she said.

She stated Mr. Wilson’s lawyers rightfully objected to the notebook, because it meant the prosecution was participating in ex parte communications.

“You have to share everything with the judge (and) the other lawyer,” she said. “When that lawyer objected to that, he wanted to take that document and make sure that it got entered into the court properly for the record, so later on, they could discuss it. And this is what he was potentially arrested for, because he wanted to actually follow the court procedure and give it to the transcriber so she could put it in the record?” she questioned.

“If the court itself and the legal process cannot be considered to be legitimate operations of the state, and there is minimal or no existing confidence that those individuals in those offices are able to truly promote justice by disclosure of the full truth, then it really begs the question of if America can be who she says she is, who she says she has been and who she says she shall ultimately be,” he said.

He explained the other options the judge could have taken, such as sentencing the offense as a misdemeanor or giving a lesser sentence.

“And there’s an ability for him to probate some of the sentence, which means he serves one part of it and the rest will be served on probation,” Rev. Woodall said.

He also said the judge had the discretion to sentence Mr. Wilson under the first offender act, which would have removed the offense from the young man’s record after he completed his sentence.

“The final thing that is the most outraging is the fact that if you think about ranges of sentencing, the maximum punishment available under the law is usually reserved for individuals who are the most heinous of heinous, most violent of violent, and Marc Wilson has never been convicted of a crime, has never been accused of a crime, has never been even cited for a crime up until this point,” continued Rev. Woodall. “And so therefore, Marc did not deserve, under the eyes of the law, the extreme, the harsh sentencing that was experienced.” The Final Call reached out to the legal representatives of Mr. Wilson but received no response by presstime.

Georgia is one of over 30 states that has implemented a stand your ground law. Multiple studies have found that the laws solely benefit White Americans, White men in particular, especially in the South.

“Stand your ground laws are not equitably applied as a defense. White men are more likely to successfully invoke the use of stand your ground laws for their defense after a shooting than Black Americans or women, especially Black women,” said a March 2021 report by the Coalition to Stop Gun Violence, titled, “Stand Your Ground Laws Increase Gun Violence and Perpetuate Racial Disparities.”

The report references a paper published by the Urban Institute. It was found that homicides are 65 percent more likely to be justified in states with stand your ground laws when the defendant is White.

“Black bodies have always been used as a justification for White terror, or White tears, and racist terror,” Mr. Woodall said. “The truth is, is that a White girl was killed. Though unfortunate, though mistaken and unintentional, because … a White girl was killed and a … Black male was responsible for pulling the trigger in which she was killed, that his life must forever be tainted by such. That is at the heart of this,” he argued.

The issue for Atty. Muhammad is, police “are able to use that reasonable fear of harm as justification to kill Black people, but Marc Wilson’s reasonable fear for his life was not respected.”

She also questioned why the White teenagers in the case weren’t charged with being responsible for the death of Haley Hutcheson or for assault against Mr. Wilson.

“Our racial history here in America suggests that because a White woman was killed, that somebody was going to be convicted. That was just denial of justice, by any means,” she said, referencing the case of Emmett Till, who was tortured and lynched in 1955 after allegedly flirting with a White woman.