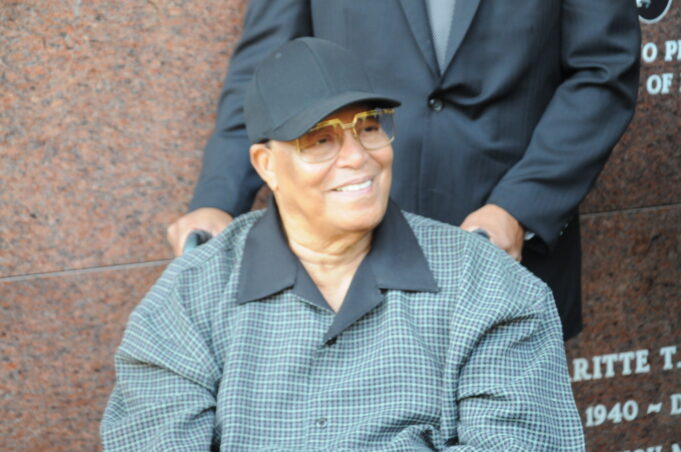 It has been eight years since the death of Mr. Barry and four years since the unveiling of the eight-foot-tall full body bronze statue of his likeness. His wife, Cora Masters Barry, invited Minister Farrakhan to Washington, D.C., to visit Mr. Barry’s gravesite at the Congressional Cemetery and the statue in front of the John A. Wilson Building.

The Minister shared words of guidance, comfort and inspiration as he expressed his love for his brother and friend, Mr. Barry on September 18 at the gravesite and also at the foot of the statue.

“My brother is not dead,” Minister Farrakhan told the people gathered at Congressional Cemetery. “He’s alive, but you can’t understand that the flesh going back to the Earth is not the end of God’s greatness.”  He explained the meaning of a verse from the Qur’an—the Islamic holy book—with a biblical lesson from his teacher, the Most Honorable Elijah Muhammad.

He explained the story of Prophet Elijah whose bones were disturbed in the grave and began shaking. The Minster explained to those gathered what the shaking bones symbolized.

“It means that he ruled from the beyond the grave,” said Minister Farrakhan.  “Marion Barry rules, God rules. When you suffer for God, that is not your end.  It’s the beginning of your resurrection to higher ground,” the Minister explained.

He also thanked Mrs. Barry. “Cora, there are no words for me to say thank you for allowing me this privilege to come and be with the flowers that were not here before.  But they are here now,” Minister Farrakhan expressed.

“We are here to demonstrate our love for this beautiful, magnificent wonder of God.  Rise up and whatever you learned from him, put it into practice, whatever you learned about Jesus, put it into practice. Don’t talk Christ, live Christ, so when you walk, Christ walks, when you talk, Christ talks, when you sing, Christ sings. When your hands clap, and work, God is working through your hands.”

He added, “Thank you, Cora, for being the hands for Mayor Barry. Thank you for saying yes to what he wanted to do and then you went to work to make it happen.  I’m not here in a cemetery feeling sad. I’m thanking God for my sister.”

The friendship of Minister Farrakhan and Marion Barry is decades old. “I witnessed the value and beauty of a servant and a soldier in Marion S. Barry Sr. He stood for his people in the city of Washington, D. C., while he was the mayor and he gave poor people a chance to advance and the redeeming possibility to display the best of themselves as he held office as mayor,” said Student Minister Abdul Khadir Muhammad, Mid-Atlantic Regional representative of the Nation of Islam.

He explained that Mr. Barry opened the doors of Washington, D. C., to Minister Farrakhan for the historic 1995 Million Man March, when two million Black men gathered in the nation’s capital for a peaceful day of atonement, reconciliation and responsibility. “The Honorable Minister Louis Farrakhan gave us a model of how each one of us must show respect to our brothers and sisters in the struggle, specifically those of whom their lives have passed on so that we may succeed as we build the Kingdom of God. Let us remember Allah’s (God’s) contribution of life and the many gifts and talents that He gave to Mayor for Life, Marion S. Barry, Sr.,” said Student Minister Khadir Muhammad.

That’s when Claudette Marie Muhammad went to work with Mrs. Barry and event planner Shiba Freeman Haley to help organize Minister Farrakhan’s visit. Sister Claudette Marie Muhammad, the Nation of Islam’s Student National Fundraising Director, told The Final Call that the Minister “invoked the spirit of Allah’s grace and gave words of praise and comfort to all the grave sites he visited.”

“It (the ceremony) was very moving, there were many people in tears. Andy Shallal, owner of Busboys and Poets and board member of the Marion Barry Legacy Foundation, spoke. He talked about how Mayor Barry provided good paying jobs and expanded opportunities for Black businesses. Bishop Thomas Masters, Cora’s brother, hosted the service for the close to 200 people in attendance,” shared Sister Claudette Marie Muhammad.

The memorial service was described by Mrs. Barry as an “act of great affection.” She explained that she has known Minister Farrakhan for years. “He’s been a member of the family.  So much has been said about him, so many great things and all of them are true. Today, this is about love, respect, and admiration for a great man,” she said. (To read excerpts of Minister Farrakhan’s message from the wreath-laying ceremony for Mr. Barry, please see page 20.)

At the end of the memorial service for Mr. Barry, Minister Farrakhan said, “I have a few more graves to visit. I will visit the grave of the mother of the Million Man March, Dr. Dorothy Irene Height. You don’t know the hell that woman suffered when she wanted to stand with me.”

From the Congressional Cemetery, Minister Farrakhan traveled to Ft. Lincoln Cemetery where Dr. Height and Dick Gregory are buried.  At the grave site of Dr. Height, the Minister spoke to the crowd about Dr. Height’s challenges and her tenacity to persevere.

Mrs. Height, who served as president of the National Council of Negro Women for decades, was warned not to lend her support or be involved with the Million Man March.

The civil rights icon wrote of her experiences in her memoir. “When I made my decision public (to support Minister Farrakhan), the phone started ringing. People called from all over to express their concern. One call, from some of my closest friends, came from Martha’s Vineyard. ‘We are calling you from a house full of your friends,’ they said. ‘We beg you not to have anything to do with the Million Man March. You have never been tainted. Please don’t do it.’ ” Ms. Height continued.

“Michelle Cowan, a good friend, did not hesitate to get to the point. ‘Dorothy,’ she said, ‘if you get involved with this march, I will no longer be able to justify Jewish support for the National Council.’ ’Well then,’ I replied, ‘I guess I’ll just have to find more African-American support.’ I did not feel that my involvement with the march was in any way inconsistent with my beliefs or the positions on issues that I had taken all of my life,” she continued.

“I heard Mrs. Height was in the hospital because one of our brothers, envious, did not wish for her to get involved with me,” shared Minister Farrakhan. “She went to that hospital and came out more determined to help the Million Man March,” he added.

Dr. Height was a featured speaker at the March. “When she stood up at the March she said to those men, ‘I am here because of you.’ She was undaunted. That’s why nothing anyone said or did could keep her away,” said Mrs. Barry.

Minister Farrakhan told the crowd that God favored Dr. Height in life and death. “She owned the building for the organization started by Mary McCloud Bethune, (National Council of Negro Women). That beautiful Black woman, my mother adored her and adored what she started for us. We are honored,” the Minister continued.

After laying a wreath honoring Mr. Gregory, the Minister reflected on the life and service of his friend, who passed in 2017. “Remember when those that have passed away there’s a duty to those that have been served so well by them. One of the things that God’ hates is ingratitude. And Dick paid a price to be Dick Gregory and he was always working not for the good of self. He was spiritually in tune with the Universal God and he always worked for the good of others,” shared Minister Farrakhan.

Ms. Haley, owner of Mahogany Entertainment described it as an “unexpected blessing” that the Minister visited the grave of her son, who is buried in the same cemetery as Dr. Height and Mr. Gregory. “They are icons. Rene was just a young and beautiful person who was finding his way.  But Minister Farrakhan took the time to pray for me at his gravesite and to speak his name. I am forever grateful and encouraged by his amazing words and spirit of love,” she told The Final Call.

“Thank you is inadequate for this mother who knows that God continues to send his messengers to keep me whole. Thank you, Minister Farrakhan, from the depths of my heart.”