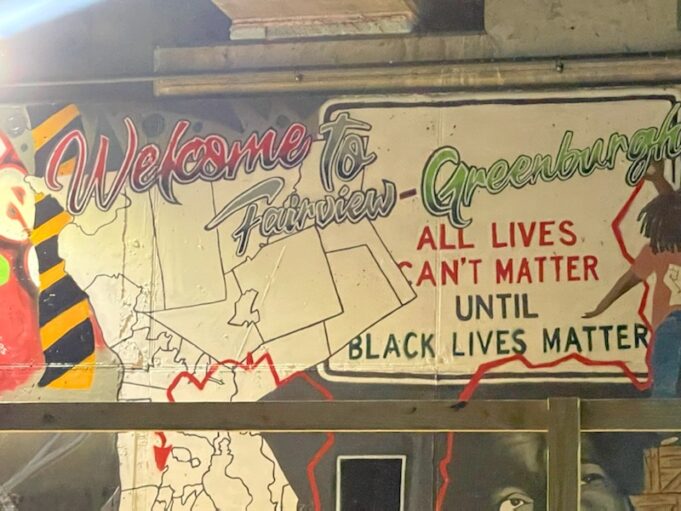 NEW YORK—After receiving backlash from the town’s supervisor, a young Black artist and his supporters are standing and united on efforts to keep an image of the Honorable Minister Louis Farrakhan on a wall mural with other known Black leaders in Greenburgh, New York. The mural is located under the I-287 bridge on Manhattan Avenue in Westchester County.

The lead artist who conceptualized the vision of the mural and who would be depicted on the 2,500 square foot mural is Kindo Art.

Mr. Art has a desire to record history as he sees fit from his expression of art from the Kemet era in Ancient Egypt to present time.  What was to be an inspirational rendering of art to unify this Westchester community has caused derision and controversy by the town’s Supervisor Paul Feiner, who insists that the depiction of Minister Farrakhan be removed.

“Mr. Feiner has been calling me feverishly to have a one on one with me to try to get me to change my mind and not include Minister Farrakhan in my painting,” Mr. Art stated. “It is like he’s trying to dictate to us who our leaders are,” he added.  “I want to reflect what Black leaders and other Black figures mean to us as a community.”

Mr. Art said that the Nation of Islam minister represents a strong and peaceful contrast to what’s currently going on in Washington, D.C.  “He organized The Million Man March in 1995 in Washington D.C., which means a lot to me, because it’s something that will be remembered for generations to come.”

Out of nearly 50 images being painted on the Black Lives Matter mural the only one that is generating backlash is Minister Farrakhan’s. Other images on the mural include former professional basketball player Mahmoud Abdul Rauf, who refused to stand for The National Anthem before NBA games to protest the long history of tyranny and oppression the song represented. He was effectively blackballed by the league for his stance. Other images on the mural include Kenneth Chamberlain Sr. and Danroy (DJ) Henry, two Black men who were killed by police in Westchester nearly a decade ago, and others.

Kindo Art along with six other artists, Mahodd Harvin, Shanekah Bennett, Ikiyan Chestnut, Erin Jacobsen, Omar Watson and Arianna Hoover have spent countless hours and days painting to complete one half of the project which will include another 2,500 square foot design once the first wall is completed.

“Not only did I include known historical figures but in addition other Black people in the struggle to provide knowledge to people who may not be familiar with them,” explained Mr. Art.  “My mother and father had a great impact on my life and how I am. My mother, who passed away in 2003, was a teacher and my father, who was a community affairs detective who provided security for Minister Farrakhan and had dinner with him back in the days, has taught me to be firm in my commitments,” he explained.

“And in the spirit of self-determination, we define who our leaders are.”

A recent press conference was held at the site of the mural which was attended by community residents, supporters, and members of Muhammad Mosque No. 7 in New York led by Assistant Student Minister Arthur Muhammad.

“We are here this evening to stand in support of the brothers and sisters of the Greenburgh community in saying our heroes are our heroes. Your refusal to bend, bow down, and capitulate to the pressure applied by Town Supervisor Paul Feiner has earned the respect and admiration of brothers and sisters from around the country,” said Student Minister Arthur Muhammad.

“Whereas the Town Supervisor expected this controversy to go away quietly, because of your revolutionary spirit, Greenburgh is on the map and the whole world is now looking at tiny Greenburgh, New York.”

The controversy got the attention of the executive director of the National Coalition Against Censorship, Christopher Finan. He emailed a letter to the Greenburgh Town Supervisor, Paul Feiner, encouraging him to allow the mural to be completed as originally agreed. “We are concerned to learn of your calls to remove the depiction of Minister Louis Farrakhan from a new town commissioned mural by the artist known as Kindo Art. These demands have serious implications for freedom of expression,” Mr. Finan stated in the letter.

“To dictate who can and cannot be represented in the mural does a disservice to the projects original intentions of celebrating Black voices, contributions, and histories by attempting to assert control over them” he added.

“This is ‘our’ history, and it should not be erased,” Greenburgh resident Shanekah Bennett stated proudly at the press conference. Ms. Bennett is also a contributing artist to the project.

The picture of Minister Farrakhan at the Watergate hotel press conference on November 17,2017, inspired the 34-year-old artist Kindo Art to paint the portrait as a way to show honor and respect to a man he speaks highly of and who has had a positive impact on his life.

Mr. Art and other supporters remain firm in completing the mural as contractually agreed upon and approved since 2020.

Student Minister Arthur Muhammad encouraged the public to support the project. “As Black people our position is clear. No one from outside of the Black community has earned the right to dictate to the Black community who our leaders are and who our leaders are not. The demand to erase the Honorable Minister Louis Farrakhan from this beautifully painted mural is a direct insult to tens of millions of Black people,” he said.

The premise for the demand to remove the Minister’s image is false as the Muslim leader is not a hater of those who are White, Jewish, Christian or members of the LBGTQ community, Student Minister Arthur Muhammad explained. Nowhere in the history of his decades of service to the Black community or humanity in general is there any record of Minister Farrakhan encouraging Black people to hate or to be violent against others, he continued.

“We believe that it is your hatred of him that motivates your desire to have him removed from this wall. You cited no one else to be removed but him. We are here to tell you that your hatred of the Honorable Minister Louis Farrakhan is hatred of the legitimate aspirations of Black people. Because that is exactly what the Minister speaks to.

This is why our people, love him and resonate with his message. His message is a message of love for self, self-respect, self-reliance, and self-determination. Black people see him as the premiere leader of this time. Even if you were to be successful in taking his image down from the wall, you can never erase him from the hearts and minds of Black, poor, and oppressed people.”