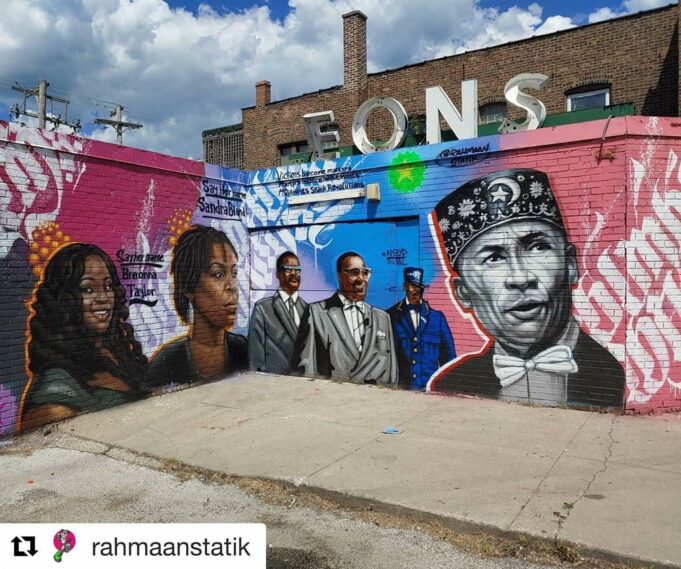 Images are powerful! There is a current controversy regarding the image of the Honorable Minister Louis Farrakhan. In Greenburgh, New York, in New York’s Westchester County, County Supervisor Paul Feiner is leading the effort to have a recent mural image of our beloved Minister removed from a city underpass.

Supervisor Feiner objects to the image of the Honorable Minister Louis Farrakhan being on the bridge’s underpass as part of a mural the city commissioned to be painted by several local artists. The mural is in tribute and celebration of some of the great luminaries; some of the great heroes and heroines that we as Black people love and admire for their contributions to making life better for us and our children.

This negative image portrayal of Black people has actually been a hidden, obscured and obfuscated area of Black-Jewish relationships. Scholar Abraham Melamed in his book, “The Image of Blacks In Jewish Culture,” explosively states:

“… the stereotypical image of the black takes the form it is to have in the Midrashic, literary and philosophical tradition of the Middle Ages: the black is identified as animal-like, ugly, dirty, lustful and lascivious, and by nature a treacherous slave….

“A principal finding in this research is that like so many other components of Jewish rabbinical culture, the image of the black as inferior other took shape in the writings of the Sages. As we show later, such an image is almost entirely absent from the Bible. While undoubtedly there were late Hellenistic–Roman external influences, the image was an authentic product of rabbinical culture and as such it had far-reaching influence, notably on the image of the black as inferior and other, and on the image of skin colour in general in Jewish cultural history, down to our own day.”

What Professor Melamed reveals is how all the well-known negative anti-Black stereotypes have their origin within Jewish rabbinical literature (i.e. Talmud); this rabbinical literature is the ideological root and seed-bed of ideas that guided and inspired the portrayal of Black people over the long history of Hollywood films.

As Neal Gabler writes, Hollywood became the laboratory for the creation of American culture as we know it, and that being as a result of the Jews who established it:

“What is amazing is the extent to which they succeeded in promulgating this fiction throughout the world. By making a ‘shadow’ America, one which idealized every old glorifying bromide about the country, the Hollywood Jews created a powerful cluster of images and ideas—so powerful that, in a sense, they colonized the American imagination … Ultimately, American values came to be defined largely by the movies the Jews made.”

—Neal Gabler, “An Empire of Their Own: How the Jews Invented Hollywood”

The result of Jewish filmmakers and production companies using “the image of Blacks in Jewish culture” as a guide for their portrayal of Black people within their films might be best summed up by screenwriter and novelist Dalton Trumbo who explained:

“[Hollywood made] tarts of the Negro’s daughters, crap shooters of his sons, obsequious Uncle Toms of his fathers, superstitious and grotesque crones of his mothers, strutting peacocks of his successful men, psalm-singing mountebanks of his priests, and Barnum and Bailey side-shows of his religion.”

The knowledge of this hidden history of how anti-Black stereotypes went from the mind of ancient Jewish rabbis to the pages of the Talmud to Hollywood’s silver screen is astounding!  Hollywood’s negative portrayal of the Black man and woman of America has long been the subject of much criticism.  What has been missing, however, in these critiques is the hidden history of how it was Jewish rabbinical teachings that lie at the root of this dangerous reality.

As Barry Shwartz and Robert Disch wrote in their book entitled “White Racism”:

“This statement should surprise no one, since Hollywood, more than any other institution, has been responsible for the glorification of the South, past and present, and for creating the image of black inferiority. It created the lying, stealing, childish, eyeballrolling, feet-shuffling, sex-obsessed, teeth-showing, dice-shooting black male, and told the world this was the real Negro in the U.S.A.

It invented the Negro “mammy” whose breasts were always large enough to suckle an entire nation, and who always loved old massa’s chilluns more than she loved her own. The men of Fake-town have brainwashed America and the entire world with the brush of white supremacy.”

And all the while as Hollywood made films that exploited and negatively stereotyped Black people, the ADL was silent.  Yet in their founding charter, they acknowledge the danger of negative image portrayals of a people:

“For a number of years a tendency has manifested itself in American life toward the caricaturing and defaming of Jews on the stage, in moving pictures.  The effect of this on the unthinking public has been to create an untrue and injurious impression of an entire people and to expose the Jew to undeserved contempt, and ridicule. The caricatures center around some idiosyncrasy of the few which, by the thoughtless public, is often taken as a pivotal characteristic of the entire people.”—Sigmund Livingstone, Original charter reproduced in B’Nai B’Rith News, October, 1913

Importance and power of Farrakhan’s image

The ADL never takes a stand against Hollywood’s defamation of the image of Black people. Yet they are always available to show up to condemn a man like the Honorable Minister Louis Farrakhan who has given to Black people a beautiful image of strong Black manhood to look at an emulate.

I am reminded of a verse of scripture in the Bible that states:

Allah (God) is prophesied to come at the end of this present world; and when He comes, the scripture’s prophecy that He will be seen. However, His coming involves the judgment of the wicked. So, the wicked, who have enslaved and persecuted the people of Allah (God) fear His coming and fear that His judgment will result in their destruction. They fear that when the time comes for “the Lord thy God” to reveal his beautiful face to the people, it will be the time of their suffering His wrath.

This fear of death being the result of seeing the face of God, is the root reason why Paul Feiner and the ADL want the Minister’s image removed from the public mural. The glorious image of Minister Farrakhan enamors the righteous and frightens the wicked.  They are ultimately afraid of the death of the old “master-slave relationship.” This relationship continues to flower as long as the philosophy of “White supremacy and Black inferiority” shapes the attitudes of the people of America.

The Minister’s face is not only a reminder of Allah’s (God’s) judgment of the wicked, the wicked also fear the inspirational impact of the Minister’s image.

When Minister Farrakhan was a small child, he looked with love, fascination and admiration at a portrait of Marcus Garvey; the Minister ultimately grew up to become a strong Black leader like Garvey was. Those who want Minister Farrakhan’s image removed from the Greenburgh mural fear that if little Black children in today’s time are exposed to Minister Farrakhan, they will grow up to follow in his footsteps.

—The Honorable Elijah Muhammad, “The Theology of Time”

We thank Allah for Minister Farrakhan’s powerful words and his beautiful image.  He has truly given to us the example of the kind of human being and servant of Allah (God) we all should aspire to be.