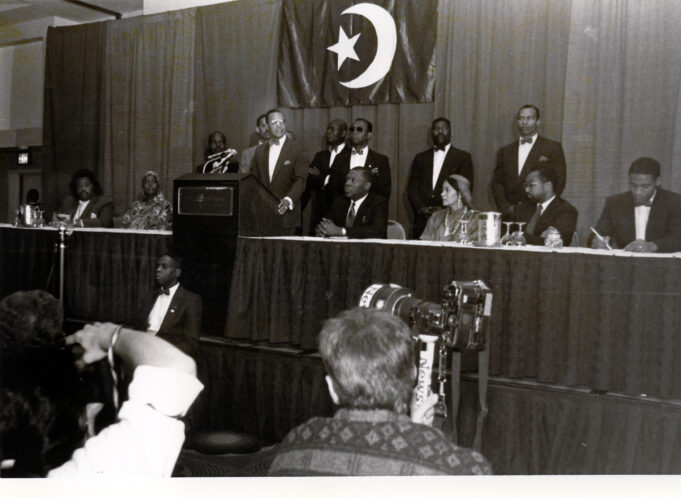 As we observe the sacred experience of the Honorable Minister Louis Farrakhan’s September 17th vision-like experience, it brings to mind how this experience manifests aspects of the Biblical Elisha who like his teacher, Elijah, had experiences with God’s flying chariots of fire. This prophetic episode illustrates how God grants His servants with insight into the enemy’s secret operations and rescues His servants with His flying war vessels.

In the Bible, the prophet Elijah had an anointed servant, Elisha, who was granted a double portion of the divine spirit before Elijah would escape to be with God upon His flying fiery chariot in the sky (2 Kings, Chapter 2). Similarly, the Most Honorable Elijah Muhammad anointed and appointed Minister Farrakhan as his National Representative to carry on his divine work before he would leave to be with his God—the God who came in the person of Master Fard Muhammad and operates from a large heavenly wheel-shaped vessel.

While this description of God is most congruent with the prophetic scriptures, it’s rather ironic how the Honorable Elijah Muhammad and Minister Louis Farrakhan are virtually the only leaders of significance whose God fits these real-life descriptions.

One of the most identifiable episodes of Minister Farrakhan‘s ministry involves his highly publicized vision-like experience that took place September 17, 1985, when he was taken to the huge circular plane known as the Mother Wheel by way of a smaller wheel-shape plane (so-called UFOs), Here he met with the Honorable Elijah Muhammad—a man the world thought had died in 1975.

It was in this life altering experience that Elijah Muhammad shared prophetic information with his servant, much of which involved then President Ronald Reagan’s secret meeting with his Joint Chiefs to plan a war.

During this divine experience, the Minister was given direct orders from the Honorable Elijah Muhammad to hold a press conference and tell the world about these secretive plans that were taking place within the highest echelons of the U.S. Government. Perhaps the boldest of the instructions given to Minister Farrakhan was to “Tell them you got it from me, Elijah Muhammad on the Wheel!”

At the expense of appearing insane before the world, Minister Farrakhan followed the instructions of his teacher by holding an international press conference on October 24, 1989, in Washington, D.C., where he detailed his vision-like experience on the Wheel, exposed the President’s most sensitive classified war plans, and told the world where he got it from. More intriguing is the fact that Minister Farrakhan warned world governments and leaders about his divine backing in these words:

“… Before you will be able to establish your mockery of me (if that is what you wish to do) for what was revealed to me in the Wheel you will see these wheels, or what you call UFOs, in abundance over the major cities of America … .”

Within 24-hours the Washington, D.C. area and the country became immediately flooded with mass UFO sightings. News stories about these sightings ran on local news stations for three days following the Minister’s press conference, but unsurprisingly all the media personnel took extra precautions not to mention anything about Minister Farrakhan who had just warned the world about these crafts the previous day.

This highly publicized experience of Minister Farrakhan has served much like the proverbial 800-pound gorilla in the board room that leaders, critics, and skeptics try their best to ignore—because to acknowledge his relationship with these superior crafts is to admit that he is divinely backed by the Supreme Being and that his teacher, Elijah Muhammad, has to be physically alive.

However, those in high government offices are well aware of Farrakhan’s connection to the reality of these unidentified aerial phenomena (UAP), which is why they have plotted against him, the Nation of Islam, and have worked to keep this truth away from the people. The biblical prophecies found in the 6th chapter of 2 Kings provide a vivid picture of this scenario as God gives his servant divine insight into secret government and military matters.

Just as Minister Farrakhan received revelation and exposed what was taking place within highly classified government/military meetings, we read about how God gifted Elisha with divine insight into the secret war plans taking place in the Syrian king’s private chambers. The king of Syria warred against God’s people, but realized his plans were being thwarted because somebody was exposing his secret plans that were devised in his private chambers. When he found out that Elisha was the one who knew about his highly sensitive war plans, this enraged the king of Syria to summon his army to capture and attack Elisha.

Today Minister Farrakhan’s experience on September 17, 1985, has given him insight into the plots and war plans of numerous U.S. Presidents starting with Ronald Reagan. Nearly two years after his vision-like experience, it was leaked in various newspapers that in the late summer (early September) of 1985, President Reagan actually did meet with his Joint Chiefs of Staff to plan war strikes against Libya.

The Atlanta Journal Constitution and Washington Post headlined, “U.S. planned to invade Libya in ‘85” in their February 1987 publications. How could Minister Farrakhan receive foreknowledge of such classified information from a man who is supposed to be dead? The more we investigate such questions, the more it becomes evident that he got it from Elijah Muhammad on the Wheel.

A common theme in the scriptures show how the ruling oppressors become enraged when their war plans are interfered with by the voice of God’s servant, so they plot to destroy that divine servant. When the Syrian king’s plans against Israel didn’t work, he questioned who could have known about his secret plans, only to find that the Man of God, Elisha, was given insight into what was taking place in the king’s private quarters.

The enemies of Elisha were out to capture him because he kept exposing their secret war plans. Just when the enemy’s army seemed to trap him in the small town of Dothan, Elisha prayed, then he and his servant witnessed God’s power over his enemies (2 Kings 6:17). That power involved the appearance of God’s heavenly chariots over the surrounding mountains, and a blindness fell over the king’s army, which allowed Elisha to be safely led out of harm’s way.

The king led his army against Elisha just as the U.S. Government (FBI, CIA, Homeland Security, et al) has plotted against the noble work of the Honorable Minister Farrakhan who continues to disrupt their wicked agendas with the truth he was given from the Honorable Elijah Muhammad on the Wheel.

Knowing the government’s wicked plans to destroy Libya—a small African-Islamic nation, Minister Farrakhan traveled overseas to Libya where he warned Col. Muammar Gadhafi and dozens of nations about the revelations he received from his experience. This was during the time when America was already preparing their air strikes against Libya’s leader. But, it was the voice of Farrakhan that interfered with President Reagan’s assassination attempt of Col. Gadhafi in 1986.

Like the Syrian king who sought after Elisha for interfering with his war plans, the Reagan Administration and U.S. State Department sent policies to apprehend any U.S. citizen for visiting Libya, particularly Minister Farrakhan. They awaited at every airport entry to arrest the Minister upon his arrival to the States. It was during this hostile time and to the amazement of those with him, that he simply walked right past all the U.S. Customs security awaiting him. Apparently, they had been temporarily blinded to his presence and the State Department did not know Minister Farrakhan was in the country until about two weeks later.

Just as God delivered Elisha from the king’s army during what seemed to be a vulnerable moment, Farrakhan has withstood the vilest attacks from the most powerful government in the modern world. Perhaps what is most remarkable is that he states that the power of the wheels (UFOs) is the power that guides and protects him:

“That which you call ‘Unidentified Flying Objects’; that which you and white people put ‘Above Top Secret’—it is real. There is a plane out there made like a wheel … It has 1,500 little planes on it. They follow me everywhere I go. You can take it or leave it. I am not trying to impress you!” the Minister stated.

Both the prophetic scriptures and the plain histories show how the oppressors’ plots to destroy God’s servants are thwarted by divine revelation and the presence of God’s flying military aircraft that serve as proof of His superior power and presence. Moreover, these prophecies and histories provide ample evidence of the mightiest God who aids His servants during what appears to be the most vulnerable moment.

Brother Ilia Rashad Muhammad serves on the Nation Of Islam Research Team and is the author of “UFOs And The Nation Of Islam: The Source, Proof, And Reality Of The Wheels.” For more information visit: www.nationbrothers.com and follow him @iliarashad on Twitter.