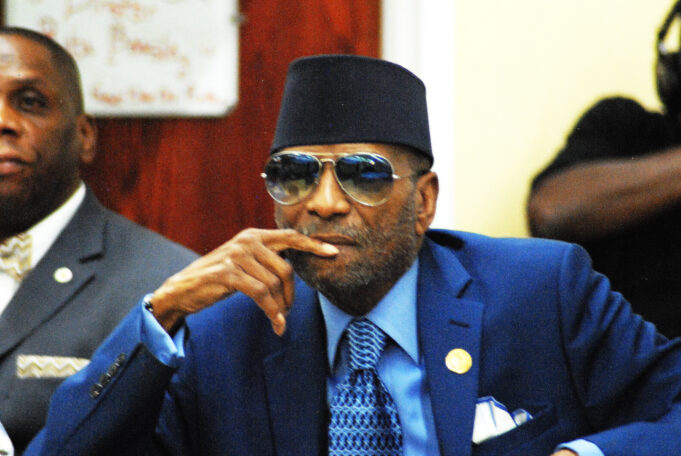 CHICAGO—Nasik (Prince) Asiel Ben-Israel was an impactful religious leader, world traveler, business man and friend to the Honorable Minister Louis Farrakhan, the Black community and poor and suffering people across the globe.

Min. Farrakhan joined a plethora of religious, political and civic leaders and organizations, and family who paid tribute to Prince Asiel, the Prime Minister and International Ambassador of The Original African Hebrew Israelite Nation Worldwide, at his homegoing, memorial service.

“He did it God’s way,” said Min. Farrakhan. “He practiced righteousness. He practiced good. He practiced treating everyone the way he would like to be treated. There isn’t any better religion than that.”

For more than 50 years, Prince Asiel championed peace and unity in Chicago, Israel, Africa, and the world. He is survived by his wives, 15 children and over 60 grandchildren and great-grandchildren. Several of his children spoke at the three-hour memorial service at Trinity United Church of Christ, held Sept. 2. Prince Asiel died Saturday, August 22 at the age of 81.

“I extend my condolences to all of you because we did not personally suffer a loss, we collectively did,” said Prince Asiel’s son, Yosef Ben Prince Asiel, at the memorial. “We stand before you knowing that our father, our brother, our friend gave us all that he had. So, we are at peace.”

Often referred to as the Black Hebrews, founded by spiritual leader, the late Ben Ammi Ben-Israel, the group believes they are direct descendants from the ancient Israelites of the Old Testament. Non-Black, mainstream Jewish scholars cite the Talmud as the reason they do not consider the Black Hebrews as true Israelites, but this controversial belief coincides with the Teachings of the Most Honorable Elijah Muhammad as explained by Min. Farrakhan in a 2010 lecture, “Who Are The Real Children of Israel?” in Atlanta, Georgia.

“The Honorable Elijah Muhammad has said that Almighty God Allah revealed to him that the Black people of America are the real children of Israel. And we are the choice of God; and that unto us He will deliver His Promise,” the Minister stated during that message.

Under the leadership of Ben-Ammi, 350 Black Hebrews left America for the Promised Land, where they have lived since 1969. They were not welcomed with open arms, and after years of resistance, the Israeli government allowed a permanent settlement on an abandoned military base near the southern desert city of Dimona on the outskirts of the Negev Desert near a nuclear reactor.

Over the years, Prince Asiel would often be seen, always with a smile on his face, talking to people from all walks of life in the restaurant and he would often encourage people to visit Dimona. “You should go. I’ll take you,” he would say.

Dimona is currently the home to an estimated 3,000 Black Hebrews.

“He took me to Dimona. I said, Wow!  These people (Israeli government) loved us so much, they had a nuclear reactor in Dimona. They thought that they were settling the Saints in a terrible place that would give them hell, but they turned hell into heaven,” said Min. Farrakhan during his remarks at the memorial. “Because when they planted you there, they had to realize that God was with you.”

The Minister expressed appreciation for seeing how they were living in Dimona.

“I knew Ben Ammi was a special man and I will always love him, but he had a special man by his side. And that special man was your husband, your father, one of the great lives of our time who helped Rabbi Ben Ammi to become the great one that he became … it was the work of Asiel Ben-Israel that made the whole world know Rabbi,” said Min. Farrakhan.

Prince Asiel served as president and CEO of Bold Spiritual Initiative, president of Africa Israel Asia, international spokesperson for Straight Talk Economic Roundtable, chairman of First Africa Corporation, a sponsor of the annual Holy Jerusalem Summit Conferences, and a convener of the National Leadership Council of African Americans, according to The History Makers.

Prince Asiel also has served with Support-a-Child International, Inc., as a board member of the International United Black Fund, coordinator of the African Development Program’s private volunteer organization project and director of its international fundraising projects, as a special economic advisor to the World Conference of Mayors, as an advisor to the U.S. Congressional Black Caucus, and as a member of the African American Clergy Network of Chicago.

Several civic leaders, including Chicago Mayor Lori Lightfoot, U.S. Rep. Danny K. Davis (D-Ill.) and U.S. Rep. Bobby Rush (D-Ill) attended the memorial. Calling him a “freedom fighter,” Mayor Lightfoot said, “It’s critically important when The Lord calls home a strong Black man; one who stood tall his whole life in his commitment to creating and highlighting Black excellence; we must gather in humble reverence and celebration to a life well lived. A life lived not for himself but a life for the benefit of all Black people.”

Yosef Ben turned towards Min. Farrakhan seated in the audience and said: “My father stood with you in 1977 when you took on the work of resurrecting the Teachings of the Most Honorable Elijah Muhammad … and as my father did up until his last breath, his post is not abandoned, because brother, we stand with you. Our nations are one.”

Yosef Ben plans to continue his father’s work, he said, as he urged his family and other Black Hebrews to join him.

“As we come to celebrate the life and legacy of such a great man, we must do so in continuing his work,” he said. “So, we can’t leave here divided because our nation can’t survive with division.”

To read excerpts from Minister Farrakhan’s message from the memorial, see page 20.