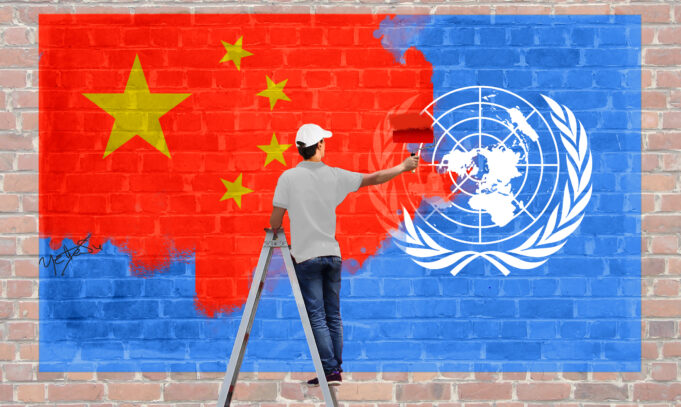 The Peoples Republic of China is the focus of criticism by human rights defenders accusing the regime of genocidal practices, ethnic cleansing, crackdowns, and forced disappearances of Uyghur Muslims and other ethnic minority groups in its northwest Xinjiang region. A United Nations Office of the High Commissioner for Human Rights (OHCHR) recent report said credible evidence of serious rights violations by China against the Uyghur population and other minorities can constitute Crimes Against Humanity. However, there are concerns over the failure of the report to call the atrocities genocide.

The 46-page “OHCHR Assessment of Human Rights Concerns in the Xinjiang Uyghur Autonomous Region, People’s Republic of China” released August 31, was issued by Michelle Bachelet, the former head of the Human Rights Commission on the final day of her four-year tenure.

Rights advocates applauded the report as a game changer for international response in the decades-long struggle for justice and accountability. Some welcomed the long-awaited report but voiced mixed feelings about its scope.

“It is a breakthrough,” Rashun Abbas, executive director of Campaign for Uyghurs, told The Final Call. “We have been waiting for this report for ages … for years, months … weeks and days to the last hours and minutes,” she said.

She was referring to the document’s release reportedly 13 minutes before Ms. Bachelet’s term expired. Ms. Bachelet caught the ire of rights groups for what they say was an extended delay in issuing the report, widely expected to address genocide. They complained there was a lackluster duplicitous position on the Uyghurs while she led the Human Rights Commission.

Ms. Bachelet was pressured from opposing sides—rights groups calling for its release and China pressing against it.

“I said that I would publish it before my mandate ended and I have,” Ms. Bachelet told French journalists on Sept. 1. “The politicization of these serious human rights issues by some states did not help.”

Earlier this year, Ms. Bachelet visited China and was accused during a press conference of promoting Beijing’s narrative and accepting its justification for the crackdowns. But the report dismissed China’s narrative, saying “serious human rights violations have been committed in [Xinjiang] in the context of the government’s application of counterterrorism and counter-‘extremism’ strategies.”

Ms. Abbas called it a breakthrough.  “Is it enough? No, it’s not enough,” she argues.

Activists say the report confirms the arbitrary detention, torture, sexual violence and forced labor, which constitutes crimes under the Geneva Conventions. The Convention defines genocide as “acts committed with intent to destroy, in whole or in part, a national, ethnic, racial or religious group, as such.”

Victims are targeted because of real or perceived membership of a group. This includes killing, causing serious bodily or mental harm, imposing living conditions intended to destroy the group, preventing births, and forcibly transferring children out of the group. All allegedly done to Uyghurs say advocates.

They have the evidence, documents and testimonies, “but they didn’t call it genocide,” argued Ms. Abbas. The report is a watered-down narrative of what is allegedly happening. Ms. Abbas, a Uyghur activist whose sister is currently “detained,” and husband’s whole family missing, voiced angst that any reference to genocide was absent. Instead, the report said possible “crimes against humanity” may be occurring in the region. “As a family of genocide victims, we were extremely disappointed,” she said.

“I also have mixed feelings,” said Omer Kanat, executive director of the Uyghur Human Rights Project in a Final Call interview. “I can say that because, on the one hand, I’m happy that this report finally came out, but on the other hand, we are really sad because it was not strong enough,” he said.

Now that the UN has weighed in with open recognition, there should be no excuses for the international community to also weigh in. Though flawed, rights defenders agree they needed the UN report because international forums, including UN agencies balked at moving on the issue without it. “We approached all of them, and they told us that they cannot do anything because there is no report from the UN,” said Mr. Kanat.

The report also notes that human rights abuses included “far-reaching, arbitrary and discriminatory restrictions on human rights and fundamental freedoms, in violation of international norms and standards,” and that documentation of “patterns of torture or ill-treatment” is credible, including “incidents of sexual violence.”

China released a 131-page response condemning the report as a “so-called ‘assessment’” outside the scope of Ms. Bachelet’s office and “distorts China’s laws and policies, wantonly smears and slanders China, and interferes in China’s internal affairs.”

Chinese Foreign Ministry spokesperson Wang Wenbin lambasted the document as being “planned and manufactured first-hand by the U.S. and some Western forces” and is a “hodgepodge of misinformation” and “a political tool.”

Uyghurs live in Xinjiang which they call East Turkestan and has a distinct culture, language and are a predominantly Muslim Turkic ethnic group. The region has a population of 25.85 million people and rich in coal, gas, oil, lithium, zinc and lead, and a major source of agricultural production, such as cotton. The area is China’s gateway to Central Asia and beyond. Other predominantly Muslim ethnic groups in the region include, Hui, Kazakh, Kyrgyz, Mongol, and Tajik peoples.

Mr. Kanat says the underlining problem is China’s impeding freedom, justice, and self-determination of people seeking to maintain their own identities and be themselves. Besides taking their land, China systematically stripped them of their names, culture, and freedom of religious expression.

Appealing to the international community for attention has been an uphill road. But more concerning is the silence of the Muslim World. “They put economic interests before this … and they don’t want to say anything,” said Mr. Kanat.

Uyghurs are disappointed over this “betrayal of their brothers in faith,” claiming Muslims are one body; but at present, “Uyghurs remain amputated from that body,” he said.

The Uyghurs’ cry for justice is part of a global cry Muslims are duty-bound to answer, said the Honorable Minister Louis Farrakhan of the Nation of Islam. He described it as a “universal cry for justice,” and warned tyrannical rule everywhere will be removed today by God Himself.

The Muslim leader exhorted the Muslim World to “rise up with strength” from “our capital of Islam” in the Holy City of Mecca in Arabia.

“Why should Muslims suffer in China, and we not go to China and speak on their behalf? Why should Muslims suffer in Myanmar, and we don’t send representatives from the Holy City of Mecca to plead for them?” he asked. “We are powerful all over the world so Muslims should not suffer anywhere without our leadership in Mecca and beyond looking out for the least of the Muslims who are suffering,” said Minister Farrakhan.

He said the world of Islam should not allow believers to suffer anywhere and Muslims should speak against any government persecuting a believer in Allah (God).

The Uygur question in China comes amid a time of universal change. Minister Farrakhan echoing warnings from his teacher, the Most Honorable Elijah Muhammad, told world governments that it’s time to reap as they have sown. Governments and leaders are in a day of decision to choose to change or remain repressive, destructive, unjust and face destruction from God Himself, he warned.—Brian E. Muhammad, Staff Writer