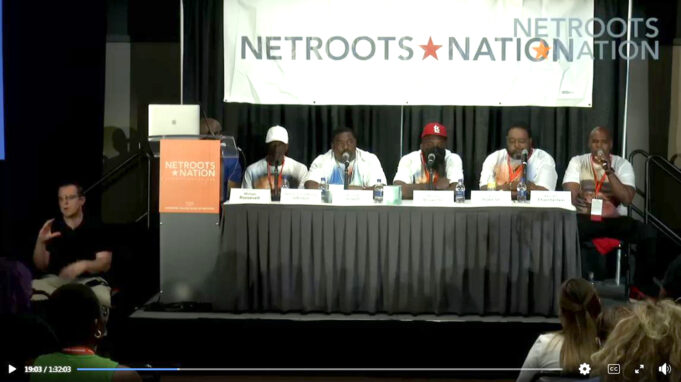 Black fathers, uncles, and sons who have been impacted by police violence often have a powerful story to share. These men have seen firsthand the deadly consequences of police brutality and racial profiling.  They know the fear and anxiety of being a Black man in America.  And they often must help their loved ones pick up the pieces after a tragedy.

While the stories of these men are often gut-wrenching, they also offer a unique perspective on the issue of police violence. By sharing their stories, these men help to raise awareness of the problem and spur change. In addition, they can provide support and comfort to others who have been impacted by police violence.  These Black fathers, uncles, and sons also make a difference by speaking out.

Each man had a unique story but shared a common thread of loss and grief. Mr. Johnson’s 22-year-old nephew, Oscar Grant, was killed by a BART (Bay Area Rapid Transit) police officer in Oakland, California, on Jan. 1, 2009.  Andre Joseph’s son, 14-year-old Andrew Joseph III, was struck and killed by a motorist in 2014 as he tried to cross Interstate 4 on foot after being wrongfully detained,

These five men all experienced the unimaginable—the loss of a child or loved one at the hands of those who are supposed to protect and serve. Yet they have found the strength to speak out and demand justice.

Their voices were powerful and silence filled the room as panelists began to speak, sharing their painful stories. On the stage, the five men sat, each with a different story of tragedy and loss.  Each man spoke intently, his expression grave as the audience listened.

The first was Kenneth Chamberland, who described how his father Kenneth Sr. was killed after accidentally triggering the life alert pendant he wore around his neck. “On November 11, 2011, my father was killed by the White Plains Police Department. They arrived at his apartment and demanded that he open the door.  The door was broken down as a result of his refusal.  He was tased with an electronic taser, shot with a beanbag shotgun four times, then shot with live rounds killing him,” Mr. Chamberland stated.

Next was Jacob Blake Sr., who described how his son Jacob Blake Jr. was shot seven times in his back in Kenosha, Wisconsin, by police. “My son walked away from him, never turning, being aggressive, and was shot seven times in his back in front of my grandchildren,” he said.  “At what point in time do we, as Black people, need to explain to White America that we are a part of the human race, that we are not animals? We’re not dogs. We deserve much more than what we get,” he said. “And we fight for justice for Black and Brown people all over the country.”

Michael Brown Sr. described what happened to his son Michael Jr., whose death sparked uprisings in the small city of Ferguson, near St. Louis. “Michael and a friend were walking down the middle of the street,” he explained.  “The officer pulled past him and told him to ‘get the F out of the street.’ The officer proceeded to stop his vehicle, put his car in reverse, and cut these teenagers off, asking my son to come to the car.  From that point, a struggle started; he shot Michael in the hand and blew his thumb off.  As a kid, you’re scared.  He took off running. The officer proceeded to get out of his car and asked Mike to stop. He fired seven shots into his body, making him fall face first on the ground,” said Mr. Brown.

Andrew Joseph Sr. then shared his story telling the audience in his opening remarks, “you know, it’s the hardest feeling in the world having to go to the graveyard to see your child.”  Joseph III attended the Florida State Fair on February 7, 2014 like many area youth. Tragically, he never made it home.

“He was an honor roll student and never had a discipline problem in his life,” Mr. Joseph explained. While at the fair, young Andrew went to inquire about some of his friends that had been detained at the fair by law enforcement.

“At this fair, he (Andrew III) was detained by the Hillsborough Sheriff’s department. The last picture of my child is a mugshot of him standing against the fence, holding the sign with his name and address on it.  They put my son in a police paddy wagon and abandoned him on the side of the road without a phone to call anybody.

As he was trying to get back to the fair, he was hit on Interstate I-4 by a 19-year-old White boy.  The driver wasn’t given a breathalyzer test.  He wasn’t given a ticket.  He was allowed to leave the scene with my son’s remains all over the front grill as if nothing had happened,” said Mr. Joseph.

The last to share his painful story was Mr. Johnson whose nephew Oscar Grant III’s life was brought to the big screen in the film, “Fruitvale Station.”

“On his way back from seeing the fireworks in San Francisco, Oscar tussled with an old friend on the train, and a White commuter said there was a Latino-Black gang fight.  This forced the train to be stopped.  A police officer named Tony Peroni came up on the platform with his taser out, overly aggressive,” he said.  Eventually, his nephew was thrown to the ground on his stomach.

“The knee Tony Peroni had on his neck was the same knee George Floyd had on his neck, which choked him out. There was a cry from Oscar that he couldn’t breathe.  Additionally, the officer was pushing his face through the concrete floor with both hands on his face. The bones in Oscar’s face were cracked,” said Mr. Johnson. Then Off. Johannes Mehserle joined Off. Peroni in detaining Oscar.

“Off.  Johannes is six feet seven, 270 pounds.  Peroni was six feet two, 250 pounds and Oscar’s only five-ten, 150 pounds. The 600 pounds of officers on his back were pulling on him as he struggled to put his hands behind his back,” he continued.  Eventually, Oscar was handcuffed, Off. Melhserle stands up, pulls out his weapon, and shoots Oscar in the back.  “As the bullet penetrates his body, it hits the concrete floor, bounces back up, and penetrates his chest, collapsing his lung and killing him,” shared Mr. Johnson.

“Let’s be clear about that.  Millions of people could view cell phone video of actual murder for the first time.  That took place. Oscar’s a flashpoint of the movement that we see today,” he added.

As the panel progressed, the men tackled substantive issues like caring for their mental health and community work.  They spoke candidly about their struggles with depression and anxiety and how they have found strength in their brotherhood.  They also discussed the importance of giving back to their communities and how they have been able to make a positive impact.

The men were frank and open in their discussion, and it was clear that they have a deep commitment to making life better for those around them.  It was an inspiring display of brotherhood and solidarity as these men continue working hard to make a difference in the world.

Mr. Roosevelt set the tone for the discussion, stressing the importance of the Black man’s struggle in America. “Historically, Black men have been maligned. Black fathers have been maligned. Black fatherhood has been denied, and this is not by accident. This is by design.  A concerted effort is to destroy Black families to eliminate the Black man,” explained Mr. Roosevelt.  This started with the enslavement of Africans, and it continues, he added.

“The fact that these men are still standing up is revolutionary.  It is absolutely revolutionary because the system is designed to break them down.”

Trauma and pain can be debilitating, making it difficult to function in everyday life.  For some people, therapy is essential to process and work through their experiences.  This is true for three of the men in formal treatment who shared their trauma and immense pain. Two of the men use their work as a source of therapy, finding strength and purpose in their ability to help others.  For these men, their work is a way to take control of their lives and feel empowered again.

There was a passion in each of their voices as they spoke of their community involvement.  Jacob Blake Sr. helped create the Families United Foundation, Michael Brown Sr. established the Chosen for Change Foundation, Kenneth Chamberland Jr. helped co-found the Westchester Coalition for Police Reform, and Andrew Joseph Sr. established the Andrew Joseph Foundation.  Mr. Johnson’s Love Not Blood Campaign hosted the event.

“When I look into these cats’ eyes, we all feel the same way,” said Mr. Blake, speaking about the bond the men share through tragedy. “So, there’s not a lot of talking to do. What’s important is support for those families, no matter what they want to do. Do they want to walk?  If they wish, they can release balloons or hold candlelight visuals. We take that message to those families,” he said of the support he tries to provide other families impacted by loss.

“What we do is real. We take real things to these families. We don’t receive paychecks for our work. We are all grassroots organizations. Our work can’t be sustained without your support, so if you throw a nickel or a dime at us, we put that quarter to work,” said Mr. Blake.