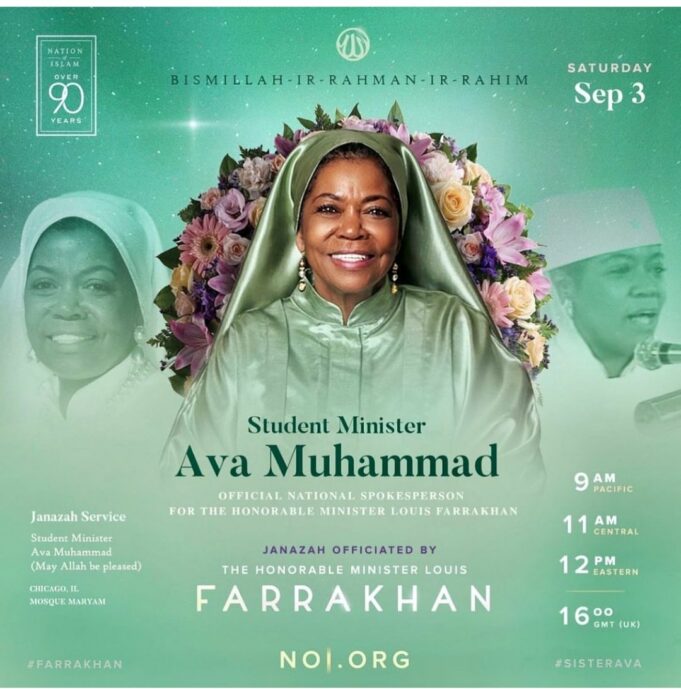 MOSQUE MARYAM— “Sister Ava is a star of God. … Her light was extinguished in death. But down through the ages, people are going to read what she wrote; listen to the words that she spoke and she’ll be making people see the value of what her teacher taught her—when all of us are turned to bones,” said the Honorable Minister Louis Farrakhan speaking during his Sept. 3 remarks on the life and legacy of Sister Minister Dr. Ava Muhammad, his Official National Spokesperson.

The doors to Mosque Maryam, at Nation of Islam headquarters opened an hour before the scheduled Muslim Prayer Service, known as janazah, and was officiated by her teacher, Minister Farrakhan. All in attendance stood in respect, as the family members of Sister Ava filed in to take their respective seats. Once seated an opening prayer, remarks and the obituary were read by the National Assistant to Min. Farrakhan, Student Minister Ishmael Muhammad.

“Indeed, we are all deeply saddened over the shock of the news that we received of the unexpected: The transition of Sister Student Minister Dr. Ava Muhammad. Our prayers and thoughts are with her husband Brother Darius Muhammad; her daughters Sister Cherelle and Sister Sasha, the grandchildren, the sisters of Minister Ava and her entire family,” he began.

“Nothing and no one can give us the peace and comfort we seek and need but, Allah. This is his irrevocable will. ‘Why Minister Ava? Why now?’ We have many questions. But in the final analysis, it is our faith in Allah and in what He permitted that can put our hearts and minds at peace.”

Her work was much sought after national speaker and her love for her family, friends and community. As you mourn the loss of Minister Dr. Muhammad, I hope you find comfort in her memory. Her legacy will always symbolize the values of hard work and integrity, community and compassion. Strength and humility. Please know that my thoughts and prayers are with all of you who knew and loved her,” the mayor’s statement concluded.

Give good news to the patient

Sister Ava’s daughter Sister Cherelle Muhammad brought the good news instructed in the Holy Qur’an as she mightily took the rostrum and shared reflections and commandments.

“My mom’s prayer and sacrifice, her life and her death were all for Allah. She gave her all,” she began. “She worked with every fiber of her being in this cause out of her desire to be pleasing to Allah. She always maintained a positive, high spirit regardless of any trials or difficulties she was facing. This gave her a natural magnetism that drew people to her,” Sister Cherelle acknowledged.

“She had a deep and profound love for the women and worked to uplift the sisters of the Nation of Islam and women in general. She always talked about how 75 percent of the work is with the women. Out of her profound love for women, she worked hard on the book, ‘Naturally Beautiful,’ staying up day and night; proofreading it several times to ensure that women and girls would have something in their possession to remind them that Allah made us naturally beautiful, despite how Satan’s world has characterized us,” added Sister Cherelle.

“She always made time to give good advice to women who sought her advice on personal issues or on their marriages or she would always give them a good word that would leave them in high spirits.”  She gave everything to the Nation of Islam and her family, Sis. Cherelle remarked. She willingly gave her time, talent, mind, spirit and gave “her very being to the Nation of Islam.

Whenever you talked to her, she was either going in a meeting with The Elevated Places team, working on study guides; proofreading books, getting ready for Friday night Study Groups or preparing for The Elevated Places radio show. She was all about the Nation of Islam,” she added.

“She would not want us to grieve over her loss. She would want you to fully embrace and be pleased with Allah’s Will for He is the Best Knower. She has ran her leg in the race. Now the baton is in our hands to carry on the work that she did. Let’s carry on the work to separate and reclaim our own! Let’s carry on to work and build a nation!” Sister Cherelle said as the audience clapped and stood to their feet.

She described the driving force in her mom’s life was her immense love for Allah, Who Came in the Person of Master Fard Muhammad; the Exalted Christ, the Most Honorable Elijah Muhammad and the Jesus in our midst the Honorable Minister Louis Farrakhan.

“Satan promises that he’s going to make all deviate,” Minister Farrakhan said during his remarks. “He did not get her,” he explained, pointing at Min. Ava’s casket. (Please read Min. Farrakhan’s remarks in the page 20 center article).

After performing the janazah prayers the entire audience present at Mosque Maryam gave a final “Original Salute” to their Dear and Beloved Sister Ava Muhammad. Then the Honor Guard comprised of men and women of the Nation of Islam escorted the casket down the aisle.

After the internment, a repast was held at Muhammad University of Islam. The gymnasium was filled with the aroma of a delicious meal, and the atmosphere was one of love and reflection. Sister Ava was an incredible woman who made a lasting impact on the world.  Her loss is truly bittersweet, but her legacy, as Min. Farrakhan said, will live on forever.

The love that we have for our beloved Sister Ava is beyond words, shared Bro. Abdul Rasul Muhammad. “We give Allah praise and thanks for her life and her legacy as she has been a part of the fabric of my Islamic life from the early beginnings. It was Sister Ava that taught me the principle that we should always be prepared to stand and preach the lifesaving, life-giving, mind altering Teachings of Our Eternal Father, the Most Honorable Elijah Muhammad as taught by our Beloved, the Honorable Minister Louis Farrakhan all over America and throughout the entire world. With only a moment’s notice, we must always be prepared to share Our Invincible Truth, said Bro. Abdul Rasul.

“I had the distinct honor of being on her Elevated Places Program on November 11, 2021, as we discussed and celebrated the life of our Dear Brother Damon Muhammad and I had the opportunity to tell her how much I loved, honored, treasured and appreciated her. God is good all the time,” said Bro. Abdul Rasul. “May Allah continue to bless her rich legacy and may Allah continue to bless her entire family in every possible way.”

She was the consummate soldier and defender of Minister Farrakhan, the Teachings of the Honorable Elijah Muhammad and our suffering people, said Bro. Naba’a Muhammad.

“She commanded my deep respect and admiration. I told her on several occasions I would gladly follow her as a soldier going to war. She was committed, gifted, fearless and an example of the best among us as Muslims and the best among Black women,” he said.

Sister Ava, he added, was a reminder of how over generations Black grandmothers, mothers, aunts and sisters cared for us. “She was a special person and a special servant,” added Bro. Naba’a.  It is our duty to help look after her family, children and grandchildren, said Bro. Naba’a.

The repast opened with a prayer from Executive Council member and Nation of Islam General Counsel Abdul Arif Muhammad as pictures of Sister Ava flashed on a giant screen, highlighting the life and times of this great woman.

The Minister, as gracious as ever, made a brief appearance asking the audience for forgiveness, having delivered the eulogy followed by a trip to the burial.  He departed to get some rest.

Min. Farrakhan’s poignant message resonated with many who attended the services.  Yolanda Bankhead, a niece of Sister Ava still dealing with grief, stopped for a short interview with The Final Call.  “What Minister Farrakhan had to say was beautiful; that’s all I can say.  Yeah, beautiful.  My aunt taught me to walk like a woman of Allah, God, with strength. Yes.  Encouraging, positive headstrong, a mother, a wife. A strong woman,” she said.

“Our Minister, by the Grace of Allah, in the Messianic position that he represents, elevated our sister in an unprecedented way among the student ministry in the Nation of Islam.  She was one of the greatest, no, the greatest defender of the Honorable Minister Louis Farrakhan in the Nation of Islam.  She will forever be cherished in our hearts,” said Imam Sultan Rahman Muhammad, a great-grandson of the Honorable Elijah Muhammad and member of the NOI Executive Council.

“She is in the representation of the stars where the Honorable Minister Louis Farrakhan said of her that stars die, but they don’t die.  Their light shines on and shines on for trillions of years.  So, we pray to Allah that He consoles the family with peace of mind and heart in this time of mourning.  We thank Allah for the Honorable Minister Louis Farrakhan and the tremendous words he gave us today.

He spoke for an hour and 37 minutes.  Praise be to Allah!  So, what a blessing to have our sister be a catalyst for yet another life-changing message from the Honorable Minister Louis Farrakhan.  We thank Allah for her.  Yes.  Her work and all that she’s done,” said Imam Sultan Muhammad.

Student Minister Dr. Wesley Muhammad also a member of the Executive Council also reflected on his colleague and friend.  “She was such an asset, a great ‘shero’ not just to the Nation of Islam, not just to the Black nation, but to me personally, so much that I named my first-born child, my daughter after my shero, Ava Muhammad. She was trailblazing, she was iconic, and she illustrated the potential of God in female form.”

Sister Minster Dr. Ava Muhammad leaves to cherish her memory and carry on her legacy, her husband of 33 years, Brother Darius Muhammad, their daughters, Sister Sasha and Sister Cherelle, grandchildren, Amir and Amirah, sisters, nieces, nephews, a host of family, friends and the entire Nation of Islam.

Michael Z. Muhammad and J.A. Salaam contributed to this report.