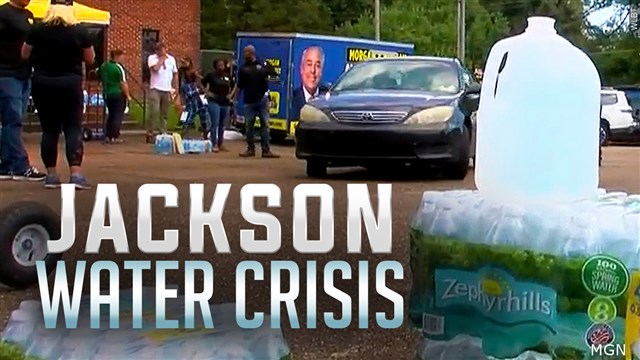 As many as 180,000 people in Jackson, Mississippi will not have access to safe running water for the foreseeable future, state officials said on the night of Aug. 29—the latest manifestation of a longstanding crisis in which the city’s residents have been made to suffer the consequences of chronically underfunded infrastructure, compounded by a worsening climate emergency.

Reeves, a Republican who has refused to prioritize upgrading Jackson’s failing infrastructure throughout his two years in office, declared a state of emergency and announced, “We need to provide water for up to 180,000 people for an unknown period of time.”

“This is a very different situation from a boil-water notice,” Reeves continued. “Until it is fixed, we do not have reliable running water at scale. The city cannot produce enough water to fight fires, to flush toilets, and to meet other critical needs. The Mississippi Emergency Management Agency will take the state’s lead on distributing drinking water and non-drinking water to residents of the City of Jackson.”

Jackson—a majority-Black city where roughly a quarter of residents live below the poverty line—had already been “without clean, drinkable water” for weeks, Mississippi Free Press reported on Aug. 29, referring to the rolling precautionary boil-water notice issued by the state health department amid the ongoing winterization of the O.B. Curtis Water Treatment Plant.

Now, Mississippi’s capital has “mostly lost water pressure, with operational collapses at O.B. Curtis reducing the flow of water through the city’s distribution system to the degree that residences and businesses across the city have little or no water at all,” the nonprofit news outlet noted. Whatever water does come out is unsafe and must be boiled for a minimum of three minutes.

Jackson Mayor Chokwe Lumumba blamed the loss of water pressure on floodwaters, saying during a briefing on Aug. 29 that the increased intake of water from the Ross Barnett Reservoir had caused failures at the treatment plant.

According to Mississippi Free Press, “A lack of visibility at O.B. Curtis has Mississippi State Department of Health leadership unable to answer how much water is currently flowing out of the plant and into Jackson’s pipes.”

On Aug. 27, Lumumba urged residents to “get out as soon as possible” after days of record-breaking rainfall caused the Pearl River to rise to dangerous heights. The river crested at nearly 36 feet on Aug. 29—well above flood stage—inundating streets and at least one home in the city before starting to recede.

While the recent flooding—an example of the kind of event that scientists have long warned will become more common and intense due to planet-heating emissions—has made the situation worse, “we didn’t get to this total crisis point overnight,” journalist Ashton Pittman wrote Aug. 29 on social media. “It’s been decades in the making,” he added. “This is the predictable result.”

This isn’t the first time that an extreme weather disaster has exacerbated Jackson’s water woes.

O.B. Curtis is undergoing a winterization process because last February and March, most of the city’s residents were forced to endure an entire month without clean running water—during the Covid-19 pandemic—after a historic freeze damaged systems that Lumumba said were never intended to withstand “days of ice storms and sub-zero temperatures.”

In an effort to improve its aging infrastructure, Jackson voters in 2014 approved a one percent sales tax increase, but that levy raises just $13 million in annual revenue—a small fraction of the $1 billion Lumumba says the city needs to fix its water system.

Sen. Roger Wicker was Mississippi’s only Republican member of Congress to join Rep. Bennie Thompson (D) in voting for the IIJA.

Last February, Reeves acknowledged that Jackson’s water problems can be attributed to “50 years of negligence and ignoring the challenges of the pipes and the system.”

“That 50 years of deferred maintenance is not something that we’re going to fix in the next six to eight hours,” he added.

But rather than doing everything in his power to push for the investments needed to ensure that Jackson’s residents have guaranteed access to clean drinking water, Reeves has advocated for completely eliminating the state income tax, signing a $524 million tax cut earlier this year.