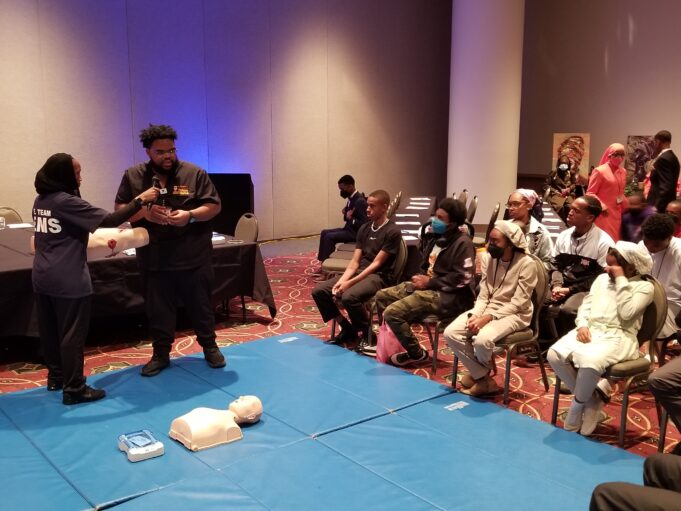 The weekend was packed with insightful workshops, with an entire youth workshop schedule.

The Youth Division was supervised by Lisa R. Muhammad and was facilitated by a talented group of young Muslims including: Madinah Muhammad, Nyah Muhammad, AnNura Muhammad and Khaliq Muhammad. The youth presented workshops, as well as moderated sessions and commanded the information technology (IT) side of the workshops.

“This is called the bling-bling generation, we got the gold, we got the ice, so all of that fits where it is written of us,” Student Minister Ishmael said. “Joshua is distinguished because he comes after Moses but is blessed to be in the presence of Moses, but he was resolved in his mind to carry out the will of God.”

He continued, “Because he submitted himself to God, then God could use Joshua and those of his generation to cross the River Jordan, to bring down the walls of Jericho, and take possession of the land, that God had promised. Joshua is a prototype of The Messiah, which means Joshua had to face Satan, and have the courage to not only face him, but to defeat him.”

In response to those words, youth moderator Nyah Muhammad shared: “I am inspired by your statement, obedience and submission to Allah is so crucial. If we want to claim the title of the Joshua Generation, we have to be obedient to Allah.”

Social media is a communications tool that many children and adults use regularly. Student Minister Ishmael gave guidance on the proper usage of social media when asked by an audience member.

“Technology is now at your service, it’s to serve you,” he said. “Now with your ideas and what you know is the will of God for your people and the program of the Most Honorable Elijah Muhammad, you have the duty and responsibility to use the technology and the instrument that Allah has permitted; use it to serve the Will of God.”

Celeritas Muhammad, martial artist and trainer, facilitated the workshop, “Bullying … Recognizing, Addressing, and Defending Yourself Against It,” stated to the captivated youth: “Bullying in a nutshell is unwanted, unwarranted aggressive behavior toward somebody that they feel they have power over. It’s really about an imbalance of power. Anybody that is bullying you, really believe that they have some kind of power over you.”

Brother Celeritas continued, “The Nation of Islam is this little microorganism that is pretty much being bullied by everybody else. Everybody is pretty much against us but us, and they are systematically against us, educationally against us, they’re just against us. We are always the underdog but with Master Fard Muhammad, the Most Honorable Elijah Muhammad, and the Honorable Minister Louis Farrakhan, we are absolutely a beacon of light.”

“There are major arteries in the leg, as soon as you come across someone who has been shot, and you have determined that they were shot in the leg, call 911, and then look for the bullet hole, compress or put pressure on the wound, at the highest point of the wound (toward the heart), lessen the bleeding as much as possible,” Dr. Pratt said.

The participants were able to practice CPR techniques on mannequins and were given the opportunity to practice packing a wound and applying a tourniquet to stop the bleeding.

“I liked everything about the workshops and everything Minister Farrakhan said,” he said. The Minister addressed the conference July 30.

Amaron Randell, 12 years old from Chicago, shared his excitement about the conference.

“I’m excited about the workshops and my experience with this year’s training conference has been amazing,” he said.

Other workshops the youth had the opportunity to engage in were:

 “The Sajdah House Project: A Manifestation of Doing for Self,” presented by Sajdah Wendy Muhammad, proprietor of The Honorable Elijah Muhammad House (Sajdah House), with a question-and-answer session moderated by AnNura Muhammad and Nyah Muhammad.

 “Words, Rhymes, and Wisdom: Respect the Intellect and Articulate,” a cultural roundtable discussion with questions and answers moderated by Khaliq Muhammad and Madinah Muhammad.

(Shawntell Muhammad can be contacted at [email protected].)