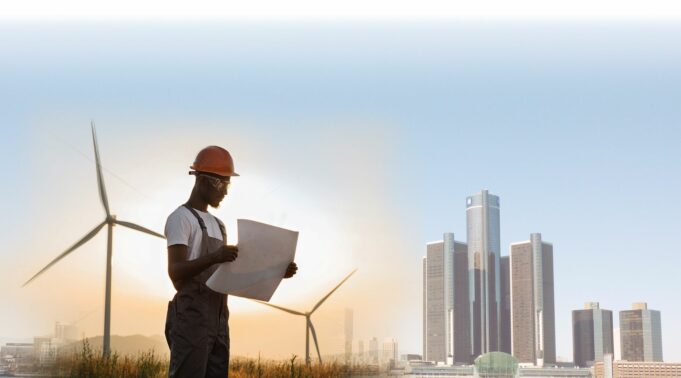 [Editor’s note:   The following article contains excerpts from the Honorable Minister Louis Farrakhan’s keynote address titled “Policies for Empowerment: The Struggle for a New Economic Order” which he delivered March 10, 2006 at the National Black People’s Unity Convention held at Westside High School in Gary, Indiana.  To order this message in its entirety on DVD and CD, please call 1.866.602.1230, ext. 200.]

If you really study the educational system, it was never designed to cultivate the talent within the human being.   True education cultivates what God has put within so that it comes out to glorify God and better the person, the family, the community and the world.

There is no seed planted in the proper environment, that gets the nourishment of water and sunlight, that doesn’t burst forth sending a root down and a shoot up that you may know exactly what was in that seed.   So many human beings, Black, Brown, Yellow, Red and White, live and die and never become acquainted with the greatness of their own being because the educational system was never designed to acquaint you with your greatness; but, to fit you into a socioeconomic, political paradigm where you actually are slaves.

Without the proper requisite knowledge, “education,” we will never have what is called “economic empowerment.”   But one of the challenges that we face is that the educational system is a failure.   It is designed that way so that the masses of Black people and the poor will always fit into a socioeconomic paradigm where they will never be the top “10 percent”–they will always be the 85 percent, that the 10 percent literally live from them in order to remain rich at the expense of the Black and the poor.

Let’s look at Gary, Indiana:   Gary once was a thriving economic, industrial-based metropolis.   But not long after the first Black mayor was elected, the tax base of entrepreneurial skills moved out to other cities like Schererville and Merrillville, and that left us well educated, but never truly educated to step up to provide the goods and services that the people of Gary need.   So we then had to take our money to Schererville, Merrillville; and Gary, as a city, began to die.

Now look brothers and sisters, this is not an “accident.”   Black people all over America and all over the world:   There is something wrong in the way we have been trained in a White Supremacist educational, religious, political and sociological environment.   You have never been trained to succeed.   However, a few of us do succeed only to sell “the lie” to the masses that “the system works for all.”   We must never sell that lie to another generation of Black children that this “system” works for all.   It does not!   Stop telling your people that “if you work hard, you will achieve.”   If you work hard, you will achieve if they open a door for you to achieve.

And the door doesn’t open for everyone …   Evidently, that’s a fact if statistics reveal at least 30 percent of the children who graduate are graduating as “functional illiterates.”   Something is wrong with that educational picture, so we can’t trust a system of education like that.

‘Politics’ without economics is ‘symbol’ without substance

What is the education challenge?   As our Black boys and girls–particularly our boys–are leaving high school, the challenge is to acquire an education which will enliven us to do business.

But for we who are made in the Image and the Likeness of God:   Something is wrong with this picture if you don’t know how to make something happen for yourself.   And if White people don’t make it happen for us, then we want to “picket,” we want to “lay down,” “sit in,” “crawl in,” “wade in”–no!   Nobody respects a beggar!   You have the ability; you have the capability, to do something for yourself.

We have Black mayors, which is a blessing; we have Black congresspersons, Black sheriffs, and Black city councilmen.   We have wonderful political progress in one sense, but “politics” without economics is “symbol” without substance:   So what good is it to be the Black mayor over somebody else’s reality, where if you don’t govern their reality right they move you out?   Travel to Africa, and tell me if I’m lying!

So “the challenge” is to create a New Educational Paradigm.   It is not outside of our grasp to do that because this educational system is a failure.

Don’t worry about trying to “transform” it.   Forget it.   It was never designed to serve you well.   Educational philosophers such as John Dewey, Immanuel Kant and Georg Hegel:   These were racists, White supremacists.   They didn’t want to educate you to be “equal” with them!   You must be educated to continue to look up to them, to serve them, to bow to them, to acquiesce to their scholarship–never to be independent, never to think independently that you can do something without their blessing.   Like a true slave… This is not a “Southern” mentality, this is a Negro mentality:   That you’re always thinking of what’s going to please somebody else rather than what will be pleasing to you and your children and our future.

This is why in 2005, during the Millions More Movement, we proposed a “Ministry of Education.”   Jesus said it best, “He who would be great among you, let him be your servant or your minister.”   There’s enough knowledge among us that if we took our brilliant minds, we could develop a new system of education that would free not only our people, but free the Hispanics, free the Native Americans, free the poor White people who are still languishing under this kind of racist, White supremacist messed up educational system. It needs to be “canned.”

The Challenges we face to empower ourselves

The Education Challenge:   The methodology and psychology of this archaic educational system is unfit and ill-prepared to deal with the new minds that an information society is producing.   When you send your child to school, and he’s very “rambunctious,” educators will tell you, “Mother, you must come up to the school because your child is presenting us with a problem.   We think he needs some Ritalin…”   According to published reports, scientists did a chemical analysis of Ritalin, and said it has the same effect on your system as cocaine.   So because the teacher can’t cope with the new mind, you dumb it down so you can “deal” with it.   This is a system that must be thrown in the garbage pail.

But you do have the courage.   See, don’t talk about “Farrakhan’s courage”–that’s there!   I’m talking about your courage, now.   Do we have the courage to sit down in a room and craft an educational system that can suffice the intellectual needs of our children and other children?

If they say, “Well, you can’t do that in our school building!”–when did it become “yours” and not mine, since my tax dollars help to support it?   Don’t tell me that we can’t take over the schools!   Don’t tell me we can’t put a system in that truly educates!   And if they fight us, then that’s worth fighting for because there comes a point in life where you have to draw the line!  You’re going to die anyway. The only way we can escape death is to escape having been born; so since you didn’t escape birth, at some point in time all of us have a “rendezvous with death” as a destiny.   So the question is:   How are you going to live the life that God gave you, and what will we pass on to a generation that comes after us, that is at our foot?

Parents, grandparents:   You see what’s happening to our children and our grandchildren!   Must we continue like this?   Or, should we take a stand and do something better, do something different?   That’s one of the challenges we face.

The Job Challenge:   If you live in a society that outsources jobs to cheap labor markets overseas, and everything that we wear now–which 35 or 40 years ago was “Made in America”; but now is made in China, Taiwan, Indonesia, Malaysia, somewhere else, not America–well, what happens to the “functional illiterates” who graduated from high school last year?   What happens to the people who are dropping out of high school?   What kind of job can they get?

Do you think you can stand around here waiting for the U.S. government to create more jobs for you?   What kind of job will they create for your children?   The price of gas is going up; the price of heating fuel is going up–the cost of living is going up, but wages are going down, or remaining the same.

The Economic Challenge:   Thousands upon thousands of jobs for the working man, the middle class, are being wiped out.   What chance do our young people have in an economy that’s dying right in front of our face?   So the challenge is do we sit around and wait for somebody else to provide a job for an ever-shrinking job market?

The stock market has a limited lifespan, too!   So all your pension funds put into what you think are “safe markets”:   If the bubble bursts, like it did with Enron and the corruption at the top, then what happens to your pension fund?   And now you can’t get medical attention, you can’t get medical insurance because they have to cut that back.   If you want a job at any given company, you have to take “cut backs.”

Well, what do we do with these huge pension funds that American workers have put aside that they loaned to companies to take their jobs out of America and take them overseas?

Here, I present some of “the challenges,” but also a suggestion.   See, we’re not really “poor,” we’re just poorly guided.   Suppose we recognize that we have millions of people that eat, but they are dying from poison food?   Most of us are very toxic and don’t even know it because the food in agribusiness is more “for profit” than for the health and well-being of the American people.   And, of course, there was a time when we had 21 million acres of land as Black people; now we’re down to less than three million.

Somebody else is producing that for us.   And by the time they get finished with the dough, taking the real nutrients out it, then you get denatured food–and then they send you to the health food store so that you can buy supplements that they’ve taken out of the food and put in a pill!

We have to see that this whole paradigm is destructive to us and poor people, and we might as well get ready to do something for ourselves.   So our challenge is to create opportunity for our children as other intelligent people are doing for theirs.   And when we do that, the world will respect us and honor us as we honor every people that do something economically to feed, clothe and shelter themselves.   They make products to serve their own and sell the surplus.   This is what we have to do.

Let’s produce something in our lifetime, something that forges a new direction, so that our children and our grandchildren will praise the fact that they belong to us.   And as we stood on the shoulders of others, that they will stand on ours and do that which will glorify God and bring joy, peace and justice to our people and to all who are oppressed.

Thank you for reading these words.