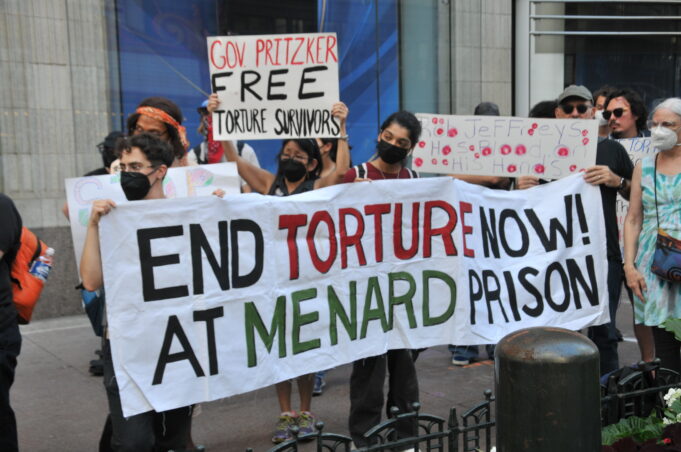 CHICAGO—Hadi Abuatelah, 17, had to stand with a walker to see a judge at the Cook County Juvenile Detention Center on August 2 after being hospitalized for four days.

The Palestinian American teen’s family and the Council on American-Islamic Relations Chicago filed a lawsuit August 1 against police and the Village of Oak Lawn. The lawsuit alleges that Hadi was mishandled by police and as a result suffered great bodily harm and emotional and mental distress.

According to the lawsuit, Hadi was a passenger in a vehicle police pulled over in Oak Lawn on July 27. The teen says police attempted an illegal search on him but the police counter it was because they smelled marijuana on him.

Dashcam from a police car shows the teen darting off and police pursuing him before he was caught and pinned to the ground. Police allege that Hadi had a gun on him and was reaching for it.

The lawsuit says the teen was beaten by two police officers, which can be seen from footage captured by a witness. Hadi spent four days handcuffed to a hospital bed as he suffered from internal bleeding in his brain, a fractured pelvis, broken nose, punctures to the skin and bruises.

The teen’s mother, Dena Natour, said that police tried to kill her son.

“What did he do that you all are beating him to death?” she asked of police during a local television news report.

Family and supporters of Hadi gathered outside the Oak Lawn Police Station demanding justice for the teen August 5. Many have also expressed their support using the hashtag #JusticeforHadi on social media.

Jennifer Oslowski wrote on Twitter, “This makes me absolutely sick!!! Are charges being filed on these so called police officers??”

On Facebook, R.A. O’Leary wrote, “What the hell happened to the PRESUMPTION OF INNOCENCE? Is it BATTERY if a policeman beats up a person who is later found innocent? LOOKS LIKE BATTERY TO ME.”

One of Hadi’s attorneys, Zaid Abdallah, said the officers who beat him should be suspended and fired. He told CBS news that the incident was a “disgusting act of hate and malice.”

Oak Lawn Police Chief Daniel Vittorio told local news that the police were acting within their rights and that the police officers should not have waited to see if Hadi would have fired with the gun police allege was on him.

According to local news reports, Hadi, who was released from custody August 2, has not yet been charged. Prosecutors also asked for a 3-week delay while the charges are being weighed.

The officers involved in the incident have not been suspended.