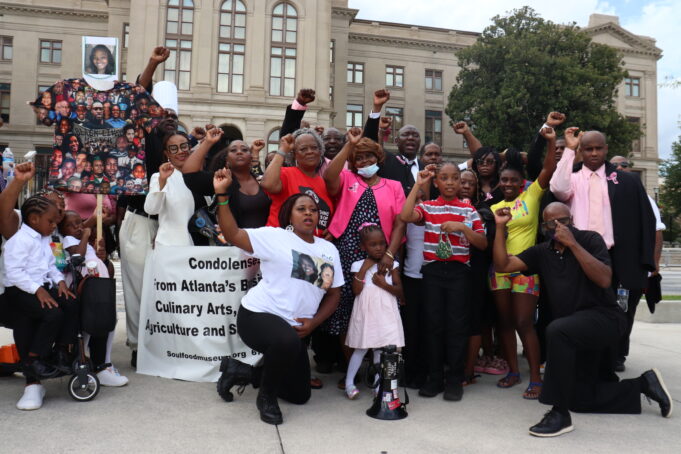 ATLANTA—“Say her name: Brianna Grier!” chanted protesters at the Georgia State Capitol in Atlanta. Family of Brianna Grier, along with local and national activists, gathered at the park facing the capitol on Aug. 11 to demand justice for the 28-year-old Black woman.

Brianna Grier’s mental health crisis turned into a death sentence when she was arrested on July 15. Her mother, Mary Grier, called the Hancock County Sheriff’s Office to get assistance for a mental health episode. Instead, deputies detained Brianna Grier, cuffed her and then transported her without a seatbelt. Ms. Grier fell out of the moving patrol car, causing two fractures in her skull, according to the Georgia Bureau of Investigation. She went into a coma and died in the hospital six days later. Authorities say the passenger door was not fully closed.

“If we had known that that was going to happen, we would’ve kept her at home. We were only calling them for help. We knew what she was going through. We needed help. That’s all we were asking for,” said Marvin Grier, Brianna Grier’s father, to The Final Call. “But in reality, it didn’t come to help. It came to death.”

The family held her homegoing service Aug. 11 at West Hunter Street Baptist Church and held a rally at the state capitol immediately afterward..

Brianna Grier was the daughter of two loving parents, the sister of several siblings and the mother of three-year-old twin daughters. Her sister, Lottie Grier, described her as a loving, caring person with a big heart. “I’m going to miss Brianna,” she said, tearfully.

“The program says that we come to celebrate her life, but we also come to condemn her passing. We ought not act like we’re here under a natural circumstance,” voiced Reverend Al Sharpton, who gave Brianna Grier’s eulogy.

He noted that police are expected to put their emotions aside and be trained in a manner of sustaining life, not taking life. And if they can’t do that, they should quit, he said.

Attorney Gerald Griggs, president of the state conference of the Georgia NAACP, feels what happened to Brianna Grier is a grave injustice. He told The Final Call that it’s incumbent to fight back.

“That’s why we’re here outside the state capitol, to bring her memory and her family directly to the only place where we can actually get some semblance of accountability. We never get justice in these cases. We get accountability. Justice would be Brianna being with us,” he expressed. “And so we brought the family, united them with other families that have been suffering injustice here and made sure the governor, the people in power understand we’re not going away. We’re going to get accountability for Brianna.”

Georgia NAACP helped fight for Ahmaud Arbery, who was murdered by a White father and son February 2020. The duo was sentenced to life on Aug. 8. The man who filmed Mr. Arbery’s death was sentenced to 35 years.

Mr. Griggs noted that the rally was intended to put pressure on elected officials.

Marcus Coleman, a community activist and founder of the Atlanta Chapter of the National Action Network, told The Final Call they will continue to fight for justice.

“Her family is now in a fraternity and a sorority that no parent wants to be in. And there’s not much here to be said,” he expressed.