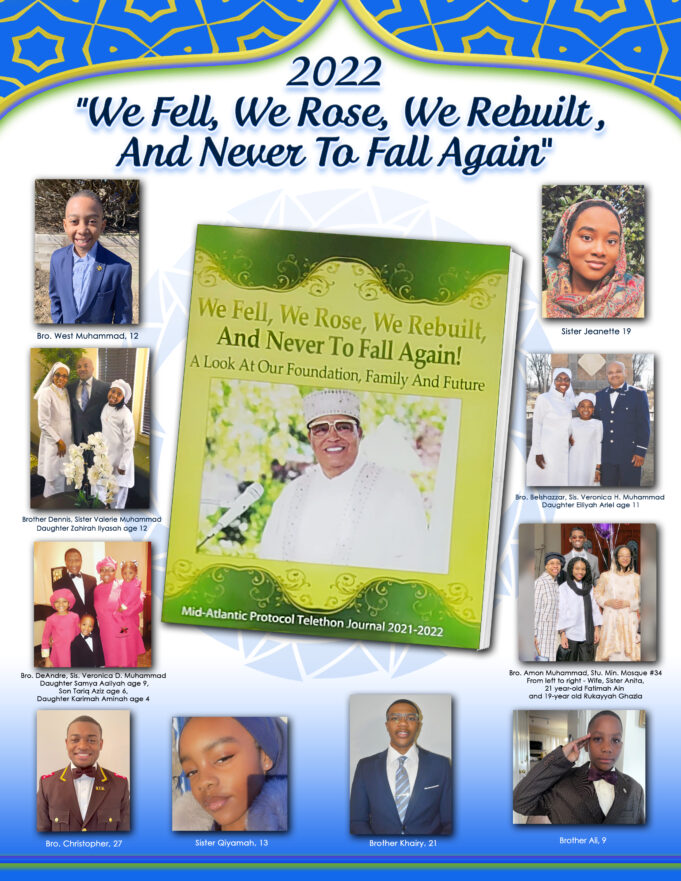 Uncovering 80 years and beyond of the Mid-Atlantic Region history

Registered in the Nation of Islam in 1955, 90-year-old Aqueelah Rashid Muhammad, formerly Lilly 3X of Mosque No. 7, who currently attends Mosque No. 38 in Columbia, S.C., recalled meeting Mother Khadijah Farrakhan at their first MGT Class in New York. The MGT and GCC (Muslim Girls Training and General Civilization Class) are the women of the Nation of Islam.

“We were both excited about our class and we kept checking to make sure that we had our books,” said Sister Aqueelah. “And I remember being so happy when the Most Honorable Elijah Muhammad’s instructions to any Believer who had been in the Nation of Islam 17 years or longer could have their name. I acted immediately and took the name Aqueelah Rashid,” she added.

Nine-year-old Ali Kamau Muhammad opened up the virtual program with the Al-Fatihah prayer in Arabic and English, which was followed by 13 youth history moderators and responders representing Muhammad University of Islam, home schools and college students.

“Our Nation of Islam is presently spinning the yarn into one fabric tightly knit together so that it will never fall again. Who are we that God would visit Us? We are the stone that builders rejected. God wants to make us the Headstone of the Corner,” said the Honorable Minister Louis Farrakhan on February 24, 1991 at Christ Universal Temple in Chicago.

Mid-Atlantic Region Student Minister Abdul Khadir Muhammad said, “We must become so tight that the enemy will flee from us. We are on our way to the top. Who are we? We are becoming, by the help of Allah, the wisest people that ever lived on the face of this Earth. We have Allah in the Person of Master W. Fard Muhammad, the Supreme Being, we have the Most Honorable Elijah Muhammad as the Guide, Mahdi, and the Honorable Minister Louis Farrakhan as the Messiah whose cup is so full that it runneth over.”

Brother Omar of Mosque No. 38, formerly known as Brother Leonard 11X, noted, “I met the Most Honorable Elijah Muhammad in 1967 in Chicago and He would always say, ‘Brother, it is good to keep yourself busy. If you are sick, work; if you are broke, work.’ The Messenger hired me as the maintenance man at his apartment building and two years later, he asked me to drive him around. In 1971, The Messenger gave the Believers their new name!” he shouted out.

Believers from as far away as New York congratulated the young people on their outstanding performance and precise recordation of history during the virtual program.