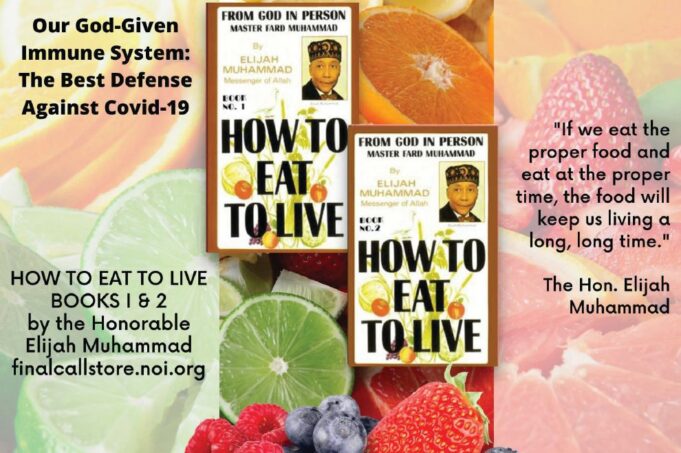 “If you’ve taken the shot, I pray that Allah will lessen the effect of that shot because it was designed to harm you, your ability to reproduce yourself. But if you ask Allah to save you from what you did against yourself, call him by the Name ‘Allah, Who Came in the Person of Master Fard Muhammad,’ and ask him ‘in the Name of the Honorable Elijah Muhammad’ and I do believe, even if you’ve made that mistake, He’ll save you from the mistake that you made.”

On August 4, South Africa’s health regulator reported “a causal link between the death of an individual and Johnson & Johnson’s COVID-19 vaccine, the first time such a direct link has been made in the country,” reported Reuters.com. The deceased, whose identity remains undisclosed, suffered the rare neurological disorder Guillain-Barre Syndrome soon after being given J&J’s Janssen vaccine, after which they were put on a ventilator and later died, according to senior scientists during a news conference. “At the time of illness, no other cause for the Guillain-Barre Syndrome (GBS) could be identified,” said Professor Hannelie Meyer.

In July of 2021, U.S. authorities added a new warning to a factsheet saying data suggested there was an increased risk of GBS in the six (6) weeks following the J&J shot. At the time it noted 100 preliminary reports of GBS in vaccine recipients, including 95 serious cases and one reported death.

Meanwhile, a growing number of vaccine recipients are expressing post-jab regrets. Some have long ago recovered from a bout with coronavirus, but one year later are still grappling with severe harmful effects of the shot.

One member of this tragic group told The Final Call that within eight (8) hours of receiving Pfizer’s COVID-19 injection on April 12, 2021, she woke up from sleep to a nightmare. Shiara DeLoach of Houston, Texas, was paralyzed. Over the next year, she said, she struggled to regain use of her body, despite horrific treatment by healthcare providers. At first, she could only move her eyes. Then, just her head.

“I saw my phone on the nightstand and had to cry myself to sleep, praying to God, because I couldn’t reach it,” said Ms. DeLoach. “I have a regret, because they’re not being honest about this vaccine, whether it’s Moderna or Pfizer. If they would have been honest and said there‘s a possibility that you can end up permanently paralyzed, partially paralyzed, or you can end up dead or whatever, there‘s no way in the world I would have taken the injection,” she stated.

She took the shot, because she caught COVID and spent a gruesome four days in the hospital in January 2021. But 20 minutes after the injection, she complained of pain in her shoulder, neck and center of her head. Ultimately, she lost 75% mobility on her right side, along with tremors. “They have snatched my commercial driver’s license. I had a Class A truck driver’s license for over 30 years, over 200 million miles safe driving, accident-free.

There’s a whole lot of stuff I’ve lost,” she said. “Do I recommend people go out and get this injection? No! But you have to make your own decision. I feel that you should at least keep your immune system built up and very clean. Take the necessary precautions, because it has already been proven that this vaccine is not the answer.”

She chose hyperbaric chamber (oxygen) therapy, turning to Sister Eugenia Muhammad, owner of Jewelryapy, who created a custom bracelet that addressed what she felt were Ms. DeLoach’s most important issues—detoxing the body, brain and nervous system of the vaccine. Within 2-3 days of wearing the bracelet, Ms. DeLoach said she was moving areas and parts of her body which she hadn’t been able to move in a year. “It’s been great! I can tell the difference! … I’m doing 80% better than what I’ve done all year, because I still have weakness and stiffness on this right side,” she stated.

“I am helping her to reverse the effects of COVID, first and foremost, by Allah’s Grace & Permission and with His Guidance. I used gemstones, which have therapeutic properties, to help restore balance in the chakras (energy centers that correlate to the endocrine/glandular systems) of her body,” Ms. Muhammad told The Final Call in a written statement.

(Important Note: The Nation of Islam has not researched the specific treatment mentioned in this article; this is a report regarding the harm from the vaccines. We are also reporting what a vaccine-injured person states she has done to overcome specific adverse effects and what has worked for them.)

As to treating effects of the virus, “If you do get sick, you call us. We’ve got the therapy,” stated the Honorable Minister Louis Farrakhan, in his message, “The Swan Song,” on Saviours’ Day, February 27, 2022.

The Nation of Islam recommends Ivermectin, Nigella Sativa (also known as Black Cumin Seed or Black Seed Oil) and an antiseptic gargle mouthwash as anti-viral and antiseptics prevention and treatments in its “COVID-19 Practical Steps for Self-Care: What You Can Do to Protect Yourself” initiative. Strengthen your God-given immune system by getting plenty of fresh air and exercise. Take vitamins D3 and C, Quercetin, and Zinc. Above all, follow the dietary regimen given to us in How To Eat To Live (Books 1 and 2), by the Honorable Elijah Muhammad.

In addition to the anti-parasitic drug Ivermectin, cited as number three in the Front Line COVID-19 Critical Care (FLCCC) Alliance’s post-vaccine treatment protocols, Dr. Christina Parks, who has a Ph.D. in Cellular and Molecular Biology, said getting the gut microbiomes working is a crucial first step. That can be done simply at home, just by eating some soup, she stated.

She also recommends cumulative steps to build the immune system, such as taking Vitamin D, Magnesium salt baths, even getting cool morning sunlight.

“God already designed our bodies to heal. We’re just trying to give them what they need. And since everybody’s a little different, sometimes that can be complex,” added Dr. Parks, founder of the Vaccine Injury Treatment Alliance (VITA).

The FLCCC, founded by pulmonary and critical care specialists Drs. Pierre Kory and Paul Marik, lists daily intermittent fasting as number one on their I-RECOVER Post-Vaccine Treatment list, because it helps breakdown and eliminate the spike protein. “It’s likely that ivermectin and intermittent fasting act synergistically to rid the body of the spike protein,” the online protocol indicates.

Another big find by FLCCC are second generation antihistamines, such as over-the-counter Zyrtec (used for allergy symptoms) according to Dr. Parks.

Paximune (Alpha Inteferon) and Suramin (synthetic drug used in the treatment of sleeping sickness) would have stopped COVID, said Dr. Judy Mikovits, a Ph.D. in biochemistry and molecular biology.

The problem is Suramin, which was used to recover children with autism, is no longer made, according to Dr. Parks. “When they found out it worked, they stopped making it,” she said. She predicts Satanic forces may try to stop Ivermectin and Hydroxychloroquine the same way, but luckily, both are in lots of countries worldwide. Still, the wicked could apply global pressure, she added.

“These are 100-year-old essential medicines, and they knew this when they continued to weaponize the virus to evade the stronger,” said Dr. Mikovits, who is Caucasian. She explained, Black people have a stronger immune system because their Vitamin D sensors act as amplifiers, but in White people, they act as resistors.

Minister Farrakhan saved millions of members of the Nation of Islam just by saying no, Dr. Mikovits emphasized.

During “The Swan Song,” Minister Farrakhan told Black people not to take the “vaccine,” before it was made. “I told you all, ‘don’t take that vaccine.’ Wait a minute! Before the vaccine was made, I warned us in the Name of Allah that this was a death plot and before I went there, I told you of a national security memo by the former Secretary of State Kissinger that they had to kill or cull 2 to 3 billion people from the Earth. And Gates and Melinda … the way to get rid of 2 to 3 billion people was to offer you a vaccine,” the Minister said.

“I met that man, and that’s a Godly man! And I may well be a Christian, but I’m not telling himwhat to believe. That’s not the man everybody tells you he is,” Dr. Mikovits strongly declared.