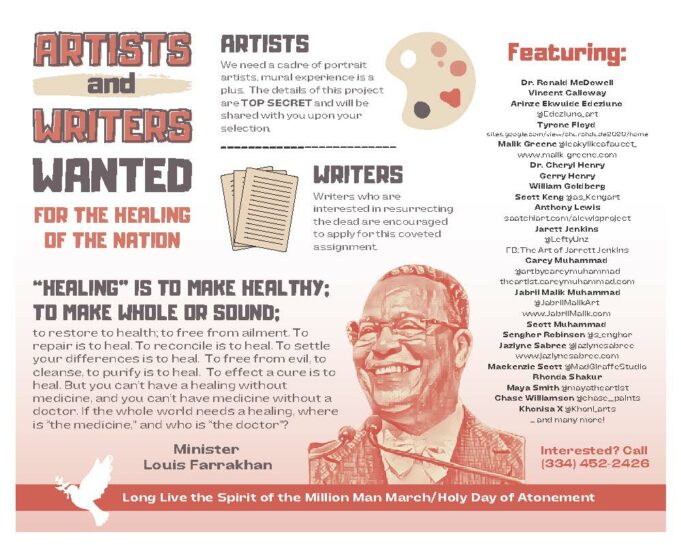 “If the whole world needs a healing, where is the medicine, and who is the doctor?” The Honorable Minister Louis Farrakhan posed that question in an article published in The Final Call on August 26, 2019. One answer to the question is emerging from Tuskegee, Alabama, a small, historic university town described by Min. Farrakhan as “the seminal fluid of the Kingdom of God.”

Mr. Muhammad and his wife Erica, co-directors of SEED Inc., developed the Atonement Memorial Garden as a way to combine their work in agriculture with their program addressing the problem of murder. In 2019, they invited families of murder victims in Tuskegee to plant fruit trees in the Memorial Garden in honor of their loved ones. The War On Murder Begins (WOMB) conference also was launched that year to explore the source, cause, and origin of murder.

During a visit to a local high school, Mr. Muhammad read a list of victims murdered in the city since 2000 and asked students to raise their hands when they heard the name of someone they knew. “By the time we got to 2015, nearly all of their hands were up. One girl exclaimed, ‘that’s my cousin’ and called her aunt on the spot. They planted a tree together for David Wright at the Grand Planting.”

SEED identifies families of murder victims in Tuskegee and holds weekly Zoom meetings to provide spiritual and emotional healing to the families of the slain, who are referred to by Mr. Muhammad as “Gold Star Families.” Families share experiences, advice, and continue in a process of self-discovery, uncovering layers of dormant hurt that prevent them from emerging from the shadows of sorrow.

The stories of Black murder victims often are truncated by news outlets reporting on their deaths, with little human interest used to describe the victims. They “tend to be three to five lines long,” Mr. Muhammad explained. “Victim identified; so-and-so murdered on such-and-such street; we don’t know who did it; if you know, call us—bye.”

The WOMB process allows students to rewrite narratives, not as murder articles but as life affirmations—reminding the community that this person existed and had value. “Project Life Affirmations” recruits high school and college students to be trained by Final Call staff on how to interview the families and present their lost loved one through the written word.

“This type of engagement between the students and the families builds empathy,” said co-founder Erica Muhammad. “Young people don’t get to hear the other side of the murder story in popular culture. They never see the suffering and long-term trauma that the family experiences after their loved one is murdered.

“We believe these interviews will be of great benefit to both the student, the parents, and the broader community,” she said. “Murder has been normalized. This condition is not normal and not acceptable. Once our children understand they have been programmed to savor Black genocide, then we can have a real movement to end murder.”

University of Alabama student journalist Sarah Clifton shares, “This project is not only a really powerful tool to address a gaping wound in the community that needs to heal, it’s also the epitome of what the goal of journalism is—talented people using their gifts for writing and storytelling for the public good. This is important work and I’m blessed to be a part of it.”

Students from the Taylor School of Architecture and Construction Science (TSACS) at Tuskegee University had already agreed to build frames to display each life affirmation. The project took on new meaning when their classmate, Reginald Summage, was murdered in March.

Dr. Kwesi Daniel, department head of architecture at TSACS, explains, “If Dr. [Booker T.] Washington were present, he would not just walk by. He would develop a curriculum to address this issue. This is what we must do if we want congruency with his spirit.”

The Life Affirmations will be presented to the Gold Star Families at an Atonement Banquet in Tuskegee in the fall.

“God says in the book of Ezekiel, ‘I will take the stony heart out of their flesh and give them a heart of flesh,’” said Mr. Muhammad. “The culture of death has hardened our children’s hearts; it’s as if they have hearts of stone. Project Life Affirmations provides a context to activate the spirit of this scripture.

“This is a direct-action initiative,” he explained. “We need young and aspiring writers to join us. We’re also looking for artists.”

Writers and artists do not need to live in Tuskegee. There have been around 80 murders in the city since the year 2000, and there are not enough local writers to complete the “Journalism 101” training, Muhammad said.

The WOMB is an evolution of work the Muhammads conducted in Chicago with Rev. James Bevel mapping out the city’s 666 murders in 2001. Tuskegee is the county seat of Macon County, Alabama, which has ranked in the top counties nationally in homicides in recent years.

Rev. Bevel has taught that all social problems have historical and psychological causes and therefore require institutional solutions. The 2022 WOMB Conference, held in April, sought to give young people an understanding of how murder came to be normalized.

In a conversation with the Muhammads about the project, Minister Farrakhan said there is murder in every city and artists in every city.  “So, if the appeal is broad and intelligent, and it’s an act of Atonement after the spirit of the Million Man March … that would be very helpful,” Scott Muhammad said.