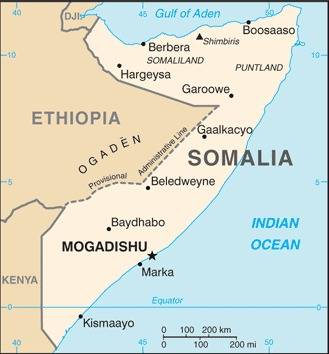 (GIN)—“Our worst fears are being confirmed—a million children of the Horn of Africa are once again set to suffer through the degrading, miserable impacts of drought.” That was the assessment of Mustafa Mohamed Omar, president of Ethiopia’s Somali region, in an interview with the Financial Times.

“Somalia is affected, Kenya is affected, parts of Oromia in Ethiopia are affected,” he continued. “We are sure such a drought is unseen in almost 50 years; people are even saying 100 years.”

At the same time, world food prices are close to record highs as the Russia-Ukraine war roils markets for staple grains and edible oils.

Aid agencies report that a fourth consecutive rainy season has failed in the Horn of Africa country, and meteorologists are warning of another below-average rainy season later this year as the world’s climate becomes more erratic.

Gabriella Waaijman, global humanitarian director at Save the Children, followed up: “It is deeply alarming and frankly shameful that the number of people going hungry is on the rise.

“Make no mistake,” she declared. “Children and their families are facing the worst global hunger crisis in decades. If we fail to act now, many lives will be lost, and years of development gains will go down the drain due to a deadly combination of conflict, the climate crisis, and the economic crisis fueled by the COVID-19 pandemic and the war in Ukraine.”

“Families at the sharp end have told our staff they are eating putrid meat, drinking dirty water from cattle troughs, and fighting off wild animals for whatever they can get their hands on to eat.”

“Nobody should have to live like this,” she continued. “Save the Children is allocating $28.5 million to communities in 19 of the worst-hit countries. But this is only a fraction of what is required.”

“What is crucial for children and their families who are going to bed hungry is an international, comprehensive package of support that does two things simultaneously: the first—providing immediate assistance to severely malnourished children today; the second—preventative measures to protect children from this crisis tomorrow.

In a world of plenty, enough food is produced to feed everyone on the planet, so hunger should be a thing of the past. However, conflict, climate change, disasters, inequality and—most recently—the COVID-19 pandemic mean one in nine people globally is still going to bed hungry and famine looms for millions.

A month into the current rainy season and rains have so far failed to materialize; if they don’t, this will be the fourth consecutive failed season as the region reels from food and fuel prices rising to unprecedented levels because of the war in Ukraine.

“We know from past experience that acting early to avert a humanitarian catastrophe is vital, yet our ability to launch the response has been limited due to a lack of funding to date,” said Michael Dunford, WFP’s regional director for Eastern Africa.

“WFP and other humanitarian agencies have been warning the international community since last year that this drought could be disastrous if we didn’t act immediately, but funding has failed to materialize at the scale required.”