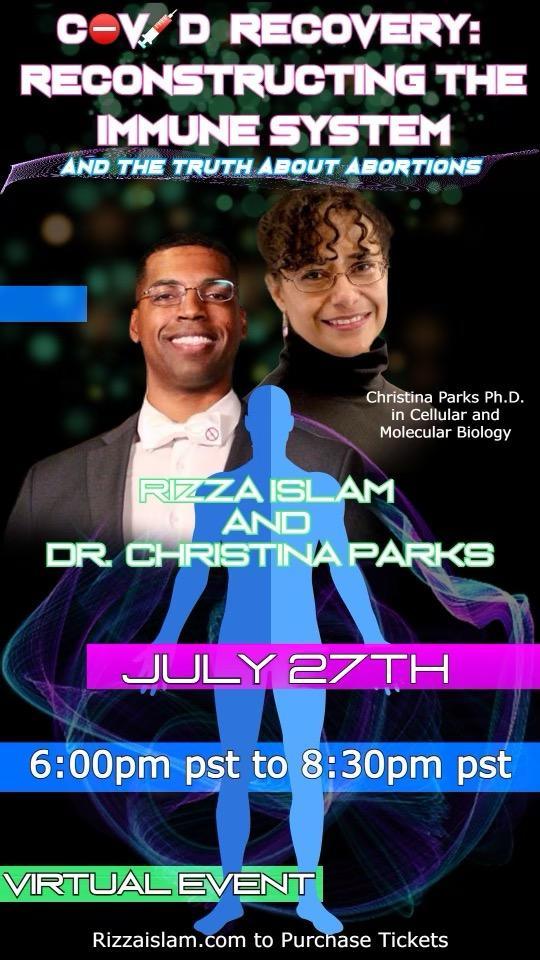 Due to all of the lies being pushed by the United States Government regarding COVID, the so-called vaccines, new viruses, lockdowns, mandates, their policies and more, Dr. Rizza Islam, an independent researcher for over two decades, also a member of the Nation of Islam, affectionately known worldwide as “Brother Rizza,” has set out to conduct a digital class with Dr. Christina Parks, educator, researcher and cellular and molecular biologist with over 30 years’ experience. She gained widespread recognition following her appearance before the Michigan State Legislature on August 10, 2021.

The purpose of their class, entitled, “COVID Recovery: Reconstructing the Immune System and the Truth About Abortions,” is to not only expose the above wicked machinations, but to arm people with the facts they need to never fall for those lies again, Dr. Islam told The Final Call.

In addition, this fearless, dynamic duo said they even plan to delve into the area of abortions and how they not only relate to vaccines, but exactly how they are being used by the pharmaceutical industry. “This system is beyond wicked, and the people need to know!” insisted Dr. Islam.

Outlined below is what participants stand to gain from the highly-anticipated event, which is scheduled for July 27, 5-9 p.m. PST.

Dr. Parks noted the idea stems from Dr. Islam’s desire to help people understand that God designed the immune system to fight viruses, and that no vaccine or drug will ever mimic its complexity and amazing efficacy.

“It’s just a matter of making sure that you’re healthy, and that your immune system is healthy,” she stated.

“It was really on both ends, because we noticed exactly how heavy the censorship is, and also we know that it’s not going to die down anytime soon,” he said.

The highly sought-after influencer is among those that have been consistently censured and attacked by Satan, who has been actively working with his media and other minions, to prevent the American public from even knowing about some of the 14 treatments and therapies in the world that the Honorable Minister Louis Farrakhan revealed during the July 4, 2020, Message “The Criterion.”

According to Brother Rizza Islam, Instagram deleted his seventh page, several posts after he announced the COVID class on July 8. Collectively, all of his seven pages had over 1 million followers in total, and his first page had roughly 542,000 followers, as a point of reference, he said. Instagram has taken down his pages roughly every two months, he calculated.

As The Final Call has previously reported, on July 16, 2021, White House press secretary Jen Psaki, the U.S. Surgeon General, and President Biden announced the names of those voices being singled out for spreading truth about the dangers of the vaccine and the availability of successful treatments. Congress, in February 2021, had pressured Facebook, Twitter, and Google heads to remove the platforms of 12 private citizens. They were accused of creating 65 percent to 70 percent of “anti-vaccine” content on the internet. They have been labeled “problematic.”

“I’m definitely sure it was linked to the COVID class, because I wasn’t heavily posting about vaccines this time,” said Brother Rizza Islam. “It was mostly me posting about the depopulation agenda, and how the government is targeting our children, using the LGBTQ movement as a cover to help children go into genital mutilation, calling it gender transitioning,” he alleged.

Thus, he wanted it to be the “COVID Recovery Class,” dealing with how to resurrect, reorganize and possibly repair the immune system, specifically for the over 200 million people in America who took the shot, and the over one billion people who took at least one dose, he said.

Possibly, he elaborated, because people “don’t know what Satan has done with these shots entirely, and if there’s a way to repair the immune system, we want to delve into that scientifically.”

They will also discuss how the immune system works and how people can activate it, including some methods people may already be doing, said Dr. Parks. It is amazing how much science there is actually behind some natural, normal things that people do, but they might put off, such as fasting, she said.

“Hmmm. Where have we heard that before?” she questioned, rhetorically. “Fasting is really powerful, and scientifically, we know this now,” said Dr. Parks.

“That’s something that I’m going to talk about that might make you go back to some of those disciplines that you had laid by the wayside, and realize that they’re not just spiritual practices, but that God laid them on our hearts for a reason,” she added.

The greatest of Allah (God’s) remedy to treat illnesses and disease is detailed in the Honorable Elijah Muhammad’s life-saving text, “How to Eat to Live: From God In Person” (Books 1 and 2).

“He (Allah) has told me there is no cure in drugs and medicine. And this, the world is now learning. We can take medicine all of our lives until it kills us, but we are still ailing with same old diseases,” stated the Honorable Elijah Muhammad, in Book 2.

In addition, said Brother Rizza Islam, the four-hour class will include a Q&A segment, and also delve into how the vaccinations have targeted and attacked the immune system on cellular, molecular, and biological levels.

“There are so many layers to this that people need to know, and they have to be armed with proper information from those who are qualified and who have the integrity to stand on truth,” stated Brother Rizza Islam.

“I say to those of us in America, we need to call a meeting of our skilled virologists, epidemiologists, students of biology and chemistry and we need to look at not only what they give us, we need to give ourselves something better,” said Minister Farrakhan during, “The Criterion.”

Dr. Parks has been working on an answer to His Divine Call.

She has started the Vaccine Injury Treatment Alliance, to gather the world’s best researchers in the area of COVID, to work on reversing the effects of some of the “most heinous injections ever known to man,” as she labels them.

During the class, she plans to discuss how she came to the knowledge that this issue was much bigger than a virus whether it was intentionally released or released by accident, she stated. She will also present scientific proof to reveal that there is a lot more going on with Covid than just a viral outbreak, she said.

“You really need to know what’s going on in order to be prepared for what’s coming. And part of that is learning not to just trust what they’re saying in the media, and to understand where the science is coming from, so that you can make the proper decisions for you and your family, what kind of treatments, how to boost your immune system … and not be functioning out of a state of fear, or out of just reactivity, when whatever happens next comes next,” said. Dr. Parks.

(Text the word IMMUNITY to 310-634-0790 to purchase tickets, $100, to join this critical class; special discount for Registered members of the Nation of Islam.)