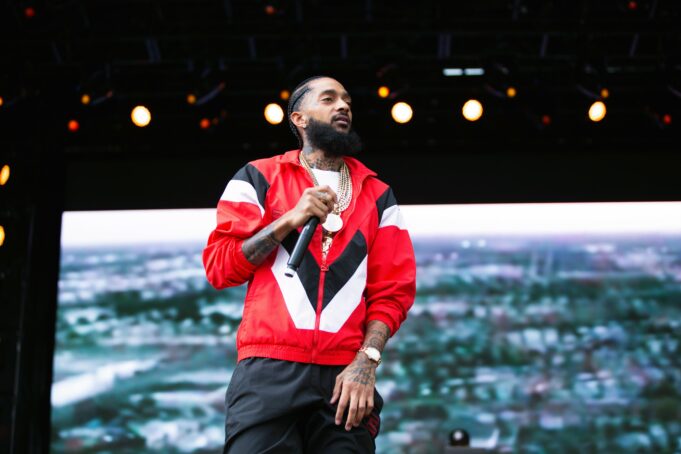 LOS ANGELES—With a formal verdict rendered, those who loved hip hop icon, community builder and voice of the streets Nipsey Hussle are repeating his mantra.

The race of life, the drive for progress and a special legacy must live on. His mantra: The Marathon Continues.

“Keep this marathon going. The marathon’s in you, it ain’t on you. The marathon, it’s a long race. That’s the motto. Life is a marathon. Run a lap,” said Herman “Cowboy” Douglas, who was among those as the trial closed and the next chapter in the saga of Neighborhood Nip goes forward.

Cowboy was among the last to see Nipsey before the self-made rap artist was shot to death three years ago outside the strip mall which housed his Marathon Clothing store in the city’s Crenshaw district.

He testified at the trial, wept a bit at times but noted how far he and Nipsey had come from the city’s vicious streets. They were proof that life can and must change.

“I miss my friend. He’s supposed to be here. We’re losing a lot of good people to senseless violence, hate, envy,” he said. Prosecutors said envy led Eric Holder Jr., who shared the same Rollin’ 60 gang roots as Nipsey, to plot and kill him. Jurors agreed and the 33 year old is facing life in prison.

But a courtroom verdict was never going to close this case fully nor conclude the story of Ermias Asghedom, known to millions as Nipsey Hussle.

Cowboy and Nipsey started in the Rollin’ 60s Crips neighborhood. They changed. A movement was created, Nipsey was the catalyst.

“If we could do it, gang bangers on the corner, anybody can do it. He was the people’s champ. He was the underdog that made it,” said Cowboy. And, he added, Nipsey left a blueprint on how to build for self.

Many are using it, opening shoe stores, barber shops, selling t-shirts in the neighborhood that draws people to the place Nipsey loved and wanted to help revive.

Even for the prosecutor who led the legal fight, the outcome was bigger than a conviction. “Today was really about Nipsey Hussle and the legacy that he leaves behind,” said Deputy District Attorney John McKinney.

After more than a day of deliberations, a jury found Eric Ronald Holder Jr. guilty of first-degree murder, attempted voluntary manslaughter, assault with a firearm and possession of a firearm by a felon. Sentencing is set for Sept. 15. Mr. Holder killed Nipsey and shot two others March 31, 2019. His public defender said an appeal is planned.

A measure of justice

The verdict means Nipsey’s family and community no longer must relive what happened, said Abdul Malik Sayyid Muhammad, the Nation of Islam Western Region Student Minister based in Los Angeles.

“Our hopes and prayer is that it brings some closure to the families and those who loved him, to the mother of his child,” he said.

Part of healing is living and fulfilling the vision Nipsey had to uplift the community, he and others agreed. The Marathon must continue, they insist.

Nipsey’s presence, spirit and energy can still be felt among the street organizations that were close to and around him, Min. Muhammad shared. Part of Nipsey’s work and even his death has helped to resolve legendary fratricidal violence in streets out West.

There is activity but calmness along Crenshaw Boulevard filled with photos of Nipsey and often with people.

Souvenirs are not in front of the shuttered Marathon Clothing store plaza but good things are still happening.

“His music lives on so his words, his guidance will live on,” observed Min. Muhammad.

Jackie Daniels, who rarely missed a day, kept coming to court. She was driven by love for Nipsey and his love for his people. She prays everyone will get a healing, a sentiment reflected by so many whether outside the downtown courthouse, near now legendary Crenshaw Boulevard and Slauson Avenue in Nipsey’s ’hood, or other neighborhoods in the City of Angels.

“Although Nipsey was taken from us, it kind of brought even more of his work and his mindset to the forefront and now you have people who opened businesses because of that, people who used him for motivation, so you know that saying, ‘Devil meant for bad, God meant for good,’ ” opined trial watcher Thomas D. outside the courthouse.

“I feel like we’ll never forget the work that he put in and everything that he did for the community,” said Slim Jxmmi of the rap group Rae Sremmurd in a recent Associated Press interview. “That’s why he’s such a big figure in our community. Nipsey was tight. He was hard.”

Rapper Rick Ross said Nipsey is admired “more than ever” these days for his forward-thinking mentality as an entrepreneur and teaching through his thought-provoking rap lyrics.

“He’s a legend, poet,” Ross, who has a tattoo of Nipsey’s face on his leg, told the Associated Press. “I loved him as a emcee when I first met him over a decade ago. I’m just happy to see the marathon still continues.”

Nipsey was posthumously given a Grammy for “best rap performance,” BET’s humanitarian award and a star on the Hollywood Walk of Fame among other honors. He was lauded for his vision for buying up the blocks where he once sold drugs and urging Blacks to own where they lived in the face of South Central gentrification and run their own businesses.

The Los Angeles City Council is expected to rename the intersection of Crenshaw Boulevard and Slauson Avenue “Nipsey Hussle Square,” according to media reports.

Daude Sherrills, a gang peace activist and executive director of the Build Plus Community Marketplace in Watts, had a special reason for coming to court. “He (Nipsey) was from the neighborhood, but he was doing something for the overall benefit of his people and his generation, and it was cut short,” Mr. Sherrills explained.

“He was doing something for his people, not his neighborhood, and we have to protect people like that.”

In interviews before the trial started in mid-June, Jody Armour, the Roy P. Crocker Professor of Law at the University of Southern California, and other prominent voices, religious leaders, gang peace activists, and entrepreneurs, talked about the community where Nipsey lived, worked and reimagined—and the marathon of challenges that remain.

There have been successes but the neighborhood still needs to be protected and built upon, they said.

The Crenshaw District is being buffeted by gentrification on all sides, according to Prof. Armour. “There’s going to be increased police patrols and prevalence, which is something that happens with gentrification, and it’s the kind of thing that Nipsey Hussle himself was very concerned about.”

But, he added, while not all developments have been good, positive things have happened. “There is a growing consciousness in the community of what we need to do; we need to organize, unify and resist some of the forces that Nipsey Hussle was himself trying to resist,” said Prof. Armour.

Muslim minister Muhammad, who has spent decades working to promote peace among street organizations and young people, sees progress and a need to keep working in that vineyard.

Many youngsters remember when Nipsey’s life was taken some 500 street organization members came together for a peace walk, said Min. Muhammad.

Nipsey’s passing helped inspire and motivate the walk across Crenshaw Blvd., to his memorial on Slauson Avenue. The area is the turf of the Rollin’ 60s street organization, but groups from different neighborhoods were part of the peace walk.

Eugene “Big U” Henley, respected as an “O.G.” or onetime leader of the Rollin’ 60s, once managed Nipsey as an artist. Today he is among those who work for peace on the streets and progress for young people.

What he saw when Nipsey passed was the rise of a generation of budding entrepreneurs, men inspired to live up to what the iconic rapper was doing.

Progress on Nipsey’s plans for a mixed-use affordable housing project, with apartments on top and businesses on the bottom, seems uncertain. His Marathon Clothing store plaza has been shuttered. But the rapper’s business base seems to be on a firm and even inspiring foundation.

“If I know one thing for certain, his legacy is actually being lived out in the guys who would have been selling drugs and cocaine and selling weed or doing whatever have you on the block,” said Mr. Henley. “They started selling t-shirts and making a profit off of his name and what he did.”

Nipsey created entrepreneurs in his absence that are still going and he changed people’s minds forever, Mr. Henley added.

Another positive is how he and others are focused on young people and improving their lives.

His nonprofit, Developing Options, was founded in 2004, to give youth choices beyond gang violence, drugs and crime. In addition to his gang intervention efforts, back to school and safe passage programs, he has been preparing to expand his organization’s efforts to help serve the homeless. He is excited to see young Black and Brown boys joining positive groups.

The key has been after school and sports programs to keep them off the streets, but right now a lot of focus is being put on the parents, who need just as much help, explained Mr. Henley.

In terms of Nipsey’s vision for economic growth and development in his neighborhood, the picture is less clear and bright, according to Min. Muhammad.

The reality is that area is targeted for redevelopment, he warned. “And it ain’t us,” he said. “So we will probably see, now that Metro (the train line) is about to open, you’re going to really see a hard hit in gentrification happening as we speak and that’s a part of the enemy’s plan.” The enemy is White developers and those who desire to take over the area.

Gentrification of the neighborhood was something that concerned Nipsey, who argued for Blacks to buy the blocks where they lived and shopped.

But Nipsey’s lyrics and legacy have stretched far beyond Los Angeles as did tributes during his 2019 passing. Remembrances were held from Los Angeles, Washington, D.C., Philadelphia, Atlanta, New York, St. Louis, Chicago, Detroit, Birmingham, Milwaukee, San Diego as well as Vancouver, Canada, and Addis Ababa, Ethiopia. Shrines were erected at gatherings where people embraced one another, often played Nipsey’s music or read poetry and shared their appreciation for his music and community-building, released balloons and lit candles.

Then there were words delivered by Minister Louis Farrakhan of the Nation of Islam at Nipsey’s homegoing service. “I close with this verse from the Qur’an: ‘Speak not of those who die or are slain in the way of God as dead. They are alive but you understand not.’ His body is dead, but the mind of Ermias Asghedom and the spirit of Nipsey is alive,” said the Minister speaking April 2019 at the Staples Center in Los Angeles.

“Like a star in the universe that comes out of a black hole. And a star dies but the light of that star traveling 196,000 miles a second is still coming from space to reach us, though the star that produced that light is dead,” he said.