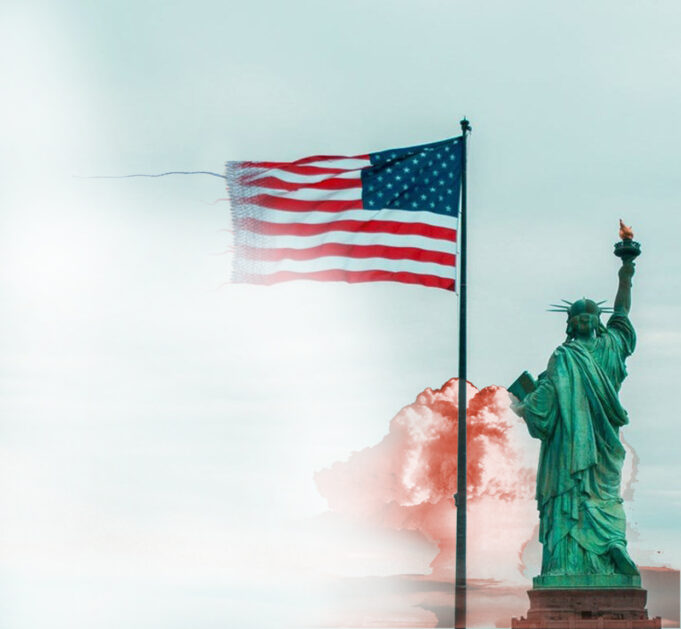 America and her European allies in the G7 grouping of foremost industrial nations and the 30-member North Atlantic Treaty Organization (NATO) met separately in two summits. Although global security, forestalling a looming worldwide recession, a worsening food crisis, and the Russia-Ukraine conflict were discussed, it was more war that was the outcome from these gatherings.

The summits of leaders occurred at a time when White world rule and western dominance is unraveling and falling. Lofty pronouncements about protecting democracy, new global alliances, Western unity, and responding to perceived threats to a rules-based international order were all touted. However, the confusion facing these heads of state in solving the crises engulfing the world, was more of the same—wars and the continuance of U.S. and European dominance, observers and analysts noted.

What is unfolding before the world was prophesized in scriptures and continues to be revealed by Allah’s (God’s) servants. The outcomes of both conferences held in late June place the world in dangerously deep waters of conflict and tension. Decisions made by America and her allies at the G7 and NATO gatherings will ultimately lead to the destruction of America as the world’s strongest military and economic power, for the tyranny, injustice, and war she has sown around the earth.

In his illuminating book, “The Fall of America,” the Most Honorable Elijah Muhammad, the eternal leader of the Nation of Islam, wrote such events bear witness to the end of White world rule, the fall of America, and the establishment of the kingdom of God.

“We do not hope for peace as long as we add to the war that which serves as fuel to a fire,” he wrote. “The fire cannot go out as long as we keep it burning by adding more fuel. A dying, burning fire is increased when more fuel is thrown into it.” His book was originally published in 1973.

“How can we expect peace where the method used to bring about peace is the same method that started the war—instead of finding a right solution and then practicing the right solution?” he asked. These times were foretold in the scriptures, which say there is no peace for the wicked and the world is in a time of reaping what was sown, the Hon. Elijah Muhammad taught.

There have been continued warnings from Elijah Muhammad’s top student, the Honorable Minister Louis Farrakhan of the Nation of Islam, that times like this would come, times of “pestilence,” “famine,” “wars and rumors of wars,” and the confusion of nations unable to find peace.

“They’re talking to themselves … they have no solution,” said Sara Flounders, co-founder of the New York based International Action Center. “It’s just meetings of real criminals and tyrants … digging in deeper than they ever have… the only thing they’re promising the world is more war,” she added.

No pathway to peace

Neither summit ended with a pathway for peace to end the Russia-Ukraine war raging in Eastern Europe. Both meetings increased military support of war, weapons and money for Ukraine and tightened sanctions on Russia—this time a ban on Russian gold.

Meeting in Germany’s Bavarian Alps on June 26-27, the G7 leaders of America, Britain, Germany, France, Canada, Italy, and Japan, announced keeping sanctions on Russia for “as long as necessary” and maintaining Ukraine with financial, military and humanitarian support “as long as it takes.”

“What they’re doing is very dangerous,” said Richard Becker, political analyst with the ANSWER Coalition (Act Now to End War and Racism Coalition). Mr. Becker told The Final Call that America holds sway in the G7 and NATO. It is dangerous, he says, because there are war hawks within the Biden administration advocating a “hyper aggressive policy” to keep America in the forefront of global domination. “It poses great dangers, I think to the entire world,” he said.

The western nations are positioning themselves for heightened war. At the NATO Summit held June 28 -30 in Madrid, Spain, its Secretary General Jens Stoltenberg announced the military alliance is increasing its backing of Ukraine and its quick reaction force tenfold to “well over 300,000” troops to better secure NATO’s eastern front bordering Ukraine. Media outlets reported that NATO later walked back the troop numbers as being aspirational, not actual.

For America’s part, President Joe Biden told journalists June 30 from Madrid that Washington is upping U.S. troop levels in NATO and establishing a permanent military base in Poland which borders Ukraine and Belarus—the chief ally to Russia. Mr. Biden said he is sending another $8 million in weapons aid. He added, during his presidency, security aid to Ukraine has reached $7 billion. “We are going to support Ukraine as long as it takes,” he said.

“I don’t know how it’s going to end, but it will not end with a Russian defeat of Ukraine,” Mr. Biden declared, giving an indication that U.S. war-ware to Ukraine will not cease. Mr. Biden is walking a tight rope by selling a stature on the world stage as a leader of the most powerful nation, but a nation unraveling at home.

His presence at NATO was different from his first attendance in 2021. Then Mr. Biden peddled his “America is back” in contrast to the “America first” posture of Donald Trump, his predecessor.

But America is anything but back as a nation wading in the heavy waters of record high inflation, costly gas and food prices, mass shootings, and controversial rollbacks on constitutional protections. Along with these difficulties are ongoing congressional hearings on the January 6, 2021, insurrection and alleged coup attempt in America, widely blamed on former President Trump.

These are indicators of the fall of America. Polling by the Associated Press-NORC Center for Public Affairs Research said 85 percent of U.S. adults surveyed believe America is heading in the wrong direction. While America is spinning in difficulties, Mr. Biden’s job approval rating has dipped to a low of thirty-nine percent.

“It really means their only program is not development, it’s more war as the only thing they’ll give money for,” said Ms. Flounders.

The G7 and NATO took aim at China, calling it a challenge to western influence. South Africa, India, Senegal, and Indonesia attended the G7 in what observers say is an effort to expand influence.

For Dr. Gerald Horne, professor of history at the University of Houston, a re-alignment among nations is taking form. “In many ways, all of this conflict … is just the precursor to a larger conflict with China,” he said. “The United States has decided that it needs backup, basically, to confront China,” reasoned Dr. Horne.

He believes that explains the presence of Asia Pacific nations at the NATO meeting. “We thought NATO was concentrated on Russia. But now we see that they have larger ambitions,” said Dr. Horne.

At the two-day NATO Summit, the military alliance rolled out its new 2022 Strategic Concept, a 10-year agenda, issued every decade. The document placed emphasis on Russia and the Peoples Republic of China as direct threats to Euro-Atlantic power. It said Russia is the “most significant” and “direct threat” to security, peace, and stability in the Euro-Atlantic area. NATO accused Russia of aspiring to “establish spheres of influence” and “control through coercion, subversion, aggression and annexation.”

In response, Russia’s foreign minister, Sergei Lavrov, said, a new “iron curtain” was descending between Russia and the West, and that Moscow would not trust Washington and Brussels “from now on,” according to UK-based publication, The Guardian.

On China, President Biden told reporters that the G7 launched a $600 billion “Build Back Better” like initiative called the “Partnership for Global Infrastructure and Investment” to compete with China’s “Belt and Road“ initiative of infrastructure development in various countries.

NATO’S document says China’s ambitious political, economic, and military footprint and “project power” challenges Euro-Atlantic security and the “deepening strategic partnership” between China and Russia is now a NATO priority. China rejected the characterizations and said NATO is resorting to “cold war thinking” and ideas of yester-year but targeting Beijing.

“Who’s challenging global security and undermining world peace?” China’s mission to the European Union asked in a June 30 statement. “Are there any wars or conflicts over the years where NATO is not involved?”

NATO is at the center of the antagonism underpinning the Russia-Ukraine conflict. The summit included the leaders of Japan, South Korea, New Zealand, and Australia from the Asia-Pacific region.

Analyst told The Final Call the involvement of the Global South nations is an expansion aimed at China. Another move by NATO was the granting an application to Sweden and Finland to join NATO which will expand the alliance to thirty-two countries. The move is considered antagonistic to Russia because NATO expansion was an original grievance of Moscow against the West.

Minister Farrakhan warned the nations, in particular America, about divine judgement and divine destruction for her evil done on the darker people of the Earth. The source of God’s anger and wrath is not just U.S. foreign policy, but the evil and murderous U.S. history against Blacks ripped from Africa and Native Americans.

Minister Farrakhan delivered a near five-hour presentation Feb. 27 at Saviours’ Day 2022 in Chicago at Mosque Maryam. His address was titled “The Swan Song.” He warned that the war in Ukraine would draw the United States in and the final result would be the breaking of U.S. and Russian power.

The Honorable Elijah Muhammad said U.S. soldiers would go away to war in the thousands and come back in the tens, added Min. Farrakhan. The war in Ukraine opens the door to the prophesized global war of Armageddon, he warned.

“Do you know how the war of Armageddon starts?” asked Min. Farrakhan. “It starts with a Messenger of God teaching people the truth. Then people fall on either side; if you disbelieve the truth then you will continue in your way,” he warned.

“The liars are so thick that you can tell the truth and the truth does not seem to move the lie. Do you know why? Because the forces that uphold the lie are upholding the lie with their power. So, the Honorable Elijah Muhammad, my teacher, said that means that it has to be physically removed. It is about to happen,” the Minister continued.

Min. Farrakhan has also warned his teacher has taught that the war in Europe would start with conventional weapons but would eventually involve nuclear weapons.